On Friday the Bureau of Labor Statistics will release its January unemployment figures. Government unemployment numbers have faced a lot more skepticism in recent months from journalists and bloggers–stemming in large part from a gulf between those numbers, which show worsening but not yet historically remarkable levels of unemployment, and the palpable sense of dislocation and anxiety in the work force. This dissonance has lent additional credibility to voices like those of John Williams at Shadowstats.com, who claims that BLS stats grossly understate the severity of the employment picture.

Now Philippa Dunne and Doug Henwood (I interviewed Henwood here) have written a short, pithy critique of charges that BLS cooks the numbers downward. Not so, they write: “Although the BLS has refined their surveys and made questions more specific, conceptually the unemployment formulas have not changed, and the BLS’s own analysis of test data shows that the impacts of several sets of changes on the overall numbers are minor.”

As they go on to acknowledge, this doesn’t mean that top-line monthly unemployment figures tell the complete story; they exclude “discouraged workers” who have stopped actively looking for work as well as those who are employed part-time because of the state of the economy. But there is another, less-publicized series of BLS data known as U6. U6 is defined as “total unemployed, plus all marginally attached workers plus total employed part time for economic reasons, as a percent of all civilian labor force plus all marginally attached workers.”

You can think of this more expansive measure as a sort of employment misery index. And in December, when the official unemployment rate rose to 7.2 percent, U6 reached 13.5 percent. The table appears below. 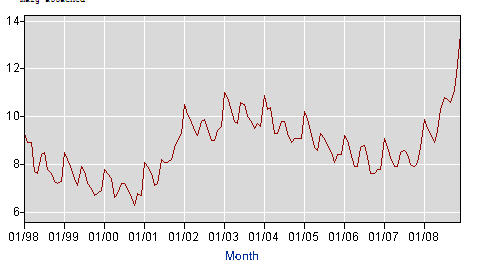 Finally, though its numbers are dated now, Daniel Gross wrote about U6 in Slate back in October.

U6: The unemployment rate and the misery index