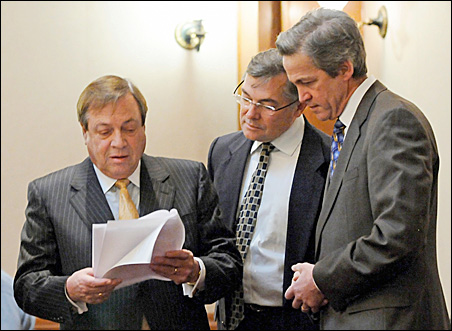 The biggest question: As Coleman’s lawyers prepare to rest their case Monday, have they proved anything?

After all, the legal burden is on them to convince the three-judge panel that Al Franken’s 225-vote recount victory should be overturned.

Have the judges been taken far enough down that path?

Another biggie: Can votes that have been counted be uncounted?

That notion was at the crux of the major legal argument today before Judges Elizabeth Hayden, Kurt Marben and Denise Reilly.

It was triggered by a legal motion that Coleman’s side filed. Coleman’s lawyers sought to have the judges examine all 280,000 absentee ballot envelopes, not just the wrongfully rejected ones. Big problem: the 280,000 ballots are now votes, already counted and unable to be matched up with their respective votes.

This idea has been the subject of a public relations battle in the hallway outside the courtroom for the past 10 days or so. But it finally reached the judges’ ears today.

It’s fair to say that, in particular, Judges Marben and Reilly revealed great skepticism of Coleman lawyer James Langdon’s point of view. Franken’s lawyer, Marc Elias, with his typical passion, kicked some legal butt today in arguing against such a notion. He even ridiculed the Coleman side for changing its strategy towards the end of their case.

Next question: Let’s review here… What is the actual role of these three judges and, when all is said and done, how could they rule?

Can they order a new election? No. Could they order another recount? Well, maybe, but what would that mean?

What can we expect in a couple or three weeks when this case closes?

Finally, there’s the mother of all questions that hang over this trial: Are all elections seemingly this muddled?

How is democracy faring so far, as Week Six is set to begin and Franken gets set to put on his case to preserve his recount victory?

Proof
As MinnPost has reported often, the Coleman side has shown that different counties and different precincts evaluated, counted and rejected similar absentee ballots in different ways.

It is possible that your absentee ballot in Hennepin County without a registered witness was counted while a similar ballot in Carver County was not.

That sounds wrong. It feels wrong.

But, guess what? Coleman hasn’t brought specific ballots and votes to the judges to show them that.

We wrote about this just a week ago: Franken’s ahead by 225; why hasn’t Coleman brought in 226 votes to prove there are enough out there to undo the recount?

Another major claim going into the trial was the alleged double-counting of votes. Again, there’s been testimony that suggests that it could have happened, may have happened.

But it hasn’t been proven. And the star witness on this, Minneapolis election judge Pam Howell, has seen her testimony tainted by repeated mistakes made by the Coleman lawyers.

Her earlier testimony this week was stricken by the judges, then allowed. Today she was to testify again, but it was discovered that Coleman’s lawyers for a second time didn’t’ disclose the existence of certain emails between Howell and Coleman’s legal team. It was a repeat offense on procedural grounds. Franken’s lawyers jumped on it.

Howell still hasn’t fully testified or been fully cross-examined. And, as we speak, the judges are pondering whether to allow her to testify.

Let’s just say that claim of double-counting is teetering.

A final key claim was the so-called lost 132 Minneapolis ballots.

That was resolved this week when the Coleman lawyers acknowledged the ballots once existed and were lost. All they’ve held back on is how many ballots there were.

For this virtual member of a virtual jury, Coleman hasn’t shown — yet — that the preponderance of the evidence can push the judges to overturn the recount.

But they have a day to go.

Uncounting
The now legendary “Friday the 13th” ruling of two weeks ago has haunted the rhetoric in the court of public opinion since then.

The Coleman side has been saying that the judges barred categories of absentee ballots that — before the start of the trial — were already part of the election tally.

There were furrowed brows staring down on Langdon from the trio of robed ones. Judge Marben, who has been economical with his words in court, couldn’t wait to challenge Langdon, in the polite way you’d expect a jurist from Thief River Falls to ask.

“How can we undo something once these votes have been cast and counted?” Marben asked. “We’re not going to be able to tie ballots to particular absentee envelopes.”

Langdon replied thusly: “I realize that your honor, but the fact that a remedy is challenging and perhaps difficult doesn’t mean that it can’t be done.”

He recommended so-called “pro rata reduction,” a math formula that would somehow theoretically calculate votes from different precincts, a process that Judge Reilly questioned as part of Minnesota law.

Elias, Franken’s lawyer, was unapologetically baffled and angered by the Langdon position. Elias went on a legal rant.

Then he found words somehow and hammered away.

“I couldn’t even begin to tell you which ballots out of the 280,000 ballots that were cast by absentee they believe were illegally cast,” he told the judges. “I don’t think they know.  I think they want is we’ll sort of take all 280,000, put them on a big forklift, we’ll take them, we’ll plop them here in the courtroom and then the court will do something.”

He accused the Coleman side of using the Feb. the 13th ruling as “an excuse” to re-order the case and move it from the topic of improperly rejected absentee ballots to accepted votes.

As for asking the court to “fix” the Feb. 13th ruling on its own, Elias said that’s because the Coleman side doesn’t have a remedy:

“Instead they wish to simply cast doubt on this process as it comes to the conclusion of their case,” Elias said, glaring at the Coleman table as he sat down at his.

The judges will rule on this soon. Don’t bet against Elias on this one.

The judges
But this leads to what Hayden, Marben and Reilly are here to do.

Minnesota law states: “The only question to be decided by the court is which party to the contest received the highest number of votes legally cast at the election and is therefore entitled to receive the certificate of election.”

For sure, we know that some additional votes will be counted. Exactly how many remains unclear. But Franken backers, called “the Nauen 61” because they are represented by Minneapolis lawyer Charles Nauen, could amount to at least 40 more votes for Franken. Others are floating around in the case. The judges still have decisions to make on other sorts of ballots.

Still, it’s unlikely, when all is said and done, that more than — say — 300-400 eventually counted votes will be ordered by the judges. That’s just an educated guess.

Once they are, the diligent judges can declare Franken the clear winner or, more conservatively, simply say Coleman hasn’t met his burden.

In talking with some legal scholars today, there doesn’t seem to be anyway the judges could order a new election.

So, it’s only a matter of time before Hayden, Marben and Reilly will have to make an historic decision; by Monday they will have heard all the Coleman team can throw at them.

The system
It could be that this case won’t be remembered for its uncertainties but for this certainty: Minnesota needs to clean up its absentee ballot act; Minnesota local election officials need to be better trained; and as Secretary of State Mark Ritchie has proposed, Minnesota needs to institute early voting.

As William Mitchell College of Law elections expert Raleigh Levine told MinnPost today: “It’s sort of like the proverbial sausage factory. You don’t really want to see it being made up close.”

Still, said Levine, “I do think we should take heart from its relative accuracy. This is so rare for an election to be this close… Given the nature of the system, I think that Minnesota has a pretty good process.”

Sometimes, watching the trial, it doesn’t feel that way.

“There is no such thing as a perfect election,” said Professor Edward Foley of Ohio State, “no election that’s error free.”

He has written about the conceptual “optimal election… you can’t have perfection, so you need some standard of optimality,” Foley said. “Like GE, when it makes a light bulb, has an acceptable error rate, you know six light bulbs per million, something like that… But with democracy, we don’t even know how to measure this.”

Here’s one way to measure it: Saturday will mark eight weeks to the day that Coleman’s term ended and no one has sat in the second Minnesota Senator’s seat at the nation’s Capitol.

Next week will mark a full four months since Election Day.

Meanwhile . . .
There’s now a kerfuffle about how and how much local election officials should be compensated for testifying at the trial.

Duluth’s elections clerk wants the city to be paid about $1,000 for his one day in court, compensating the city for his lost time.

The judges heard arguments on that today and are expect to rule shortly.