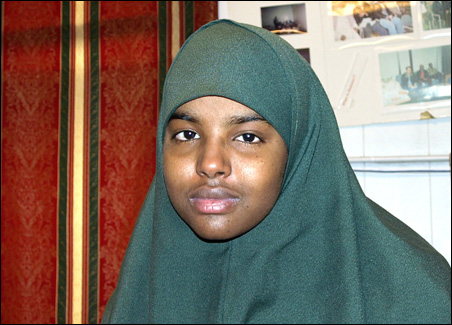 MinnPost photo by Sharon Schmickle
Fartun Ahmed, a student at Century College in White Bear Lake: “I am a U.S. citizen, and I must obey the laws. But I have rights too, religious rights.”

Muslim women dressed in flowing headscarves have become a familiar image in Minnesota’s human landscape even while debate flared elsewhere over head garb worn for the sake of Islam.

Now a bill before the Minnesota Legislature shows that this state isn’t immune to the global controversy.

The bill makes no mention of any religion. Instead, it would require that the full head and face be shown on driver’s license photos and state ID cards except for headwear needed in connection with medical treatments or deformities.

But many Minnesota Muslims feel threatened.

“I’m shocked,” said Fartun Ahmed, a student at Century College in White Bear Lake. “I respect the government and its rules and regulations . . . But I am not willing to take off my headscarf.”

The safety argument makes no sense to leaders of the United Somali Movement, a group of graduate students and young professionals in the Twin Cities. If anything, photos of bareheaded women could confuse authorities because their images wouldn’t look like the same women we see on the streets every day, they said.

“There is no need to see the hair or the head because the face is enough to recognize somebody,” said Suban Khalif, 23, a Somalia-born student at the University of Minnesota’s College of Design. 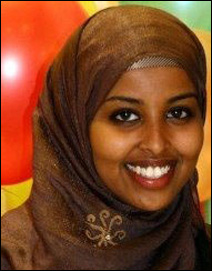 “You recognize the nose, the eyes, the mouth and that’s enough,” said Khalif who wears her hijab every day while away from home.

Whether or not it was intended, the real effect of the bill would be to curb religious freedom, she said, and to marginalize tens of thousands of minorities in Minnesota.

“This legislation will impact the lives of thousands of Muslim women in Minnesota from diverse ethnic and social backgrounds who cover their hair as an expression of faith,” she said.

A headwear ban potentially would reach beyond Muslims to affect Catholics, Jews and also Sikhs who consider their turbans to be mandatory, said Taneeza Islam, civil rights director for the Minnesota chapter of the Council on American-Islamic Relations (CAIR-MN).

“We don’t want this to turn into a Muslim issue,” she said. “We are saying this is an issue that touches all faiths in which believers wear something on their heads.”

As for the safety concerns, she noted that the State Department allows religious head coverings to be worn in U.S. passport photos and the Transportation Security Administration allows them to stay in place at airport checkpoints.

Minnesota Muslims plan to air their arguments against the bill on March 10, when they are scheduled to meet at the State Capitol as part of a national movement called “Muslim Day on the Hill.”

Started with police
The bill, introduced on Feb. 19, has a long way to go before it becomes law, especially in a year when legislators are swamped with financial woes.

Gottwalt and his legislative assistant did not return my phone calls about it. But I talked to one of the seven co-authors, Rep. Larry Hosch, who is a DFLer from St. Joseph and also the assistant majority leader. 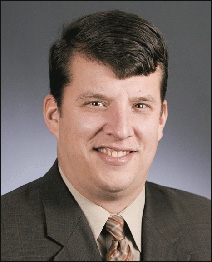 Hosch said the idea for the bill surfaced when Stearns County legislators met with police chiefs and representatives of the sheriff’s office. The law enforcement officials expressed concerns about hats, bandanas and other garb that covered distinguishing features in some photos.

“They brought up the issue and asked that it be addressed,” he said. “My understanding was that they weren’t getting a full view of some facial features.”

If anyone thought at the time about accommodation for the thousands of Minnesotans who express their religion in their headwear, it wasn’t reflected in the bill. Now, Hosch said, he hears the Muslim pushback and thinks there may be “reasonable solutions” for the worries.

Cultural friction
Alarm over the bill reveals yet another face of the cultural friction Minnesota has felt as long-term residents and recently arrived immigrants learned to live together.

Often it has not involved deliberate discrimination but rather bruised sensitivities in the course of day-to-day life.

Some of the more visible flare-ups came when some Muslim taxicab drivers refused to haul passengers who were carrying bottles of liquor, when Muslim clerks balked at handling packages of pork in checkout lines and when some non-Muslims objected to special public facilities for washing feet before prayer.

As a visible symbol of Islamic consciousness, the headscarf has been an especially sensitive issue not only in Minnesota but across the nation and the non-Muslim world.

Last summer, CAIR-MN launched a bias complaint against Old Country Buffet in Fridley after a Muslim teenager said she was denied a job because her scarf didn’t fit with the wait staff’s uniforms. The restaurant quickly apologized and invited her to complete a job interview, Reuters reported.

Never bareheaded
It may not be easy for many non-Muslims to fathom why someone would object to lowering a scarf for a single photo or for a shift at work, especially given that some devout Muslim women wear no scarves or simply drape them loosely around their necks.

Fartun Ahmed met me on Tuesday at the Dar Al-Hijrah mosque in Minneapolis to explain in her own personal terms why she never would consider walking bareheaded in public.

Now 18, Ahmed arrived in Minnesota as a toddler. She grew up in places — Owatonna, Mankato and Hopkins — where there were few Muslims at the time.

“I was so immersed in American culture and I didn’t want to be different from the others,” she said. “The only way to fit in was to be like them, dress like them and act like them. . . . Not many people knew what religion I was. I didn’t pray, didn’t do anything associated with Islam.”

Something was missing in her life, though, and while in high school in Minnetonka she became active in the Minneapolis mosque. As she shifted spiritually closer to her traditional beliefs she gradually covered her hair — first with a bandana, then a small scarf and now a flowing hijab.

No one ordered her to do it. It was her choice. And she defends it with a firm and deep resolve.

“I would never walk outside without my hijab, never,” she said. “Of everything in my life, religion now comes first. If I take it off, I disobey God.”

(Views differ across the Muslim world about whether the religion mandates a full head cover. Ahmed said it is up to God, not her, to judge those who choose not to wear it.)

Ahmed also expressed a sense of mission in wearing the garb as an affirmation of her Islamic identity: “It’s my duty as a Muslim woman to represent Islam in a clear and profound way.”

No one in her high school or college has given her a moment’s harassment for choosing to wear the hijab, she said.

“They respected me a lot and they showed it,” she said. “They invited me to their houses. And when we chose partners for activities, someone would always choose me.”

That is why the notion of a Minnesota law that could force her to bare her head came as such a shock. She struggles to believe that no one thought of the potential impact on religious rights.

“I am a U.S. citizen, and I must obey the laws,” Ahmed said. “But I have rights too, religious rights. . . . Will they take away your driving privileges if you don’t do this? Go ahead. Take them away. I am not compromising for my religion no matter what happens.”

A symbol and a flashpoint
The uproar in Minnesota echoes worldwide controversy over the Muslim veil — known in its various forms as the hijab, khimar, abaya, niqab, burqa and other names.

In one form or another, the veil represents the concept of hijab, an Arabic word meaning barrier or partition, according to an in-depth BBC report. In the early days of Islam, it stood for a curtain separating men and women — especially the wives of the Prophet Muhammad, while they talked to one another, the BBC said.

Today, the concept signifies modesty in behavior and dress for both men and women.

Like Ahmed, many Muslims are distressed to see their symbol of modesty become a flashpoint around the world. But, indeed it has — especially in the wake of the attacks on Sept. 11, 2001, and other terrorist actions committed by Islamic extremists.

The drivers’ license issue has come up in at least two other states.

In 2004, some Alabama officials refused to grant licenses to Muslim women who would not remove their scarves for photos. After much debate, the governor issued rules saying that head coverings were acceptable for religious beliefs, the Associated Press reported.

This week, the Oklahoma House of Representatives passed a bill that would ban “anything that covers or partially covers the head and shoulders” from being worn when photographed for a drivers license or identification card.

Soccer fields to courtrooms
Muslim women in the United States and other countries have been kicked off soccer teams and turned away from swimming pools because of their scarves.

Several disputes about scarves in the workplace have gone to courts around the country, including one in Philadelphia where a police officer was sent home and ultimately suspended after she repeatedly reported for work wearing her hijab. She filed a religious discrimination complaint, but a U.S. District Court judge ruled in the city’s favor in 2007.

The U.S. controversies are mild compared to those in France where students in state schools and workers in government offices were banned from covering their hair. Italy has a law against covering the face in public. And the Dutch have moved to ban the head-to-toe burqa or the niqab which covers everything but the eyes.

Some of the trickiest disputes have centered on the niqab because it covers the face. In Toronto, a court is contemplating a sexual assault victim’s request to wear her niqab while testifying, the Globe and Mail reported. The court must weigh her religious freedom against the rights of the two defendants to face their accuser in open court.

Like being naked
At CAIR-MN, Taneeza Islam struggled to explain the powerful sense of obligation that emboldens Muslim women to stand up to so many challenges around the world.

“I don’t know how to stress enough this sense of obligation,” she said. “But if a woman chooses to wear a head covering under the religion of Islam, … taking off the head scarf is akin to being naked in front of those who are proscribed to see your hair.”