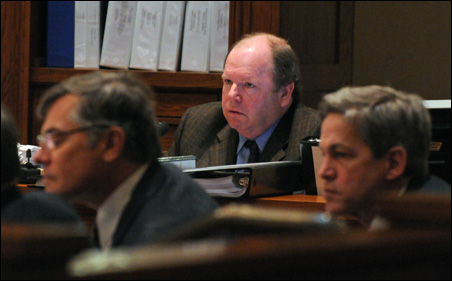 AP Photo/Richard Sennott
Ramsey County Elections Manager Joe Mansky testified at today’s session. Norm Coleman and Tony Trimble, one of his lawyers, are in the foreground.

When the Norm Coleman-Al Franken election contest resumed this morning, Donald P. Simmons’ rejected ballot — “Exhibit F2232” — became yet another of the thousands to be offered and received into evidence over the course of the past 31 days of litigation.

But Simmons’ ballot was different.

Donald Simmons is dead, and today there was a question as to whether his vote, cast by absentee ballot on Oct. 29, should count.

In as polite, but lawyerly, a way as one can, given the delicate circumstances, Franken attorney  Kevin Hamilton had this exchange with Ramsey County Elections Manager Joe Mansky:

“Now, Mr. Simmons, he was a properly registered voter at the time when he cast the ballot, was he not?” Hamilton asked.

There was a pause as Hamilton re-examined the documents in front of him.

“Do you know that he was a properly registered voter at the time he cast his ballot?” Hamilton asked.

“I don’t know that,” Mansky said. “The reason I say that is I looked up the voter record here. He has deceased status. What we don’t know — since this was printed out recently — if he was eligible on election.”

Hamilton: “What we do know is that registration was updated on May 2008 … We know he was alive on Oct. 29, 2008. You’re raising the point that his status [in state records] is deceased … If he passed away prior to Nov. 4, then his ballot wouldn’t be eligible to be counted.”

Hamilton: “You have to be alive on Election Day.”

Said Hamilton: “As long as you’re alive at some point on Election Day, your ballot should count.”

Hamilton: “So what we need to figure out is the time or date of death.”

Who was he?
Donald Simmons died on Thanksgiving Day, Nov. 27. He was 65 years old.

He died of a liver disease. He was awaiting a liver transplant. It didn’t come in time.

Mr. Simmons and his wife, Janet Troutman-Simmons, moved to St. Paul in 2006 from Springfield, Mass. He had been the head of security for a company there. He was a jazz lover.

He was already ill, and the couple wanted to be closer to their children. They found Minnesota to be welcoming, and they were happy here.

On Oct. 29, knowing he was too ill to get to the polls, Simmons voted via absentee ballot.

The election was important to Simmons, his wife of 27 years said.

“He had always been interested in politics,” Troutman-Simmons told MinnPost this afternoon in a telephone conversation. “Both of us. The whole family really. My father and mother were poll workers in Massachusetts. They got a citation for never having missed voting since they registered many years ago. We were a family that voted all the time.”

She went on: “We were especially interested in his being able to vote for the president because we’re African-American and this was an opportunity to see this happen for the first time. We knew [Barack Obama] would need all the support that he could get.”

Recently, a letter arrived at the Troutman-Simmons home in St. Paul. It told her that Donald Simmons’ absentee ballot had been rejected, perhaps wrongly. Inside, she thinks, was a subpoena for Mr. Simmons to testify at this trial.

Soon after, someone from the Franken side telephoned her, she said.

“I informed them he wouldn’t be able to appear because he was deceased,” she said. “I wondered why it wouldn’t count.”

Why?
Actually, it’s unclear why Donald Simmons’ ballot was rejected on Election Night. That’s what this trial is about, getting lawfully ballots that were wrong rejected into the final recount.

But it’s clear, now, he was registered. How else would the secretary of state’s office have changed his listing to “deceased” if he wasn’t already in its system.

Mansky, one of the state’s most respected elections experts, said there’s really no way to know that any absentee voter is alive on Nov. 4 after he or she votes a few days earlier.

Just like felons or 17-year-olds or citizens of France who might vote in person on Election Day, there is a presumption that people are following the law.

If, after Election Day, it is determined that a voter had violated state law, the county attorney will go after that scofflaw. But you never know.

In Mr. Simmons case, we know. He seems to have followed all the rules.

He lived to see Obama elected. But the Senate seat for which he also cast a ballot is still undecided.

Confirmation
Over today’s lunch break, Hamilton obtained a copy of Simmons’ death certificate from the state Department of Health.

Mansky was back on the witness stand with a copy of the death certificate in his hands.

Said Hamilton: “Mr. Mansky, this is the same individual that we were discussing before the break, correct?”

“That is correct,” Mansky replied, economically.

“Can you read the name and the date of death of this voter.”

“The person’s name is Donald Peter Simmons and the date of death was November twenty-seventh, twenty-oh-eight,” Mansky read.

“OK, November 27th,” Hamilton repeated. “So, he was alive on Election Day. His vote should count.”

Throughout this trial, lawyers on both sides have said — truthfully — that no one knows exactly how anyone voted. But each side has its own intelligence and lists.

Still, no one, for sure, has seen the ballots. No one will know, for sure, until the three-judge panel orders the secretary of state to open ballots.

But today Janet Troutman-Simmons confirmed, without hesitation, “I know who he voted for,” she said. “He voted for Franken.”

It’s become a cliché here at the Minnesota Judicial Center. It’s been said repeatedly that “every ballot tells a story.”

Donald Simmons’ ballot spoke volumes. And, if the system truly works, one day Mr. Simmons’ vote will be counted, too.

Coleman-Franken trial: Every ballot DOES tell a story — will a dead man’s vote count?