WASHINGTON, D.C. — Despite President Obama’s campaign promise to reform earmarking, the debate over the oft-criticized spending measures that specifically funnel money to a lawmaker’s state or district rages on this week in Congress and within Minnesota’s delegation as the Senate prepares to vote on the $410 billion omnibus spending bill.

The bill, which will fund the government for the remainder of this fiscal year, includes 8,570 earmarks worth $7.7 billion, or less than 2 percent of the total bill, according to a new report by Taxpayers for Common Sense in Washington.

In total, Minnesota could get roughly $313 million through earmarks, according to preliminary estimates by Taxpayers for Common Sense, which has not completed its full analysis of the bill.

The money would flow to a wide range of areas and interests in the state, including millions for roads and bridges, $20 million for the Central Corridor light-rail that would connect Minneapolis to St. Paul, hundreds of thousands for the University of Minnesota and money for programs to help troubled youth, and soil and cereal disease research.

While some in Minnesota’s congressional delegation call this spending “pork,” those that requested it say that it’s necessary.

Either way, the larger argument over earmarking remains multi-fold and unsettled, said Bill Allison, a senior fellow at the Sunlight Foundation, a nonprofit that advocates transparency in government.

“Members of Congress will say that they know their district and the needs of their district and if they can’t earmark, they really aren’t doing their job for their constituents,” said Allison. “But arguments against earmarks have been that they can end up being a gateway drug to corruption.”

The bill’s spending measures were set in place last year, but Congress was unable to reach an agreement with President George W. Bush. Obama has used this timeline to his advantage in an effort to avoid public conflict with the Democrats in Congress, painting the legislation as a leftover from the Bush era that he intends to sign, despite its earmarks, while at the same time hinting at a tougher stance on so-called “pork-barrel” spending in the future.

Minnesota and other states
Compared to other states, Minnesota’s earmark money fell somewhere in the middle, according to preliminary estimates of the data compiled by Taxpayers for Common Sense.

Similarly, Minnesota’s senators came in somewhere in the middle of the pack with their earmark requests. Democrat Amy Klobuchar requested six earmarks on her own, totaling $4,740,000. Meanwhile, then-Sen. Norm Coleman, a Republican, requested eight earmarks on his own, totaling $1,055,000. 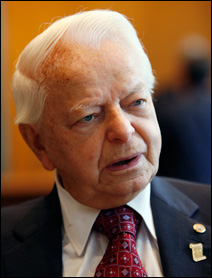 As far as the Minnesota delegation on the House side, Democratic Reps. Keith Ellison and Betty McCollum, from the Twin Cities, had their names on the most earmarked money, each requesting about $50 million, according to preliminary estimates.

Meanwhile, Democratic Rep. Jim Oberstar, who had his name on about $33 million in earmarks, had the most solo requests of the Minnesota House members. Oberstar requested about eight earmarks on his own, totaling around $6,516,000.

Unabashedly in favor of bringing money into his district, Oberstar said that earmarks are a way to get money to people who need it when “the state isn’t doing its job.” 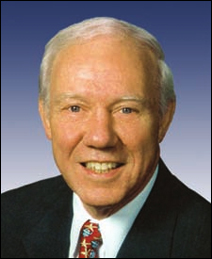 “They [earmarks] are a way for citizen concerns to be heard and responded to when they have tried through the normal procedure… and they don’t get their fair share and their needs are neglected and ignored,” Oberstar said. “This is a way for them to petition their member of Congress, who votes on these things and for whom they vote.”

Harmful effects
But, while earmarks may be good for a district, they could have harmful effects on the country as a whole, said Allison.

Allison used earmarked funding for health research as an example. In order for a lab to get federal funding, the researchers usually have to submit a proposal to a government agency like the National Institutes of Health. The proposal then goes through a rigorous peer review process where other professionals in the field evaluate its merits.

Congressional earmarking circumvents that process, directing federal dollars to researchers that a lawmaker or their staff deems as worthy, said Allison.

“You have them making decisions that are way beyond their level of expertise or the expertise of the staff… That just isn’t a good way to spend money,” Allison said. “Even if those programs are good, we are potentially missing out.”

Allison also pointed to the heavy weight given to a member’s seniority and committee assignments as a flawed piece of the earmarking system.

“A lot of times the amount that a member can get for his district depends on his seniority and the type of committees he is on,” said Allison. “You end up with a distorted government.”

Minnesota Republican Reps. John Kline and Michele Bachmann have been vocal about their disdain for earmarking. Both refused to request earmarks in the omnibus bill and voted against it when it passed the House last month.

“Over the years, the congressional earmarking process has evolved into a corrupt and broken system with no regard for merit,” said Kline’s spokesman Troy Young. “Mr. Kline’s constituents demand increased transparency and deserve the assurance that federal spending decisions are based on merit.”

While Kline and Bachmann have won praise for their hard-line stance on earmarks, they have also drawn some criticism.

The Star Tribune reported that Kline’s position on earmarks was met with disappointment last January by some members of the Scott County board who were looking for federal dollars.

At the time, Kline remained unworried that his position on earmarks would affect his ability to win re-election, and he was right. Kline cruised to victory last November against Democrat Steve Sarvi.

Allison warned, however, that lawmakers who do not bring enough money into their states or districts leave themselves open to being painted as disconnected with their constituency and could be looking at re-election problems down the road.

Allison pointed to former Rep. Phil Crane, R-Ill., as one extreme example. Crane served from 1969 to 2005, and at the time of his defeat was the longest-serving Republican member of the House.

While there were arguably many reasons for Crane’s downfall, Allison pointed to his stance on earmarks as a contributing factor.

“He was someone who year after year refused to get earmarks out of principal, but it eventually got to the point where his people were really fed-up,” said Allison.

The key to good earmarking is to strike a balance, Allison said.

“If you got in every earmark you wanted, you’d probably be hurting the country,” said Allison. “But if you refuse to get the things to your district that it really needs, you’re probably hurting your constituency.”