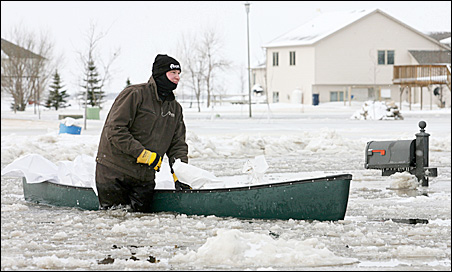 GRAND FORKS, N.D. — It all seems eerily and ominously familiar to people in the northern Red River Valley who fought but ultimately failed to hold back the 1997 flood: the rising water, the frantic sandbagging, the ever increasing crest forecasts.

“Stand and defend,” Fargo officials declared Friday morning, vowing to hold back the river despite a new National Weather Service forecast that pushed the expected crest there to 42 and possibly 43 feet on Saturday, stunning leaders who had worked around the clock for days to protect against a record crest of 41 feet.

Thousands of volunteers helped raise the city’s dikes to 43 feet Thursday, more than 3 feet above the river’s 1997 crest in Fargo, and stockpiled another 500,000 filled sandbags at the Fargodome overnight, ready for transport to areas where contingency dikes may be raised behind at-risk first-line dikes.

In Moorhead, Minn., officials strongly urged residents of a large area south of Interstate-94 and west of Eighth Street to evacuate Thursday night, while Fargo sent police officers and guard troops door-to-door in a south-end neighborhood to evacuate residents of a senior living center and about 35 homes after cracks were found in earthern dikes.

Crest period could be seven days
All dikes were holding Friday, and the National Guard was organizing “rapid response teams” to deal with problems that might arise with the earth, sand and clay defenses as the cities settled in for what could be an extended crest period, as much as seven days.

Because of heavy snow that blanketed the region in recent days, followed by freezing temperatures that will hold that new moisture back, Grand Forks was told it may expect two crests. The first, at 50 to 53 feet, should come Monday or Tuesday, the weather service said.

The 1997 flood, which overwhelmed Grand Forks and East Grand Forks and caused as much as $2 billion in damage, topped out at 54.4 feet. With massive federal and state help, the cities since have raised a permanent flood protection system intended to protect to 60 feet.

Non-essential travel banned in Fargo
Fargo has banned non-essential travel on most major thoroughfares in the city to allow sandbag trucks and other emergency workers to get to their destinations quickly. West Acres Mall closed Friday, and Walaker asked other “non-essential businesses” to close.

“Take the day off and let people help their neighbors, help their friends,” he said. “That would help us tremendously.”

Officials said Fargo’s water and waste-water treatment plants both had been protected to 44 feet and were operating Friday.