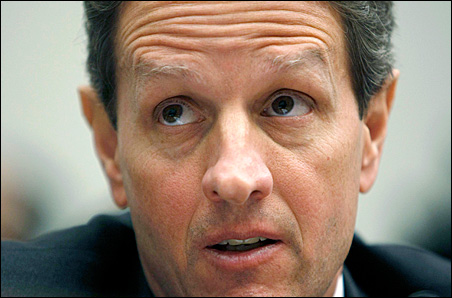 Democrat Keith Ellison, who sits on the House Financial Services Committee, calls the plan “promising.” But Minnesota’s other panel members, Republicans Michele Bachmann and Erik Paulsen, expressed reservations, saying the plan puts taxpayers too much at risk. All say they want more information about the proposal.

The plan Geithner unveiled Monday relies on private investors buying at least $500 billion of so-called “toxic” assets in hopes of loosening credit markets. To entice investors, the government will offer low-interest loans to finance the purchases and will share in the risks if the assets fall further in price.

Ellison said Tuesday he wished that a similar public-private partnership plan had been developed sooner.

Last fall, the Bush administration abandoned its own plan for addressing the backlog of toxic assets because of difficulties in determining the value of the assets.

“This is the kind of thing we should have seen already,” Ellison said.

Midwest reaction
Wall Street apparently agrees. On Monday, when Geithner  announced details of the plan, the Dow Jones industrial average shot up to almost 500 points —  a rally of almost 7 percent, its best day of 2009.

Joe Witt, president and chief executive officer of the Minnesota Bankers Association, put a Midwest spin on the reaction.

“A lot of our conservative Midwest folks are very much [in favor] of market driven” solutions, said Witt. “I think a lot of the pure bailouts we’ve seen, whether AIG or investment banks, that hasn’t been viewed very positively by folks in the Midwest. But the fact that this is very much a private sector- public sector partnership … I personally think that plays a lot better.”

Under the Public-Private Investment Program, taxpayer funds would be used to start partnerships with private investors who would purchase the toxic assets. The government would run auctions between the banks selling the assets and the investors seeking to buy them. The goal would be to leave it up to the investors to decide how much the toxic assets are worth.

But, as some critics have pointed out, the private investors would be in a plum, almost risk-free, situation. The government could lend them 95 percent of the money for an investment and would shoulder most of the losses if it turned out to be a bad bet. Meanwhile, if the assets rise in value, the private investor stands to make lots of money.

“The investor has a sweetheart deal … the risk is completely born by the taxpayer,” said Bachmann.

Paulsen seemed to agree. “Congressman Paulsen continues to analyze the details of this plan, but he has serious concerns about continued taxpayer exposure,” said Paulsen spokesman Luke Friedrich.

Although Witt generally viewed the plan positively, he said he wondered whether the recent uproar over AIG bonuses would dissuade investors from partnering with the federal government.

“There is a fear right now that Congress is so reactionary to things like AIG that they overreact,” said Witt.

Bachmann went broader. “Private investors really, when it comes down to it, don’t like doing business with the federal government,” she said.

Will banks take part?
Jonathan Scharlau, a chartered financial analyst with SilverOak Wealth Management in Minneapolis, warns that problems could also arise on the seller side of the equation.

While Scharlau said that he liked the overall plan, he had questions about its workability.

“The big question is how many banks will take part,” said Scharlau. “If you have already written down some of your bad assets, what is the incentive?”

Scharlau also said that the time it will take to roll out the program adds uncertainty.

“Basically, they will take applications in May and have things in place by September,” said Scharlau. “A lot can happen by then.”

Of course, Minnesota lawmakers and financial experts are not alone in their disagreements and questions.

Giants of the financial world, including Nobel Prize winning economists, disagree on the merits of  the program.