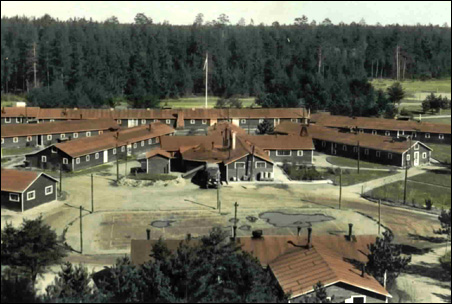 A panorama of a typical Civilian Conservation Corps camp in the 1930s.

How do we create jobs, rebuild the country’s crumbling infrastructure and reinvigorate the value of national service?

Barack Obama listed these goals as key parts of his third-way presidential administration. Perhaps he should talk to people like Len Price, whose blueprint for a program to accomplish all this has been around for more than 75 years.

A former DFL legislator, Price is executive director of the Minnesota Conservation Corps, a nonprofit organization that traces its legacy to the Civilian Conservation Corps of the New Deal. Granted, skeptics would say there’s only a passing comparison between the army-sized CCC of the 1930s and today’s MCC, which underwrites public-service jobs for fewer than 100 young adults each year and provides eight-week summer conservation experiences for a hundred or so teenagers.

Compare that to the 77,000 single men who “enlisted” in Minnesota’s CCC between 1933 and 1942 and lived in some 160 military-styled camps throughout the state. (For a list of where those camps were located, go here.)

Working for a dollar a day, the young men planted more than 123 million trees — basically reforesting land in northern Minnesota that had been clear-cut and left barren by the timber industry. They spent 283,000 man-days fighting forest fires and an equal amount of time working on fire suppression and prevention. They built 149 fire lookout towers. They constructed 4,500 miles of new roads and did maintenance on 23,000 miles of existing roads. They strung 3,300 miles of telephone lines. They built structures, including magnificent log buildings, in Minnesota’s state parks, which grew from 30 to 47 parks during the CCC decade.

In Minnesota’s agricultural areas, CCC “boys” engaged in soil conservation efforts on more than 160,000 acres, building small dams and spillways, digging hundreds of wells and constructing numerous bridges. Their efforts can still be seen today in the curved, contoured fields of southern and western Minnesota and in the terraces and woodlots they created on steep slopes.

“There’s always a difference between then and now, but there are plenty of people — young people in particular — who would embrace this kind of opportunity,” Price said. “There are people willing to do it. They just need the motivation and structure to make it happen. Maybe now is the time to find the stimulus to get things rolling again.”

‘Alphabet agencies’ beefed up numbers
Those who say the New Deal didn’t end the Depression and may even have exacerbated it tend to ignore the crisis that was addressed by Franklin Delano Roosevelt’s “alphabet agencies.” In 1933, the average enrollee in the CCC was 10 pounds underweight and shorter than average height. He was, in a blunt word, malnourished. During the standard six-month enlistment, the typical “C” gained 10 pounds and grew an inch.

The CCC program was launched with a speed that is astonishing. A product of FDR’s first days in office, the act creating what became the CCC passed through Congress on March 31, 1933. The first CCC camp opened a week later and within six months there were 1,520 camps in operation across the country, with a total enrollment of 249,000 unmarried men between the ages of 18 and 25. 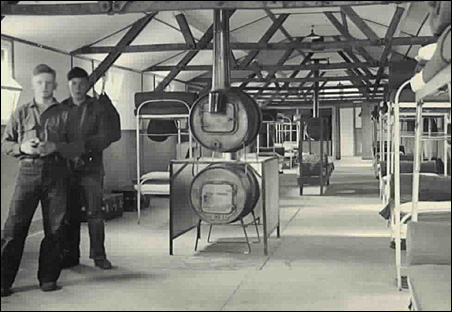 One of those enrollees was my father, a skinny 18-year-old from a small hamlet in West Virginia. Like most of the 3 million men who eventually joined the CCC to serve enlistments that ran from six months to two years, my dad was thrilled by the opportunity to earn $30 a month — with the requirement that $25 of his pay went to his family back home.

As it turned out, his enlistment lasted only a few weeks; his father, my grandfather, suffered a massive stroke and my dad was “discharged” to return home to take care of his parents.

Many years later, when I came home on leave after completing Army basic training, my father nodded knowingly when I described barracks life. “Just like the Cs,” he said.

And it was. The typical CCC camp of about 200 men was operated in military fashion by Army officers and NCOs. In most camps, the men lived in prefabricated barracks buildings that were hauled to remote areas and set up almost overnight. The “boys” were given food — “three hots and a cot” — and initially wore surplus World War I uniforms.

During the day, the enrollees worked under the supervision of various agencies, including the U.S. Forest Service, the National Park Service and the Soil Conservation Service, along with state forest and park services and even municipal park authorities. The camps also employed “Local Experienced Men” (LEMs) to teach on-the-job skills to the young “Cs.”

Free time, what they had of it, was often devoted to completing academic classes. In 1933, the average enrollee had an eighth-grade education. Many completed high school during their CCC years, and some ultimately got college and graduate degrees.

CCC’s work lives on in state parks
Among their lasting accomplishments, the CCC built more than 500 so-called “rustic-style” buildings in Minnesota’s state parks. Some were magnificent — such as the massive stone and log Forest Inn in Itasca State Park or the three-story log headquarters building of the Forest Service in Cass Lake.

“They had the time and the labor to do everything exactly right — or do it over,” said Rolf Anderson, an amateur historian from Bloomington who has written studies on CCC projects.

“In the case of the Forest Inn, one horizontal joint the entire full length of a wall didn’t feel rustic enough, so it was torn down and built again,” Anderson said. “That kind of quality was unique for its time — and for any time.” 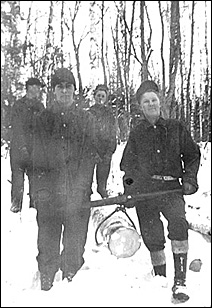 “Some of those boulders weighed a ton,” said Sundberg, who since 1983 has lived in a park ranger’s log house that was built by CCC workers. “It’s amazing when you think about it.”

The CCC program was disbanded shortly after America’s entrance in World War II, and it’s been said that one of its inadvertent legacies was the creation of a generation of men who were accustomed to the military lifestyle.

Unlike the Works Progress Administration, which put its WPA stamp on everything, including nearly every square of most city-park sidewalks, the CCC left little imprinted with its name. The 4,500 CCC camps quickly disappeared, the buildings taken down and hauled away, burned or left to quickly rot away.

Camp Rabideau is historic landmark
One exception — and it’s a major one — was Camp Rabideau, located in the Chippewa National Forest about 20 miles northeast of Bemidji in Beltrami County. During World War II, the camp was used to house German POWs. After the war, the camp was used for decades by the University of Illinois for summer programs.

“It could be the most historically intact CCC camp in the nation,” said Andrea LeVasseur, an archaeologist at the Forest Service’s office in Cass Lake.

Camp Rabideau, which is open to the public during the summer months, includes 13 of the camp’s original 25 buildings.

“They were mostly prefabs that were shipped in on rail, trucked out and put together by a CCC group from Missouri that never got over the weather up here,” LeVasseur said. “There are several barracks and officers quarters, a hospital, mess hall and education building. It’s a beautiful setting, too.”

The camp was placed on the National Register of Historic Places in 1976. And in 2006, it became one of Minnesota’s 22 National Historic Landmarks. To learn more about Camp Rabideau, go here.

And to read more about the Civilian Conservation Corps in Minnesota, find a copy of Barbara W. Sommer’s “Hard Work and a Good Deal,” published by Minnesota Historical Society Press.

Sunsets for some; sunrises on the horizon?
As a group, the veterans of the CCC are seeing their final sunsets. In 1996, while I was employed by the St. Paul Pioneer Press, I covered the annual reunion of the National Civilian Conservation Corps Alumni Association when it was held that year in Rochester, Minn. At the time, the St. Louis-based organization had 8,700 dues-paying members. Veterans who belonged to local organizations instead of the national probably swelled active alumni participants to 15,000, I was told.

Since then, the St. Louis headquarters has closed and its CCC artifacts and archives have been transferred to an organization called the Civilian Conservation Corps Legacy, located in Virginia.

Minnesotans remain active, says Mary Halbert of St. Paul, whose husband, Ralph, was a CCC enlistee working at a camp near Two Harbors. In 2007, corps alumni helped place a statue of a CCC worker at Gooseberry State Park, near the extraordinary wall the boys built in the 1930s. And last year, the local group helped restore a monument that was built in St. Paul’s Phalen Park in 1937 to honor some 7,000 CCC workers who died while in service.

The monument, about five feet in height, contains stones from every state and four federal buildings.

CCC veterans pose in front of a monument to CCC workers. Click on photo to enlarge

“We may pass, but the memory of what the CCC did deserves to be remembered,” Mary Halbert said.

Indeed, many think the corps, or something like it, should be revived.

“In the 1930s, it did not seem difficult to man these camps with 200 young men and live in remote areas,” historian Anderson said. “Whether that could be achieved today is a question mark. I’ve often felt the approach the CCC took could be adapted, but it may not be possible to replicate it.”

But there’s no doubt that veterans of the CCC remember a life-changing experience. Back in 1996, I remember listening as Jim Ronning, a Rochester resident, talked about the CCC with great pride and emotion. A farm kid from Montevideo, he had enlisted in 1934 and stayed in for nearly two years.

“Every month, $25 went home to put food on the table,” Ronning recalled. “But my dad was so proud — he would never use the money. But one day, he asked if he could borrow some of it, and I said, ‘No you can’t. You can’t borrow it because it’s your money.’ “

I remember watching Ronning’s eyes glitter as he stared back at that memory.

“That was something to say that day,” he continued after a pause. “The CCCs made me a man.”

Freelance writer David Hawley can be reached at dhawley[at]minnpost[dot]com.