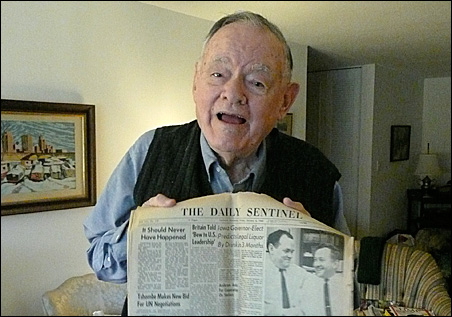 MinnPost photo by Jay Weiner
DFL political veteran Terry O’Toole, an observer at the Coleman-Franken trial, recalls the drama of the ’62-’63 statewide recount.

Terry O’Toole had to be there. He couldn’t help himself.

With a calm voice but exacting words, Hamilton asserted that Norm Coleman’s lawyers had failed to prove their case that Franken’s 225-vote recount lead should be overturned.

As Hamilton spoke, behind him and to his right, on the first row of oak benches in the Courtroom 300 gallery, O’Toole, 87, listened and watched with special, historic perspective.

O’Toole, cane in hand, had been coming to court for more than a week then. But March 13, the day of final arguments, was special.

O’Toole played role in ’62-’63 recount
He thought back 47 years ago, when he was an operative in Minnesota’s other great recount, the one for governor between incumbent Republican Elmer L. Andersen and Democratic challenger Karl Rolvaag.

O’Toole thought back, too, to the early 1990s, when he and former Ramsey County DFL Party boss Mike McLaughlin helped launch Coleman’s political career and campaign for mayor.

He is a lifelong, no-B.S.-ing, get-outta-my-way Democratic loyalist, a throwback to the days when the Irish controlled St. Paul and the DFL, when leaders of the Dems and the GOP would argue, hustle for votes and, then, place bets on who would win local elections.

“Five, six thousand dollars,” he said of the cash he’d count that had been wagered on Election Night results.

A retired criminal defense lawyer, O’Toole came to the Franken-Coleman trial to see how the big hitters from Washington, D.C., and Seattle, working for Franken, performed in court. He also wanted to see Joe Friedberg, Coleman’s lead litigator and a longtime acquaintance, in action.

For all of his days in court toward the end of the trial, O’Toole sat directly behind Coleman and his lawyers. During brief recesses, he’d razz Coleman a bit.

“Hey, Norm, how do you think it’s going?” O’Toole would ask.

The two would exchange banter.

“We used to be friends,” said O’Toole.

He helped launch Coleman’s political career
Yes, O’Toole helped Coleman get into politics. But O’Toole was there, too, in 1996, when Coleman called him and McLaughlin into his office and told them he was jumping parties, that he was becoming a Republican.

Even 13 years later, O’Toole opened his mouth in shock as he told the story.

“He was a wild, anti-Vietnam protester from the East and he’s going to become a Republican?” O’Toole said, reliving the moment of Coleman’s transformation. “I couldn’t believe it.”

And O’Toole and McLaughlin made it a point to be in attendance days later when Coleman formally and publicly announced his party switch.

“What are you two doing here?” Coleman asked them, as O’Toole recalls.

“McLaughlin and I both said — almost simultaneously — ‘We’re both Irish. We have an old habit. When a friend dies, we go to his wake.’ “

The reports of Coleman’s political death turned out to be exaggerated, though, when the mayor won re-election as a Republican the following year.

Still, all these years later, O’Toole’s was motivated to be in the courtroom a few weeks back for the days leading up to the closing arguments.

And Terry O’Toole laughed and took pride in the fact that Coleman retold the story of his and McLaughlin’s presence at his “wake” to his team of lawyers in the 2009 courtroom.

“That’s how well he remembered that,” O’Toole said.

O’Toole remembers well the events of Minnesota’s last great recount. He is one of the last living links to the Rolvaag side of the ’62-’63 saga.

That recount officially came to an end 46 years ago today, when  Democratic challenger Rolvaag was sworn in as governor, unseating Andersen. That was the recount that — until today — was the longest in Minnesota history.

Today’s recount process vastly different
The process of that recount was significantly different from the ongoing Senate recount and election contest. The law was different.

For one, the issue wasn’t absentee ballots but handwritten ballots. In those days, not every polling location had election machines.

For two, the recount wasn’t automatic, as the Franken-Coleman recount was. Rolvaag seemed to have won by 59 votes after Election Day. But weeks later, the State Canvassing Board ruled that Andersen won by 142 votes.

For three, when some ballots were miscounted in a precinct, the two sides would sometimes talk it over and come to an agreement.

“We used to be friends and politicians,” O’Toole said. “But the day of friendship between Democrats and Republicans was killed by that Speaker of the House from Georgia [Newt Gingrich]. He preached hate, hate the Democratic incumbent.”

But, of course, even way back then, there were challenged ballots that neither side would concede. One caused O’Toole, a recount observer for Rolvaag, to walk out of the recount in Fairmont, Minn., on Jan. 3, 1963, stirring headlines. 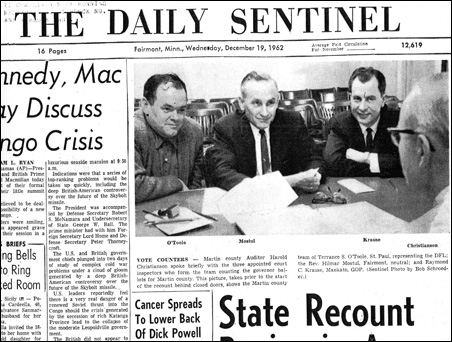 Ballot fight big news
One ballot in a Martin County precinct seemed to be marked for both Rolvaag and William Braatz, the Socialist Party candidate. O’Toole and Republican observer Norbert McCrady argued for a half hour over whose vote it should be.

The Daily Sentinel of Fairmont — an afternoon newspaper — chased down O’Toole for its final edition that day and wrote, “at presstime today [O’Toole] said he was taking a nap and didn’t know if he would be returning this afternoon to the Martin County courthouse to resume counting.”

Ah, the good old days, when politicians could take naps and admit to it.

In the end, Rolvaag won the recount by 91 votes after a trial before three judges who were selected by the campaigns, not the Minnesota Supreme Court. In the end, 3,800 disputed ballots were examined by the court.

Despite urgings from Republican Party leaders, Andersen chose not to appeal. Rolvaag won and was sworn in on March 25, 1963.

“Coleman, I just know he’s going to appeal and drag this out,” O’Toole said. “Andersen was a gentleman.”

When Hamilton completed his closing argument 12 days ago, O’Toole lifted himself out of his seat. Cane in hand, he marched over to the swinging door that separated the lawyers’ well from the public seating area.

“You did an excellent job, and I should know,” he told Hamilton. “I practiced law for 50 years. I’ve seen a lot of closing arguments, and that was one of the best.”

“I’m actually shocked that they’re taking this long to decide the case,” O’Toole said of this recount’s three judges.

But, then, Terry O’Toole is just a little bit biased. He’s a DFLer, always has been, always will be.

Just as he did in ’62-’63 statewide recount, Terry O’Toole viewed Coleman-Franken recount firsthand