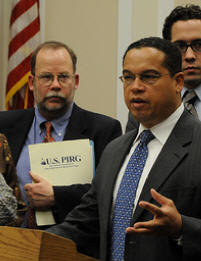 Yesterday morning I talked with Rep. Keith Ellison, who sits on the House Financial Service Committee, about a number of subjects concerning the economy: the prospects for re-regulating the financial system, the earmarks he recently secured for a series of local projects, the plight of renters caught up in housing foreclosures, and why he thinks our present circumstances already amount to a depression.

“I’m reading as much as I can,” says Ellison, “studying as much as I can, talking to economists I trust, like [Nobel laureate Joseph] Stiglitz, [James] Galbraith and a few others who I think are worth listening to. Even [Moody’s economist Mark] Zandi. I’m talking to these people and trying to form my own opinion, but it is complicated. I understand why the average citizen feels removed from it, and just basically acted upon as opposed to acting. But I feel confident that we’re moving forward.”

SP: Since Barack Obama took office, most of the attention has been on passing the stimulus bill and engineering the terms of the bank bailouts. When do we start talking publicly about what Congress is going to do to regulate the financial sector?

Keith Ellison: The conversation around regulation began in earnest back in September. The problem is that those conversations need to be more community-focused, more focused on what the people want to see. That’s a big concern of mine, and we have a set of meetings planned through my office. The reason is, we can have a regulatory “reform” that doesn’t really regulate anything. The same people who didn’t want any regulation still don’t. They haven’t learned their lessons. And unless there’s a public process that puts issues like consumer protection up front, systemic risk up front, equity, shared prosperity, and real accountability, then we’re not going to get it.

We can only get those things through a participatory process where average citizens demand them en masse. We can’t get them just by talking to the big boys about what concessions they’re going to give.

SP: In that connection, do you feel disappointed over the number of longtime Wall Street vets who are guiding the White House’s economic deliberations at this point?

Ellison: Yeah. I’m more than disappointed. I’m worried. My personality is such that I’m focused on now, and on moving forward. [Former Treasury Secretary Hank] Paulson and [Treasury Secretary Tim] Geithner played a role in this thing to a certain extent. Not that Geithner hasn’t done some good things, but he’s done some other things too.

The very folks who guided us into the problem, we’re relying on them to manage TARP money and to offer regulatory reform. Let me just tell you this, though–I’ve got a lot of confidence in [House Financial Services Committee chair] Barney Frank. I’ve got a lot of confidence in groups like the Center for Responsible Lending. I think a lot of civil rights organizations like LARASA and NAACP. Even labor unions are much more focused on financial reform than they have been in the past. I think it’s an organizing challenge to make sure it all works out right.

I think I have a responsibility to try to pull people together toward that end. So we’re doing some things locally and in DC to try to say, when do the people get their say in this regulatory reform thing? We got here as a result of people being disengaged, and we’re only going to get it fixed by people being re-engaged.

We’re seeing massive resistance to the cramdown proposal. That’s a proposal to allow bankruptcy judges to reschedule a mortgage on a primary residence. They’re fighting this thing tooth and nail. Now the fact is, the people fighting it are the last people who should get the ear of anyone. And it goes to show me they haven’t really learned any lessons. A lot of these folks–large banks, Wall Street firms–they have the attitude that “Heads I win, tails you lose.” No matter what happens, we always get ours.

That’s why we’ve got a challenge to get average people involved in this reform debate.

SP: What’s your view of the increasing calls from economists and even some noted market conservatives for nationalizing some of the biggest banks?

Ellison: I’m definitely open to the conversation. I think the question is, what does it get us and where do we take it? I’m not opposed to the debate, but I’ve got to be honest and say I haven’t really fleshed out every element of every option enough to say for myself, here’s what I think we must do.

I’m reading as much as I can, studying as much as I can, talking to economists I trust, like [Nobel laureate Joseph] Stiglitz, [James] Galbraith and a few others who I think are worth listening to. Even [Moody’s economist Mark] Zandi. I’m talking to these people and trying to form my own opinion, but it is complicated. I understand why the average citizen feels removed from it, and just basically acted upon as opposed to acting. But I feel confident that we’re moving forward.

SP: Your office has publicized a number of local projects for which the House has voted to pony up federal money. This has led to familiar complaints about government spending and pork. At a time when the feds are trying desperately to inject spending into the economy, does that criticism miss the forest for the trees?

Ellison: That criticism was never valid. The fact is, we don’t have a singularly capitalist free market economy. Nor do we have a socialist economy. We have a mixed economy that includes both private sector action and public sector action. It’s perfectly legitimate.

I’m proud of the projects I helped to get. Here’s the whole thing. This earmark thing is the stupidest debate in the world, and I hope you quote me on that. All earmarks are is congressionally designated spending based on needs that communities have told me they have. If I didn’t have the opportunity to use earmarks, there still would be spending, but it would all be from the White House. And whether it’s George Bush or Barack Obama, I know my district better than either one of them. And I know what people want in this district–the kind of development they seek in this district.

So I feel real strong about the idea that directing these kinds of projects to local needs is a good thing. We’ve had people submit applications, we’ve vetted them. I have sworn on penalty of perjury that I have absolutely, positively no personal interest in any of these projects. They’re good projects.

Now here’s the other thing, which speaks to your question as well. We have essentially zeroed out interest rates. The federal funds rate issued by the Fed has gotten as low as it can go. There is no more opportunity through monetary policy to try to stimulate the economy. All we have as an instrument to try to pull us out of this depression is fiscal policy. So we’ve got to spend some money. It’s plain and simple.

All you have to do is study the [1930s] depression to know that the way to prolong and continue a depression is not to spend any money–to start pulling back. The government needs to spend in a recession, particularly when it’s used every monetary option that it has.

Psychology and economics are tightly tied together. If people are afraid and don’t feel like they know where their next meal is coming from, or whether they’re still going to have a job, they stop spending. If one person stops spending, somebody else’s sales go down. When that somebody’s sales go down, somebody else gets laid off. And when that somebody gets laid off, they’re not spending anymore.

This fear and lack of confidence running through the economy is what reinforces the downward spiral in the economy. Our economy has literally shrunk, and we have the lowest consumer confidence numbers we’ve seen in a long time. So how do you get people feeling better about the economy and willing to make purchases? The way I think you do it is, you inject some money into the economy. Now I will say that I think our savings rates have been too low. We do need to promote savings among Americans, because it’s good for middle class people to have some money in the bank and not just live on credit cards.

At the end of the day, we’ve got to increase wages. Wages have been stagnant for 30 years, and yet productivity has gone up. That just means that the big corporations have been reaping the gains produced by workers being more productive, and they have not shared that.

So we’ve got a lot of reform that needs to happen, but you asked me about projects that I went and got money for. I’m proud to have done it, I’ll do it again, and I would get more if I could.

SP: Yesterday you introduced a bill to offer protections for renters who get caught up in their landlords’ foreclosure proceedings. That bill would give tenants three months’ notice before they can be evicted. I wanted to ask you to talk a little about the plight of renters whose homes get foreclosed out from under them. The prevalence of real estate speculation in the housing boom left a disproportionate number of renters in peril, didn’t it?

Ellison: Absolutely. When you talk about the foreclosure crisis, too many people think in terms of single-family dwellings. But the reality is that in Minneapolis, most of the foreclosures were not owner-occupied properties. There are a number of states, including Minnesota, where if you get foreclosed on, your rights if you’re not the property owner essentially get extinguished.

The least we can do is to say that people can stay 90 days in order to make other arrangements. And let me just say this: It’s good for neighborhoods. Because once people have to get out, you have an empty house where the grass not getting cut is the least of the problems. When the copper gets stripped out, or a gas line gets nicked or broken, you can have fires. And the empty houses attract nuisances. People go in there and get high. You get kids pulled into those places and raped or abused.

I grew up in the city of Detroit, and I’ve seen neighborhoods where renters get thrown out when the landlord is out. I’ve seen abandoned houses and apartment buildings proliferate. They become targets for arsonists. It’s a recipe for destroying neighborhoods.

I feel strongly about it, and I’m trying to get as much public support as I can.

SP: A few minutes ago, you referred to what we’re experiencing now as a depression. There’s actually no formal government definition of the difference between a recession and a depression. When did you decide that the circumstances had passed over from a recession to a depression?

I don’t want to cause panic or scare people to death. I just think it’s a good idea, when you start planning how to get out of a situation, to first know where you’re at. And I think we’re at that stage.