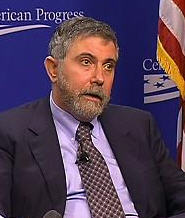 I don’t link to Paul Krugman as much as I might, because I assume that if you’re interested enough to read this blog, you’re already reading Krugman. But everyone ought to be sure to read his Friday column, which steps back from particulars for a moment and takes a big picture look at the oversized role that the financial sector has come to play in our economy and our politics.

The market mystique didn’t always rule financial policy. America emerged from the Great Depression with a tightly regulated banking system, which made finance a staid, even boring business. Banks attracted depositors by providing convenient branch locations and maybe a free toaster or two; they used the money thus attracted to make loans, and that was that.

And the financial system wasn’t just boring. It was also, by today’s standards, small. Even during the “go-go years,” the bull market of the 1960s, finance and insurance together accounted for less than 4 percent of G.D.P….

It all sounds primitive by today’s standards. Yet that boring, primitive financial system serviced an economy that doubled living standards over the course of a generation.

After 1980, of course, a very different financial system emerged. In the deregulation-minded Reagan era, old-fashioned banking was increasingly replaced by wheeling and dealing on a grand scale. The new system was much bigger than the old regime: On the eve of the current crisis, finance and insurance accounted for 8 percent of G.D.P., more than twice their share in the 1960s. By early last year, the Dow contained five financial companies — giants like A.I.G., Citigroup and Bank of America….

But the wizards were frauds, whether they knew it or not, and their magic turned out to be no more than a collection of cheap stage tricks. Above all, the key promise of securitization — that it would make the financial system more robust by spreading risk more widely — turned out to be a lie. Banks used securitization to increase their risk, not reduce it, and in the process they made the economy more, not less, vulnerable to financial disruption.

Nobody else writes about economics as clearly or compellingly. Not even close. But you knew that, right?

Krugman: The financial sector is simply too big