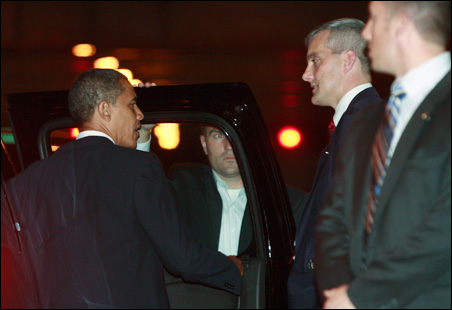 REUTERS/Jason Reed
Following hours of meetings with his staff in Chicago just two days after the election, President-elect Obama speaks with foreign policy adviser Denis McDonough, second from the right.

WASHINGTON, D.C. — You probably haven’t heard of Denis McDonough, but it’s a good bet you will before long.

The 39-year-old Stillwater, Minn., native is poised to become one of the key players on President Obama’s national security and foreign policy team, just as he was when he starred on the St. John’s University football teams from 1989-91.

But he’s playing in a much tougher league now, as deputy assistant to the president in charge of strategic communications for the National Security Council (NSC) as the new administration confronts a host of critical issues around the globe, ranging from wars in Iraq and Afghanistan to nuclear threats from Iran and North Korea to economic and military competition with China and Russia.

McDonough, who was a hard-hitting strong safety for John Gagliardi’s Johnnies as they compiled a 28-4-1 record during his three years at Collegeville, comes to the White House after serving as a senior foreign policy adviser for Obama’s presidential campaign. He heads up a staff of about a dozen people in the office of the national security adviser, retired Marine Gen. James Jones.

As such, he will play a key role in defining the Obama administration’s national security and foreign policy agenda, just as he did during the campaign.

“My job is to make sure we have a very clear message about what we hope to accomplish for national security and the country, and to tell the American people about it,” McDonough told me as he prepared to move into his office in the West Wing of the White House in January.

McDonough’s influential role was evident, just two days before Obama took the oath of office as the nation’s 44th president, when the New York Times asked him how Obama can avoid being misled in dealing with Iran by the kind of faulty intelligence that led the Bush administration into the Iraq quagmire.

The paper, which described McDonough as “a longtime foreign policy aide who is often charged with finding answers to questions Mr. Obama raises,” quoted McDonough as saying that Obama “approaches the intelligence reports the same way he approaches a lot of the things he reads, whether it is the New York Times or a report from the ground.”

Early test
McDonough’s job of explaining Obama’s stand on sensitive issues was put to the test early on when Pentagon officials expressed concerns about Obama’s campaign promise to allow gay men and lesbians to serve openly in the military, an issue that plagued President Bill Clinton from day one.

McDonough told the New York Times on Jan. 31 that Obama will move slowly and deliberately before repealing the 16-year-old “don’t ask, don’t tell” policy instituted by Clinton. “I think we’ve seen what happens when you address important policy issues imprudently,” he said. “It’s not in our interest and it’s not the style of this president.”

McDonough’s standing among Washington’s new generation of power brokers was certified by the Times Sunday magazine on Jan. 18 when it published a “Who’s Who” series of photographs of 52 key people around Obama.

McDonough was number 24, just ahead of his new boss, Gen. Jones. With dark bags under his eyes and a pencil tucked behind his right ear, McDonough looked like he’d just done an all-nighter at Georgetown University, where he earned a master’s degree in 1996.

On the opposite page was the person he calls his “best buddy,” Mark Lippert, who brought McDonough on as a foreign policy adviser to the Obama campaign. Lippert, a Navy reservist who returned from Iraq last July after a year as a Navy Seal intelligence officer, is now the NSC chief of staff.

Not surprisingly, McDonough compares his worldwide responsibilities to playing in one of the Johnnies’ big games, saying he “can’t help but feel the pressure. Like any big game, if you don’t feel the pressure, you’re probably not ready to play to the best of your ability.”

It was the late president of St. John’s, Brother Dietrich Reinhart, who he says spurred his curiosity in the world beyond Minnesota and Stillwater, where he grew up with 10 brothers and sisters, while Thorpe Running, a professor of Spanish and a scholar on Argentine writer Jorge Luis Borges, sparked his interest in Latin America, where he traveled extensively after graduation and taught in Belize.

While American foreign policy has historically focused on Europe and Asia, McDonough says there are “certain to be a lot of challenges” in Latin America as well, especially Mexico, post-Castro Cuba and Venezuela. “There are a whole range of challenges, but the days when you get to choose them are long gone.”

Key issue
But he sees Obama’s most urgent foreign policy issue as winding down the war in Iraq on the faster timetable he promised during the campaign, while shifting the focus of the war effort to Afghanistan while dealing with Iran.

McDonough also credits two other St. John’s alums with getting him interested in foreign policy. One was Mike Zumwinkle, now an executive of Cargill, Inc., who was working at the State Department when McDonough came to Washington to study at Georgetown University in 1995. Zumwinkle took him under his wing, and also introduced him to his future wife, Kari, with whom he has three young children.

The other was the late Cleveland Cram, a top CIA official in London, Amsterdam and Canada, who wrote a still-secret history of U.S. counterintelligence.

And if McDonough needs help in navigating the byzantine byways of the Washington bureaucracy, he can always call on three of his former bosses, including former Senate Majority Leader Tom Daschle of South Dakota, who was slated to become secretary of Health and Human Services until he ran into tax problems. McDonough also worked for Rep. Lee Hamilton of Indiana when he chaired the House International Relations Committee, and Sen. Ken Salazar of Colorado, now the secretary of Interior.

In fact, McDonough accompanied Obama to an unannounced dinner meeting in January with Hamilton, who now heads the Woodrow Wilson International Center for Scholars, at which a group of scholars on the Middle East and South Asia briefed Obama.

Hamilton, who was an early supporter of Obama and co-chairman of the 9/11 Commission and Iraq Study Group, later told me that Obama offered him not one but two jobs in his administration, but wouldn’t say what they were. But it’s likely they were top foreign policy and national security positions, probably dealing with Iraq and Iran.

While McDonough may find himself wondering, in the months ahead, how he ended up in such a powerful position, he is confident that Obama, virtually a political unknown only four years ago, will live up to the high expectations surrounding his presidency.

“Knowing what I know about him, I wasn’t surprised that he got elected,” he told me. “I’m obviously elated and ecstatic because I think his election is a sign that the country is ready for change, and hopefully, we’ll deliver it.”