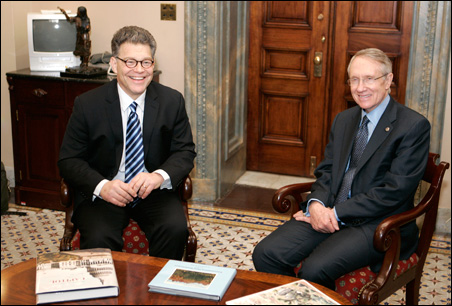 REUTERS/Mitch Dumke
Al Franken, a frequent visitor to the nation’s capital these days, is shown here during a January meeting with Majority Leader Sen. Harry Reid.

WASHINGTON, D.C. — Al Franken met with the Senate Democratic Caucus today and later said that “there is pretty much a light at the end of the tunnel” in his ongoing legal battle with former Republican Sen. Norm Coleman over the remaining vacant Senate seat in Minnesota.

Franken suggested, however, that he would probably not attempt to be seated before the fight has run its course, which potentially could mean weeks or months more of litigation if Coleman loses the current case and decides to appeal the decision to the state Supreme Court.

“The light at the end of the tunnel is that the case will wrap up and the court will make a decision,” said Franken, adding, “I believe that we are going to win the election contest and that after that [Coleman] can do what he wants. And if he does choose to appeal, it will be to the Minnesota state Supreme Court, and if they rule in our favor, then I imagine that I will be certified, and it won’t be very controversial that I will be seated. But, no, we are not attempting to be seated before that.”

In response to Franken’s words, Coleman’s team fired back, suggesting that Franken’s “light” was actually the approaching Coleman re-election train.

“Al Franken doesn’t know the difference between a light in the tunnel and the freight train that is coming right at him,” said Coleman’s campaign manager, Cullen Sheehan. “The freight train is coming, and it’s Senator Norm Coleman being re-elected to the United States Senate. And, if the contest court results are fair and legal, that freight train is going straight to D.C. with Senator Norm Coleman returning to continue his work for the people of Minnesota to get our economy back on track and creating jobs for the people of our state.”

Franken currently holds a 225-vote lead in the election recount, but Coleman is contesting those results.
Like Franken, Coleman has journeyed to the nation’s capital multiple times during the recount and legal case, but he spent today in Minnesota.

It was not immediately clear how long Franken will be here or what else he plans to do while in town.

“Senator Reid wanted to update the Democratic caucus on the latest news in the Minnesota recount, and to ensure Mr. Franken is plugged in to what is going on in the Senate so he can hit the ground running,” said Jim Manley, Reid’s senior communications adviser.

Manley added, “Al Franken was in town preparing for his transition to the U.S. Senate. It is only a matter of time.”

When asked if there would be an attempt to seat Franken if he wins the current court battle, Sen. Charles Schumer, D-N.Y., demurred.

“We are not even going to speculate on that,” Schumer told reporters. “The case is moving very well in our direction.”

“I believe that the Minnesota process is very clear,” said Klobuchar, adding, “So there was no talk about the Senate intervening.”