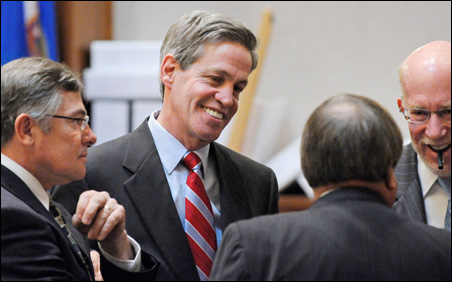 AP Photo/Jim Mone
Norm Coleman confers today with his team of lawyers during a break in court proceedings.

I am not a tech geek. Nor am I a venomous anti-Norm Coleman zealot.

Still, the recent dust-up, best reported by the Pioneer Press’ Dave Orrick, over Coleman’s website and how its database of supporters was compromised got me to thinking about what I knew and when I knew it.

This recent kerfuffle began way back on Jan. 28.

That’s just three days into this seven-week-long trial, for which there will be closing arguments today.

Coleman website saga
This website saga began so long ago that, as Coleman’s handsomely bald legal spokesman Ben Ginsberg said today, “I had a full head of hair.”

On that day, when the outcome of this trial was up in the air, Coleman’s campaign posted the names of voters whose absentee ballots were rejected. The campaign invited citizens to visit. The well-read Drudge Report reported the link.

The Coleman website soon crashed. The Coleman campaign put out a news release about said crash. I wrote about it here at MinnPost. And even cited the skepticism of some tech experts who claimed the Coleman side purposely crashed its site.

The idea that Coleman’s camp would purposely crash its site has never made sense to me.

Curiously, that very same night, I was poked by an instant message from a colleague. I saved it. It came at 10:52 p.m.

Here’s how it began:

“Hey! Just saw something on Twitter about the Norm Coleman web site,” my correspondent IM-ed.

My colleague then wrote: “Apparently, this person has discovered that the web site has mailing lists with contact info in a public folder, downloadable to anyone . . . The twitter:

‘Norm Coleman leaks a full database of supporters? Wow, just wow bad. Put that stuff in a non-web directory. Glad I’m not in the DB. [data base]’ Interestingly enough, this same person actually had posted a link to the public folder.”

My correspondent sent me the link that was posted for anyone to see.

That link, by the way, is now dead.

A chilling find
But that night, I clicked on it, and I got the chills.

There for everyone to see was an Excel spreadsheet of supporters or volunteers. I didn’t look at them all that long.

“Well, not hacking,” my guy replied.  “Because the files are in a public folder. But you do need to know how the website is configured to know that the folder exists.”

I replied: “Seems to me someone should tell the Coleman camp they’re vulnerable to attack, but I don’t think it should be a reporter like me.”

“Who then?” came the reply.

Well, I must admit, unjournalistic as it may have been, I sent an email to Mark Drake, then one of Coleman’s media relations team, and simply directed him to the Minnesota Independent story and, in the email topic wrote: “guessing you’ve seen this, but just in case . . .”

I have no receipt of a return email from Drake, but the next day, the Coleman site was on-again/off-again, and some Coleman staffers at the courthouse were sheepish about the situation.

Clearly, someone screwed up when posting the list of absentee ballot voters. Or when heavy traffic came in.

Coleman staffers insist to this day the Drudge link knocked out their server. Others say that can’t be true. I don’t really care.

I had forgotten the whole episode.

Until right now, and we flash-forward to the leak of the credit cards of supporters by Wikileaks. And to some solid, if sometimes partisan, reporting at the Minnesota Independent and others.

Hacker attack or campaign mistake?
At first, the Coleman campaign said they’d been attacked by hackers. But, it seems to me, they were attacked by political opponents who’d been holding back some files since way back in January, when Ginsberg had hair and their website was open for inspection to anyone with a laptop.

Today, the Coleman campaign posted a series of answers to frequently asked questions for supporters at the same web site.

In some ways, this web site deal is a sideshow. Coleman bashers, of course, are taking glee in the predicament. And Coleman supporters are heartsick by the big problem.

But it comes as the witness phase of the trial ended today, with both sides resting. On Friday, Kevin Hamilton will close the case for Franken and Joe Friedberg will sum up Coleman’s case. It comes as we’re closing in on who will win this trial and the now-open Senate seat.

Thinking back, I consider Wednesday to be a revealing day. There was real drama in the hallway outside Courtroom 300 that made an impression on some observers and may have hinted at Coleman’s own attitude.

Emotional Coleman addresses the media
In response to the news about the Wikileaks event, Coleman himself felt a need to make a statement. He didn’t take questions, but you didn’t need to ask how he felt.

He was emotional. He was pensive. He was angry.

He talked of the “theft” of data.

“This is chilling. This is frightening,” he said, so softly. “It is obviously an attack on this campaign, but beyond that … [this is] a very expensive legal proceeding. Online fundraising is a very critical element of that and clearly the theft of this information, the publication of this information seriously undermines that … I think it will have a very debilitating effect.”

He spoke so gingerly. He seethed beneath his sadness.

Was there concession in his voice? Was this the final straw in a recount trial that’s cost millions and that isn’t going very well?

We are, after all, now just one day from the very end of this election contest that he brought. Whether you’re a partisan or not, Coleman has not had a great seven weeks in that courtroom that he stood outside of Wednesday.

So, what does one person — who’s not a tech geek and not an anti-Norm zealot — think?

Someone in the Coleman campaign screwed up.

Someone with tech savvy in effect was walking down the street and found a briefcase lying on the sidewalk and kept it. (Others of us knew not to do such a thing.)

Lots of folks knew about it … even if the Coleman side says the Secret Service couldn’t confirm it.

Then, weeks later, at a key moment of this trial, as an expensive appeal seems like the only way that Coleman could hope to win this case, the culprit decided to toss this virtual Molotov cocktail into the mix.

Remember, too, if Coleman loses this case, he will be on the hook for Franken’s court costs — such things as the copying of documents, witness fees, etc. — in the hundreds of thousands of dollars. Legal fees? That’s uncertain, but, because of some of the three-judge panel’s rulings, Coleman would have to cover some portion of Franken’s millions of dollars of lawyers’ bills.

It could be argued that this was bound to happen in this campaign that has never ended, the most expensive and nastiest of the 2008 Senate election cycle.

But it made me think of a line in Jimmy Breslin’s tremendous political tour-de-force “How the Good Guys Finally Won,” about Watergate and former Rep. Tip O’Neill of Massachusetts.

Breslin wrote then, in another political context: “Why is it that the science of getting even always becomes desolate at the end?”

How must Coleman feel right now?

On Nov. 4, he led by more than 700 votes. By the end of the recount, he was behind by 225. And that Franken lead appears actually larger today than it was when the State Canvassing Board completed its counting on Jan. 3.

The bottom line is painful for Coleman.

Indeed, some folks who heard his statement Wednesday thought the emotion he revealed might be his first baby steps toward showing that he’s finally begun to internalize the fact that he just might not win this thing, that his lawyers haven’t proved that the 2008 election should be overturned.

Maybe not. This observation could be, as Ginsberg would say, “Balderdash.”

But Coleman knows this website brouhaha hurts fundraising because marginal supporters have been inconvenienced. Ever have to cancel your credit card?

More, an experienced political operative told me today, it shows a certain level of incompetence on the part of the campaign. Political supporters don’t like incompetence.

Neither do senators whose campaign, recount and seven-week-long contest may just be teetering on the brink of a bitter defeat.