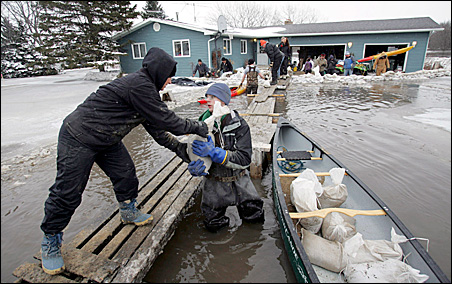 As residents of Fargo and other communities along the Red River have desperately stacked sandbags to fend off the rising waters, geologists, hydrologists and other scientists in the region know that their battle hasn’t been just against the river, but against an unfortunate reality defined by long-melted glaciers, an ancient lake and a river that flows north.

The latest flooding in the Red River Valley is, geologically speaking, inevitable.

The valley formed during Minnesota’s last glacial period, from about 14,000 years ago to 9,000 years ago, and is ranked by geologists as one of the flattest places on Earth. What is now rich farmland was for thousands of years the bottom of the vast Glacial Lake Agassiz, which at times stretched from what is now Alberta, Canada, to Browns Valley, Minn. The lake waxed and waned, depending on what the glaciers were doing, but finally broke through a natural dam about 9,000 years ago and drained in a torrent that created massive waterfalls, including a much more imposing version of what is now St. Anthony Falls.

A flood of geological problems
The geological difficulties in the region are legion. Talking with geologists, hydrologists and other scientists about the flooding reveals a list of “circumstances” that explain why the valley has seen remarkable flooding for at least a thousand years. The development of cities and farms over the past 100 years may have made the flooding a little worse because of the destruction of wetlands that absorb excess water and serve as a buffer, but the circumstances that are causing the current flood have been in place for nearly 9,000 years.

“The Red River Valley is the bottom of a lake that drained only a few thousand years ago,” said Harvey Thorliefson, the director of the Minnesota Geological Survey. Because the river is relatively young, it hasn’t cut a deep channel, he said.  Compounding the flooding problem is the fact that the river flows north into Canada, a legacy of the last ice age. 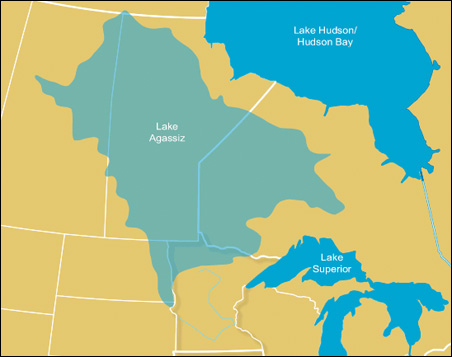 “As the thaw [from the south] progresses, more water flows north,” Thorliefson said. “So the local thaw is combined with water arriving from the south.” That flow of water can easily overwhelm the system, especially if the northern reaches of the river that haven’t thawed are clogged with ice.

Because the land is so flat, the flow in the river is slow. When it floods, there is relatively little current to carry the water away, so it just spreads out across the ancient lakebed. “It just runs everywhere, for miles and miles and miles,” Thorliefson said. It isn’t so much a flood as the creation of a new, temporary lake where the old one used to be.

“It is so flat that the system is very inefficient at getting the water out of the watershed, so the water just spreads out,” said Jim Stark, director of the U.S. Geological Survey’s Minnesota Water Science Center.

Flat land, frozen ground
And once it spreads out, inundating millions of acres of farmland, the water tends to stay there not just because the land is flat, but because the earth is frozen. The peculiarities of each winter play into the flooding — and this last winter helped set up the trouble. “The ground was wet and saturated from last fall,” Stark noted. The wet ground froze, was covered with frost, then snow, which was particularly heavy in North Dakota. When the snow began to melt, the ground was — and is — like concrete, said Jeffrey Marr, associate director of applied research at the University of Minnesota’s St. Anthony Falls Laboratory.

Marr said the “real priming of this pump came on March 10 with a large late-season snowstorm.” Snow depth in the Red River Valley ranged from 8 to 24 inches following the storm, which he described as “extreme for this time of year and [which] set up a perfect situation for broad flooding.” A week later, temperatures rose into the 50s in some parts of the basin. “The combination of a late-season snowstorm quickly followed by warm weather set up a catastrophic condition which led to major flooding,” he said.

To make matters worse, there is clay deposited during the Lake Agassiz period in the land across the entire region. The clay makes it hard for the ground to absorb water even when it isn’t frozen. 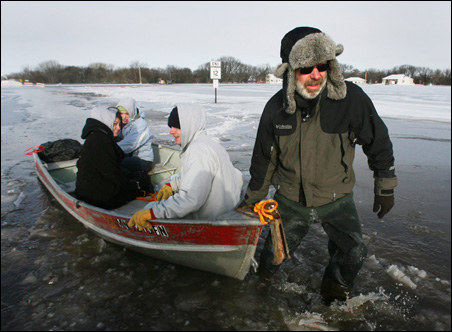 Still worse is the longer-cycle climate pattern in the Upper Midwest. “It has been very wet up here for many years,” said Stark. “Actually, since the Depression [in the 1930s].” Scientists aren’t sure why, because global climate patterns are notoriously complex and difficult to understand, but there is no indication that the region will get drier. Indeed, several of the researchers familiar with the history of Red River floods said it could get worse in years to come because of increasing precipitation in the northern region caused by global warming. That is uncertain and only speculation at this point.

Thorliefson said tree rings and core samples from the bottom of Canada’s Lake Winnipeg show that massive Red River flooding has happened about twice a century for the past 1,000 years. The 1997 flood was touted as a “500-year event,” even though there were several serious floods in the past century, with the flooding record in Fargo set in 1897.

Scientists revamping prediction models
The USGS and other scientists are moving away from 500- and 100-year designations for big floods and instead moving to a system that says, for example, that there will be a 1 percent chance of a major flood in Fargo each year. But regardless of the system used to predict floods, all of the scientists agree they are seeing more frequent events.

And there is yet one more geological problem that is playing out in the background of the flooding: Canada is literally rising.

“The weight of the glaciers depressed the surface of the Earth and since the glaciers receded, the land to the north has been rising,” Thorliefson said. The ice sheet that covered Canada was more than 2 miles thick and during the last event ran from Hudson Bay to north of the Dakotas. When it melted starting about 12,000 years ago, the land that had been under the ice quickly rose, or “rebounded,” almost 1,000 feet. In the intervening 10,000 years or so, it has risen another 1,000 feet and, according to Thorliefson, still has another 650 to 1,000 feet to go.

Why that matters is that the Red River flows downhill into Canada, and the bottom of the hill is rising. The river has already lost 50 percent of its gradient, Thorliefson said, and will lose more over the next few thousand years. Itwon’t be enough to make the river reverse direction and flow south, but it will slow the already-slow river even more, thus increasing the danger from floods. “It will become gradually more sluggish,” he said.

With unfortunate geology in a region with astounding amounts of melting snow, Marr said it all comes down to one basic fact: “There’s just too much water.”

This story is provided by the Inside Science News Service. Dawson is editor of the Washington D.C.-based news service, which is supported by the not-for-profit American Institute of Physics, a publisher of scientific journals. He was the science writer and editor at the Minneapolis-based Star Tribune for 13 years and a reporter there for 20 years. Contact him at jdawson@aip.org.

Too often, a losing battle: Geological forces are stacked against the Red River Valley