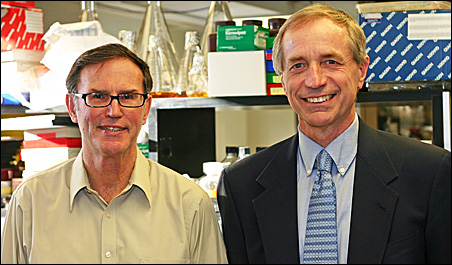 Courtesy of the U of M Academic Health Center
Ashley Haase, left, and Pat Schlievert: Their research offers hope for developing an inexpensive gel that could prevent vaginal transmission of HIV infections.

The Minneapolis-based researchers have identified a compound that, applied vaginally, can prevent transmission of a primate version of HIV, called SIV. Their findings are featured today in the online edition of the journal Nature.

My first thought upon reading the study was for the women I met last fall in Uganda who were suffering terribly and dying because of HIV/AIDS. They were mothers and grandmothers, many of whose families were reduced to living in desperate poverty because the women were too sick to work.

Women are far more likely than men to become infected with HIV through unprotected heterosexual intercourse. And in many countries, they have less power to negotiate condom use or to refuse to engage in sex.

The upshot is that women now represent nearly 60 percent of new HIV infections in sub-Saharan Africa.

Doctors from Minnesota and around the world are helping them to live longer and healthier lives. But finding effective vaccines and other prevention mechanisms has proved to be far more elusive than strategies for treating people after they are infected.

Now, the University of Minnesota research offers hope for developing an inexpensive gel that could prevent vaginal transmission of the disease.

But the Minnesota scientists are the first to caution that much work remains to be done before their method can be tested in humans, let alone delivered to women around the world.

Their studies focused on a naturally occurring compound glycerol monolaurate (GML), which the FDA has deemed safe for use in food and cosmetics to fight microbes and inflammation. Patrick Schlievert, a professor in the Department of Microbiology, had worked with GML for years to combat toxic shock syndrome, a dangerous bacterial infection.

For the HIV study, Schlievert collaborated with Dr. Ashley Haase, a prominent HIV researcher who also heads the Microbiology Department at the university’s medical school.

Counter-intuitive turns
As often is the case in scientific discovery, the research followed some counter-intuitive turns: The scientists learned that they could hold SIV back by halting the body’s natural defense system. After vaginal exposure to SIV, the system is activated and it rushes immune cells (T-cells) to the scene of the infection. Here’s the reason that natural defense mechanism, surprisingly, is a problem: The deadly virus effectively hijacks the T-cells, using them as fuel for expanding infection locally and spreading it throughout the body.

“So even though it sounds counter-intuitive, halting the body’s natural defense system might actually prevent transmission and rapid spread of the infection,” Haase said in a statement.

That’s where GML came in. It inhibits two molecules — cytokines and chemokines — that immune system cells use to trigger the body’s defense systems.

Since these were the processes they wanted to inhibit, it made sense to see if GML might prevent SIV transmission, Haase said.

First the research team conducted studies on nine primates to test the safety of vaginally-applied GML even though it had approved for other applications in humans. They found no problems applying it every day for months.

Then they applied GML to female rhesus monkeys and repeatedly exposed them vaginally to SIV. Any infected monkey would typically have hundreds of millions of copies of the dreaded virus circulating in its blood within two weeks.

In this study, that’s what happened in four out of five monkeys in a control group that had not been treated with GML. But the five GML-treated animals showed no evidence of infection even after receiving as many as four large doses of the virus.

‘Exceptionally inexpensive’
Part of the brilliance of the finding is that it required no lengthy searches for exotic new compounds that likely would be too expensive for women in most parts of the world where the HIV pandemic is most intense.

“GML is exceptionally inexpensive, is widely used in foods and cosmetics, and is easy to formulate in many ways for vaginal use,” Schlievert said. “The compound has been demonstrated in vitro to inhibit the growth of nearly all sexually transmitted disease microorganisms and other causes of vaginal infections, without affecting normal bacteria. Its use by women may significantly improve overall vaginal health.”

Before it can be deployed to save lives, though, scientists have a very long to-do list. They will need to repeat the initial studies again and again — testing, among other things, whether the results are lasting and don’t lead to unforeseen complications. They will need more animal studies and eventually human trials.

Finally would come the significant challenge of distributing supplies of the medication in cities and villages around the world and educating women to use it.