The delivery trucks were lined up two abreast, waiting in the dark for the clock to strike midnight. “Is it time yet?” one of the drivers called out. “No, not yet, still 10 minutes to go,” replied the local cop who was getting ready to direct traffic.

But then midnight came, and pandemonium broke out at the Gluek Brewery in Northeast Minneapolis. Hundreds of on-lookers started to scream and honk their horns. People jumped up and down on the tops of their cars, waving their arms.

After nearly 15 dry years, beer was back — at least the weaker variety was back. It was 12:01 a.m. on April 8, 1933, the exact minute when a federal law took effect legalizing the sale of beer — as long as its alcoholic content did not exceed 3.2 percent.

The 18th Amendment, which foisted Prohibition on a thirsty nation, had not yet been repealed. That would happen nine months later, in December. But with wet political winds buffeting elected officials all across the country, Washington had found a way to undercut Prohibition without waiting for the cumbersome constitutional amendment process to play out.

A neat loophole in Volstead Act
With strong support from the new Roosevelt administration, Congress had amended the Volstead Act, named for Minnesota Rep. Andrew Volstead, who had championed the cause of Prohibition. His bill implemented the 18th Amendment by establishing standards for determining whether or not a beverage was considered intoxicating. The 1933 legislation carved a neat loophole in the Volstead Act by specifying that beverages, including beer, containing 3.2 percent alcohol or less were not considered intoxicating.

According to press reports, the move to redefine the nature of intoxicating drinks had started around the dinner table at the White House, during Franklin Roosevelt’s first week in office, when he is reported to have told his guests: “I think it is time for beer.” 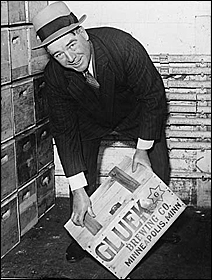 With support for repeal of the 18th Amendment gaining momentum, many but not all politicians in Minnesota had agreed with the country’s new president. One holdout was Minneapolis Mayor William Anderson, who was still resolutely dry. On April 3, Anderson vetoed a City Council ordinance that legalized the sale of beer in Minneapolis. In his veto message, Anderson said he was convinced that the ordinance violated the 18th Amendment, and that the council had no authority to incorporate the ordinance into the local municipal code. But the council quickly overrode the mayor’s veto, clearing the way for the sale of beer to begin in Minneapolis later in the week.

The mayor’s wife, an active member of the Women’s Christian Temperance Union, defended her husband’s action. “They say his failure to approve the ordinance may cost him the election,” she told the Minneapolis Tribune. “But I would rather have him defeated and know that he did the thing his conscience prompted.”

Mayor is soundly defeated
Mrs. Anderson’s prediction would later come true. In June, her husband would be soundly defeated when he attempted to seek a second two-year term as mayor. Most political observers attributed his defeat in large part to his veto of the beer ordinance.

At 12:01 on April 8, the trucks lining up at the Gluek’s Brewery were quickly loaded up with kegs of the long-awaited brew, and began their delivery rounds. Many were headed to the downtown Minneapolis hotels that had planned special post-midnight celebrations to mark the legalization of beer. But the drivers had to race to make their deliveries. The bars and hotels could only the serve the newly legal beverage until 1 a.m., so that didn’t leave much time for their guests to party and drink.

Within weeks of the arrival of beer, the Minneapolis Welfare Board was reporting a sharp drop in requests for public relief. More than 1,000 job-hungry Twin Citians had found work at the local breweries and at local bars and restaurants, where the tables were filled with thirsty patrons who no longer had to rely on bootleggers to meet their beverage needs.

Beer came back at just the right time, when it provided a much needed morale boost for Depression-weary Americans. Legalization, in and of itself, may not have sparked this country’s economic recovery, but it did make life a little more tolerable at a time when there was not a lot of other good news to celebrate.