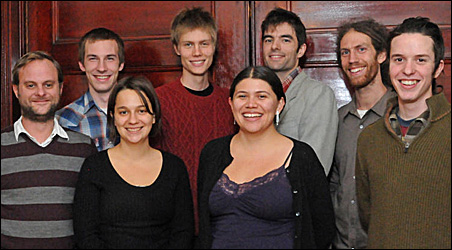 Six alleged terrorists met on a bright sunny morning in Minneapolis’ Powderhorn Park recently. I saw no one flee from them, take cover or even pay much notice.

These “terrorists” are among defendants known as the RNC Eight for their alleged plans to shut down the Republican National Convention in St. Paul last year. While their cases unfold in the courts, they live freely in our midst, working in preschools, a college cafeteria, a coffee shop and assorted odd jobs.

The RNC Eight are the first to face terrorism charges under the so-called Minnesota Patriot Act of 2002, anti-terrorism law enacted during the tense months following the 9/11 attacks on the United States.

But does this ragtag group of local anarchists truly represent the menace the Legislature had in mind?

Even the prosecution struggles for the answer.

“It’s not clear to us what the Legislature intended back in 2002,” said Ramsey County Attorney Susan Gaertner.

“The language [of the law] clearly covers these kinds of allegations,” Gaertner said. “Whether or not that is what the Legislature meant to do is much less clear. It’s not completely unusual for the Legislature to pass a law and then, when it plays out in real life situations, that there might be a question about what the reach of the law should be.”

So Minnesota must decide, while the nation watches, where to draw the line between terrorism and political protest that threatens to break laws.

“There is peaceful protest and criminal protest,” said Nathan Sales, a law professor at George Mason University in Virginia and an expert on the federal PATRIOT Act. “Even the criminal protests seem to be pretty far removed from our common-sense understanding of what terrorism is.”

Sales was speaking in general, not in defense of the RNC Eight. Ramsey County courts will decide whether terrorism charges fit their case. A trial is expected in September.

The case
In August 2007, the Ramsey County sheriff began investigating self-described anarchists who called themselves the RNC Welcoming Committee and plotted to disrupt the convention. An undercover deputy and other informants infiltrated the group. Then, on the weekend before the convention, deputies arrested the Eight and held them in jail while GOP delegates met and other protesters filled the streets.

Court documents allege that the group’s preparations ranged from practicing peaceful sit-ins to training for more violent tactics including throwing Molotov cocktails, overturning vehicles and rioting. Authorities also allege they organized other anarchists around the country for action in St. Paul.

Authorities allege that the mundane items were homemade ingredients for dangerous weapons such as Molotov cocktails and missiles that could be dropped from freeway overpasses.

The defense
Attorneys for the Eight say their first defense is that they didn’t do anything illegal.

“I don’t think the state can prove any of the critical elements of the case,” said Jordan Kushner, who represents Guillen-Givins.

Freedom of speech and dissent are other pieces of the defense strategy.

Whether or not the Eight talked about violent acts such as throwing Molotov cocktails, that’s not the same as actually doing it, said Bruce Nestor, who represents Bicking.

“We have not yet come to a point in this country where it’s illegal to talk about things,” Nestor said. “It’s not even illegal to advocate violence. It’s illegal to plan and carry out acts of violence but not to use overheated political rhetoric.”

It is a given that the defense will push hard against the terrorism charges, especially the charge of conspiracy to damage property.

“From the Boston Tea Party to the present, property sometimes gets damaged as a part of political demonstrations and police response,” Nestor said. “That can be dealt with by criminal law and by society and by democratic debate. But do we really want to start labeling that as terrorism?”

Russ Feingold, the Wisconsin Democrat, was the only member of the U.S. Senate to vote against the federal PATRIOT Act when it passed in October 2001. Feingold explained later why he stood so firm even given the slaughter on 9/11: “We must examine every item that is proposed in response to these events to be sure we are not rewarding these terrorists and weakening ourselves by giving up the cherished freedoms that they seek to destroy.”

I covered Feingold’s re-election bid in 2004, when his Republican opponent Tim Michels, hammered on that vote. One of Michels’ television ads featured smoke billowing out of the World Trade Center while an ominous voice said, “Our leaders passed new laws to keep us safe, but Russ Feingold voted against those laws.”

Even as early as 2004, standing up to the PATRIOT Act was becoming good politics, David Weigel wrote in “When Patriots Dissent,” published by Reason.

“The PATRIOT Act is . . . becoming the most galvanizing legislation for civil liberties activists since the Sedition Act of 1918,” Weigel wrote.

After post-9/11 shock faded, questions of whether the federal act went too far began to transcend typical left-right politics, he said, and “some of the act’s most influential opponents are very conservative people in very red states.”

Rather than follow Minnesota and pass their own Patriot Acts, two states — Alaska and Vermont — passed resolutions opposing the federal act, according to the National Conference of State Legislatures. Legislatures in Arizona, California, Hawaii, Michigan, New Hampshire and Washington considered similar resolutions.

It’s hard to say how many states joined Minnesota because the acts typically took on different names, said a researcher at the National Conference. What is certain is that a flurry of anti-terrorism and homeland security legislation passed in states during 2002 and 2003.

Written broadly
Given the fear gripping the nation at the time, it’s easy to understand why the Minnesota Legislature took a broad sweep against terrorism, said Ted Sampsell-Jones, who teaches criminal defense law at William Mitchell College of Law in St. Paul.

“Put yourself in the place of a legislator back then, and you say, ‘OK, something terrible has happened and we want to write a law to cover it.’But we don’t want to make it too narrow because you can’t anticipate every possible situation that will come up,” he said. “So you end up writing in broad terms. It may end up applying to things they didn’t anticipate.”

The chief author on the 2002 bill was Kevin Goodno, a Republican who represented Moorhead in the state House at the time and now works for the law firm Fredrikson & Byron. Goodno told me last week that he had little to do with the anti-terrorism provision which was attached to a larger bill he was sponsoring.

What Goodno did recall was that “there was no intent to stifle any local protestors from expressing their opinions.”

One of the bill’s original co-authors was Richard Stanek, now the Hennepin County sheriff. He said it is fitting to apply the law to small-scale local acts.

The FBI has classified militant groups such as the Earth Liberation Front as domestic terror organizations, and when they “commit acts that are meant to scare or injure others, they may very well fall under the domestic terrorism piece of the Minnesota statute,” Stanek said.

Sales, the PATRIOT Act expert, agreed that small-scale terrorism poses a serious security risk. While the United States has seen relatively large attacks, other countries have struggled against smaller threats perpetrated by locals who are inspired by radical ideology.

That’s a reason lawmakers choose language flexible enough so it “could be used on apocalyptic-scale terrorism as well as on terrorists with more modest ambitions,” he said.

The all-important challenge is to not go too far, especially when it comes to protest, Sales said.

Terrorism is classically defined as “severe violence involving threats to life or serious threats to bodily health for the purpose of coercing or intimidating a civilian population,” he said.

“Low-grade crimes — throwing a bottle through a window or a rock at a police officer — ought to be prosecuted, but they do not rise to the level of severe conduct that in our common sense usage we would describe as terrorist acts,” he said.

The prosecutor’s role
Of course, the Legislature could amend the state law. Meanwhile, a key check on applying it too broadly rests with prosecutors, said Sampsell-Jones at William Mitchell.

“The Legislature writes laws broadly and leaves it to the prosecutors to figure out which people are the really bad people and which aren’t,” he said. “The hope is that you have good sensible prosecutors in office who will recognize that not every single person who comes technically within the letter of the law should be charged with a terrorism statute.”

Gaertner said a prosecutor in her office determined that the case clearly fits the language of the law.

“But there’s no question that the terrorism charge has become a distraction to the core illegal conduct that is alleged,” she said.

Another distraction is Gaertner’s bid to become governor.

A trial next fall could give Gaertner much-needed name recognition at just the right time in the political cycle, said Larry Jacobs, a political scientist at the University of Minnesota’s Humphrey Institute.

“A prominent case like this could boost her name recognition across the state which is her first challenge because she is facing better known rivals for the party’s endorsement,” Jacobs said.

But the case also could set back Gaertner’s chances for the DFL endorsement because the Eight have sympathy among hard-core DFL activists.

“So it’s a mixed bag for her politically,” Jacobs said.

Gaertner laughed when I asked her to respond to the Eight’s claims that she has a political motive for pushing the case.

“I’d like to hear any theory by which this prosecution is helpful to me politically. It simply isn’t,” she said. “As far as the timing of the trial, we have sought to have this resolved as quickly as possible but we have not been able to get a trial date sooner than this fall.”

Standing their ground
Meanwhile, the Eight are not giving much ground on their right to dissent — at least peacefully.

Their gathering in Powderhorn Park on March 28 was for a bicycle ride which they called the “Tour de Fletcher” after Ramsey County Sheriff Bob Fletcher who led the crackdown on their group. Along with some 100 supporters, they pedaled to houses that Fletcher’s deputies had raided in Minneapolis and St. Paul.

Max Specktor, the 19-year-old, said he had recently returned from the West Coast where he spoke on college campuses in Washington and Oregon and also at the Bay Area Anarchist Book Fair in San Francisco. Their cause is attracting coast-to-coast attention.

I asked Specktor about damage other anarchists had done in St. Paul.

“They [police] kicked in our doors first and damaged property at our houses first,” he said. “No cops were injured, but hundreds of protesters were Maced and beaten.”

Luce Guillen-Givins, 24, is back at her old job earning $10 an hour at a cafeteria at Macalester College in St. Paul. But she’s not giving up protesting.

“I’m a person who is committed to radical change in this country and around the world,” she said. “I am not willing to slow down and moderate myself because the state would like me to do so.”