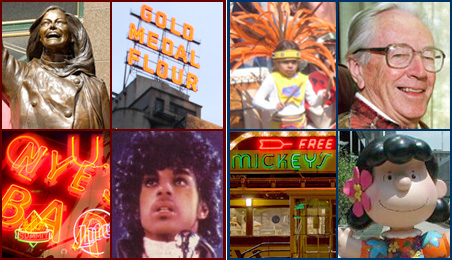 “Minneapolis is where they keep all the shady people and strip bars,” Dan Bruzzone said, with a hint of irony, over a beer at the Happy Gnome in St. Paul. “All the people are drunk and sad.”

Across the river, another Dan reflected on St. Paul while walking around Lake of the Isles. “St. Paul is like an oasis for me, because I never go there,” said Dan Elias of Minneapolis. “I think old folk musicians would like St. Paul.”

Minneapolis and St. Paul are known as twins, but some would swear they’re different as night and day. A hint of rivalry floats between them, whether it manifests itself in the 612 vs. 651 sumo wrestlers at St. Paul Saints games or in that friend who refuses to drive in Minneapolis because of the terrifying traffic.

Something that also cropped up with the Republican National Convention in September: Minneapolis was often erroneously credited with being the host city in national media, and even by Gov. Tim Pawlenty. As a final insult to injury, Minneapolis got all the parties, St. Paul got all the anarchists.

But some argue that rivalry is not the right term — that the siblings complement and play off of one another rather than battle. Even if there’s a hint of truth to the resident of one town dissing the other, most of the jawing has remained good natured all these years.

In fact, some folks think it’s high time to shelve all the bickering and come together as one—as much as that might lead some residents to groan.

Last year the MSP-More to Life campaign — an initiative led by a group of civic and business leaders — threw out the idea of rivalry altogether. According to the campaign, the area is Minneapolis St. Paul — no hyphens, no abbreviations, no twins. What does this mean for this vaunted, sometimes silly rivalry? Is it over? Did it ever really start? 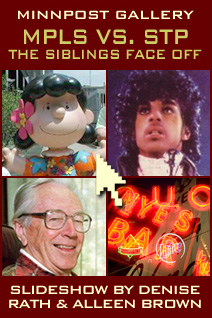 According to Karen Gruenberg, the project leader, the campaign’s main goal is to attract outside talent to the cities. It started out as a research project to determine why the cities have trouble attracting conventions and meetings.

“What we learned is both cities together are much stronger than one city on its own and that we needed to work together,” she said. “We realized that people outside the five-state area don’t differentiate what’s in Minneapolis from what’s in St. Paul — and they don’t care.”

But what about the residents?
That’s great for people outside the five-state area, but few residents are confused about the fact that St. Paul and Minneapolis are two separate cities.

“Some unique St. Paul experiences are looked upon by Minneapolis people as — they don’t get the draw. This lady at my work will use her vacation time to look for a medallion for a week straight,” said Elias. “All she ever talks about is how horrible Minneapolis is.”

“St. Paul is thought of as kind of boring,” Russell Cattelan of Roseville said at St. Paul’s Muddy Pig. “When I want to do something fun I go to Minneapolis.”

Some people, like Bruzzone, see St. Paul’s more laid back atmosphere as an asset. He listed the city’s compact, historic, neighborhood feel as a reason to live there. “I can get everything a big city has to offer, but I don’t have to live in one,” he said. “I enjoy having the opportunities for working but not having bullets in my windows.”

Bruzzone originally moved to Minneapolis from Woodbury to go to the University of Minnesota but moved to St. Paul to be closer to a job at 3M. “At first it was just convenient, but now I wouldn’t move away. It’s like quality over quantity.”

A historic rivalry
Rivalry between the two cities is no new phenomenon. In her book, “Claiming the City: Politics, Faith and the Power of Place in St. Paul,” Mary Wingerd chronicles St. Paul’s development of civic identity.

“By the turn of the century, St. Paul identifies itself as not Minneapolis,” she said. “The cities were only divided by a river, but they were very different and self-consciously so. They were constantly defining their identity in opposition to each other.”

According to Wingerd’s book, a lot of this had to do with economics. After an economic crisis in 1857, everyone lost everything. The effects of that crisis were more serious in St. Paul. The city had to rebuild with a shortage of capital, creating an opportunity for diverse groups to participate but slowing the city’s growth.

Minneapolis was younger and didn’t have as far to fall. Its small, elite class of Protestant New Englanders was able to maintain its influence over the city, while Minneapolis continued to expand at a faster rate than St. Paul. Minneapolis was also left with no reason to hand over power to any minority or immigrant group, which helped lead the city to be dubbed the U.S. capital of anti-Semitism in 1946.

In any case, by 1890, it was becoming clear that Minneapolis would soon overtake St. Paul in size and economic status. Both sides were eager to assert their superiority over the other, and the 1890 census seemed like the perfect opportunity to do so. Neither was willing to leave things to chance. Census-takers from both sides were arrested and accused of padding their numbers. Falsities ranged from single-family dwellings with 60 to 100 residents to fictional citizens living in the Union Depot.

Minneapolis increasingly looked outwards as the products of its mills were shipped all over the United States, while St. Paul became more and more insular, depending on local markets and strong local networks.

“My mother would never go to Minneapolis to shop,” Wingerd said. “She thought that that was just terrible.”

Rivalry today
That level of city loyalty is not as easy to find today. In fact, many of the residents interviewed didn’t even feel strongly enough to say there is a rivalry.

“I think it’s childish,” William Gonzalez of Minneapolis said. “I have no problem with nobody in St. Paul.”

“In the 12 years I’ve been at Meet Minneapolis, there’s been a tremendous change,” Gruenberg said. “We really operated separately. There was no joint marketing efforts. And now the various groups want to use the co-branded theme.”

Visitor and tourism organizations aren’t the only ones who have crossed city borders to work with their counterparts on the other side of the river. United Way, the Red Cross and the Boys Club are just a few organizations that once had separate Minneapolis and St. Paul divisions and now work as one.

“From the 1970s on there was economic growth and many more people coming in. That dilutes the insularity,” Wingerd said. “We live in a much more homogenous culture. So many things are the same no matter where you live. People do not have the sense of unique attachment more typical in the past.”

Of course, no one would say that the rivalry has completely faded. The Republican National Convention made that apparent when some stations mistook St. Paul for Minneapolis, and much of the business promised to St. Paul went to Minneapolis.

Minneapolis saw an increase of $453,448 in sales tax revenue between 2007 and 2008 for the months of August and September, while St. Paul revenues only increased $56,010. The Minnesota Department of Revenue said those numbers can’t be entirely attributed to the RNC, but they give a general idea of how the cities fared during the stampede of elephants and anarchists.

“People were really mad, saying — ‘Minneapolis gets everything!'” Wingerd said. “But that was an unusual moment.”

Minneapolis vs. St. Paul: End of a great sibling rivalry?