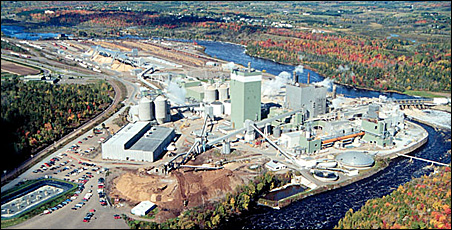 sappi.com
Sappi’s paper mill in Cloquet. The company “awaits clarification from Congress” on the tax credit, says a Sappi spokesperson.

WASHINGTON, D.C. — Paper companies in Minnesota and across the nation have figured out how to make billions off of an alternative energy tax credit that Congress devised two years ago. Their answer: burn diesel.

This rather paradoxical twist has already ignited a debate between the paper industry and environmental groups and lawmakers on both sides of the argument in what some industry watchers and analysts are claiming is a presage of fights to come as Congress tries to detail new climate and energy legislation this session.

“It is just so perverse, the way this law is being applied,” said Kevin Mason, managing director of paper and forest products for Equity Research Associates in British Columbia. “And, yet, if the government is willing to be silly enough to hand out the money, these companies have a fiduciary responsibility to their shareholders to get it.”

The tax credit in question originated from a 2005 highway law and was intended as an incentive to mix alternative energy sources, such as ethanol, with fossil fuels. In 2007, the credit was expanded to include non-transportation fuels.

Some papermakers who generate electricity by burning a wood byproduct called “black liquor” saw an opportunity to capitalize. But to qualify for the credit, which only applies to mixed fuels, paper companies have had to start adding in small amounts of diesel, Mason said.

By doing this, Mason estimates that the windfall for 30 paper-producing companies in the United States may reach about $6.6 billion and could rise as high was $10 billion.

About 100 U.S. mills are eligible to take advantage of the tax credit. Some paper companies could even raise more money this year through the tax credit than they do in revenue, according to Mason.

“This is a government program that has run amok,” said Verle Sutton, who operates the Reel Time Report, owned by California-based Forestweb Inc., and has analyzed data for the paper industry for the past 10 years.

Industry defends credit
But those in the industry, which has plummeted recently amid a bad economy and a decreased demand for paper products as readers and advertisers increasingly turn online, defend the tax credit as a much-needed and appropriate recognition of their renewable energy process.

“Our industry has been one of the leaders in the production of renewable energy for many years,” said Wayne Brandt, the executive vice president of Minnesota Forest Industries and the Minnesota Timber Producers Association. “If the federal government is going to be incentivizing the production of renewable energy, we think we should be incentivized too.”

The paper industry has been running off of “black liquor” for decades. Wood is cooked in large vats, in what is called the Kraft process, to make pulp. The byproduct is a viscous dark liquid that paper mills then use to generate about two-thirds of their own electricity, according to Brandt.

“We are in the investigative stage at this point,” said Virginia Aulin, Boise’s vice president of corporate affairs. “Other companies are further along, [but] we are looking at it [the tax credit] with a lot of interest.”

International Paper Co. and Verso Paper Corp, both based in Tennessee, have already taken advantage of the credit.

Olson added, “Consistent with our fiduciary responsibility to our shareholders, Sappi Fine Paper North America is taking the necessary steps to preserve its options.”

Earlier this week, 26 environmental groups wrote to Senate leaders on the Finance Committee asking them to “take swift action to close this loophole.”

“If we are going to bailout the paper industry with a tax loophole, then let’s have a green loophole instead,” said Eric Palola, senior director of forests for the National Wildlife Federation. “This is going in the wrong direction. To subsidize additional fossil fuel usage, that is the wrong choice for our energy future.”

Much like the auto industry, Palola said, “the subsidy really belies larger changes that need to be made to the paper industry overall.”

Case of ‘unintended consequences’
Senate Finance Committee Chairman Sen. Max Baucus, D-Mont., has indicated that the issue would be addressed.

According to a Baucus aide, “The chairman is looking at the issue and his objective is to make sure that the credit is used in a manner that is consistent with the intent of the law.”

“I don’t think that anybody envisioned that they [the paper mills] would get this credit,” Peterson said Thursday. “I think it needs to be revised, and I think that it will be.”

At the same time, the United Steelworkers Union, which represents paper mill workers, sent its own letter to Congress, arguing that revoking the tax credit now could have a devastating effect on the industry.

“It is not an overstatement to say that this credit, in a number of cases, is the most compelling factor in decisions related to the continuing operation of a number of pulp and paper mills that support some of the best manufacturing jobs left in America,” wrote Leo W. Gerard, president of the United Steelworkers Union. “The alternative fuel mixture tax credit… is providing badly needed relief to paper makers at one of the most critical junctures in the industry’s history.”

‘Promotes energy independence’
In comments Thursday, Sen. Amy Klobuchar, D-Minn., focused on the positive portions of the provision while leaving the door open for potential alterations to the law down the road.

“This measure promotes energy independence and provides tax relief for Minnesota companies in this difficult economic time,” Klobuchar said. “I don’t believe we should change the law now; the time for that will be when Congress reviews energy tax credits.”

The alternative fuels credit is set to expire at the end of this year.

John Schadl, spokesman for Rep. Jim Oberstar, D-Minn., said that the discussion surrounding the black liquor tax credit had created a false impression that the tax provision was allowing huge amounts of fossil fuel to be burned.

To qualify for the credit, “black liquor” producers must create a mixture that contains at least .1 percent of diesel, said Mason. Some companies already use some diesel and natural gas in the processes.

“I think the production of biomass is an important part of energy dependence and good tax policy,” said Schadl. “You are not going to see us apologizing for the fact that there aren’t layoffs in Cloquet. That is a good use of the tax credit, to keep people in their jobs.”

In Minnesota, the pulp paper industry employs 3,322 people, according to Minnesota Forest Industries.

Schadl said that Oberstar would also support “tweaking” the provision “so they could be eligible without adding the diesel.”

The credit, however, has also raised concerns from Canadian paper producers, who argue that it amounts to a subsidy that gives U.S. producers an unfair advantage, according to Brian McClay, a well known analyst in the pulp and paper industry who helps lead a paper-market data operation in Montreal.

“It is a huge development,” McClay said. “I think the first two words out of our mouths, those of us watching this internationally, was ‘me too.’ It wasn’t a question of whether they shouldn’t get it.”

But while this particular issue may be resolved in the near future, if not by the end of the year, some see it as a harbinger of things to come as Congress begins to reconfigure the old energy rules.

“This is just the very tip,” Sutton said.