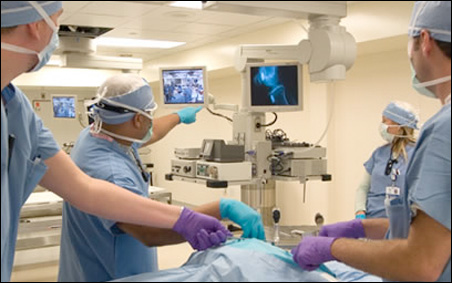 Park Nicollet Health Services’ cash reserves have fallen to the point that the health system has been forced by bondholders to bring in an independent consultant to review finances and “outline action steps to improve,” according to an April 16 email from President and CEO David Wessner to employees.

Since December, nearly 500 employees have lost their jobs and remaining employees are bracing for more bad news on May 12, when more “action steps” are anticipated, according to sources who requested anonymity for fear of losing their jobs at Park Nicollet.

The bad news could mean more layoffs and there are fears that clinics could be closed, including one in south Minneapolis that serves about 12 percent more Medicare and Medicaid patients than other clinics in the system, sources said. That clinic has been given six months to turn around its finances.

If the Minneapolis clinic were either to close or to cut back on the number of Medicare and Medicaid patients it takes to make it more profitable, one employee said, “patient care would be affected for a lot of people who can’t go elsewhere.”

Spokesman confirms clinic will not close
Park Nicollet spokesman Jeremiah Whitten said in an email this morning, “I can confirm for you that Park Nicollet is NOT closing our Minneapolis clinic.” On Wednesday, Whitten said executives would not be made available for interviews and he would not be able to comment further, referring MinnPost to a press release issued April 20, when 233 layoffs were announced.

In that release, Wessner said: “Park Nicollet, like many organizations, has been negatively impacted by the national economic downturn which affected investment holdings, along with lower demand for our services. We also are seeing the amount of uncompensated care we provide increase due to higher unemployment and a greater prevalence of high deductible health insurance. And, we still don’t know the full extent of state and federal budget cuts to health care. We are taking steps now to address our current realities and be better positioned for the future.”

The St. Louis Park-based Park Nicollet system’s “days cash on hand” is down from 130 days a year ago to 70 days, which is how long Park Nicollet would be able to meet its financial obligations if all revenue stopped, according to the April 16 email from Wessner to employees. Park Nicollet’s bond covenant requires that it have at least 60 days cash on hand, a measure creditors use to determine credit-worthiness and interest rates. Creditors also can demand immediate repayment if cash on hand falls below a certain threshold. Park Nicollet’s system, which includes clinics, specialty centers and Methodist Hospital, started the year with 112 days cash.

Given the losses in 2008, Wessner is anticipating that Park Nicollet’s current “A” bond rating will be lowered by Standard and Poor’s when it comes up for review.

The news in Wessner’s email is “disturbing, but there’s a fair amount of transparency on the part of the CEO — and that’s pretty good,” said health economist Steve Parente, an associate professor of finance in the University of Minnesota’s Carlson School of Management.

“The big picture would be that hospitals are not that immune from the larger macroeconomic situation, and just like a consumer, institutions that go and take out more debt to do more building, if the economy goes suddenly soft, they are potentially courting some substantial risk,” Parente said.

The cash and earnings crunch is not exclusive to Park Nicollet. According to an April 27 American Hospital Association report [PDF, page 14] titled “The Economic Crisis: The Toll on the Patients and Communities Hospitals Serve,” 27 percent of respondents said they had seen a significant decrease in days cash on hand, and 32 percent showed a moderate decrease.

A Minnesota Hospital Association (MHA) survey found that average cash on hand for members was 92 days in the fourth quarter 2008 compared with 117 in the same 2007 quarter, said Jan Hennings, communications director of the association. First-quarter 2009 figures won’t be available for a while.

‘Pretty dramatic’ collective MHA losses
MHA members collectively reported a loss of $343 million in their investment portfolios in the fourth quarter of 2008 compared with a gain of $18 million in the same quarter in 2007. “That’s pretty dramatic, and we’re not expecting it to look any better when we get the first quarter of 2009 because things are changing so rapidly,” she said.

Though Park Nicollet — like most hospitals and health plans in Minnesota — is a nonprofit 501[c]3 entity, its administrators and the independent consultant are clearly looking at its profit margins.

“We can not rely on the market to come back and improve our days cash; we must improve our operating profitability,” Wessner writes. “This will take higher profit margins than we have had in the past, and achieving these higher margins will necessitate us being far more critical of the financial performance of our programs, sites and services. We can no longer afford to subsidize areas or activities that consume cash. We also will need to take a harder look at all expenses.”

Years of aggressive expansion
The difficulties at Park Nicollet come after years of aggressive expansion in the health-care industry, a chunk of it financed by bonds. In recent years, for example, Park Nicollet has built the Melrose Institute for eating disorders, an orthopedic center called Tria that lost close to $10 million according to the system’s IRS 990 records, and the Frauenshuh Cancer Center on the Methodist Hospital campus.

In 2007 alone, Park Nicollet, which listed $1.06 billion in operating revenue, reported about $113.4 million in capital expenditures, nearly $92 million of it for buildings and space, according to data from the Minnesota Department of Health’s health economics program.

Though hospitals have been quite vocal about proposed state budget cuts to health care and the impact uncompensated care has on their budgets, state figures show [PDF, Page 28] that underpayment by state health programs came to 2.5 percent or $636.7 million of operating expenses of all hospitals in 2007.

As Park Nicollet works on shoring up its finances, employees fret about where the next cuts will come and the policy implications of having a financial consultant dictate changes.

“These are hard times — I can deal with that,” said one employee of Park Nicollet who requested anonymity for fear of being fired. “I just don’t want them to hurt patients and I don’t want them to make decisions based on conversations between management and a bank.”

Casey Selix, a news editor and writer for MinnPost, can be reached at cselix[at]minnpost[dot]com.

Correction:This story originally referred to Methodist Hospital as North Memorial. The story has been updated with the correct name.