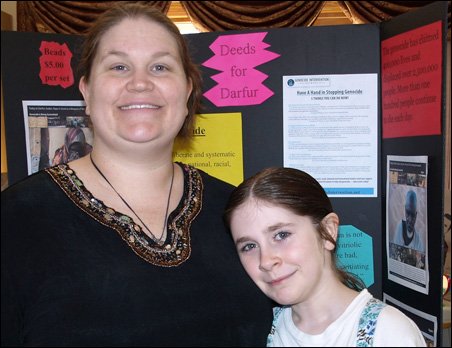 MinnPost photo by Sharon Schmickle
Marybeth, left, and Freya Slocumb in front of a display about Darfur.

Don’t tell Freya Slocumb that one person can’t do much to help the victims of violence in Darfur.

She’s only “8 and 11/12ths years old” and she’s raised $1,100 for the cause and also tweaked the consciences of people in churches and synagogues across the Twin Cities.

On Sunday, Freya will give her third speech on the subject at a state Capitol rally called “Day for Darfur: The Faces of Genocide.”

State and local groups have organized the rally as part of a national campaign that aims to remember those who have died in past genocides as well as to protect survivors in Darfur and prevent such tragedies in the future.

Among other activities, the groups will offer updates on local moves to divest from companies they consider to be complicit in supporting Sudanese President Omar al-Bashir. The International Criminal Court has issued an arrest warrant for him on charges of war crimes and crimes against humanity in connection with Darfur. He has denied the charges.

Freya is among thousands of young people in the Twin Cities who have become passionately engaged in efforts to help relieve the suffering of some 2.7 million people who have been displaced in the conflict over Sudan’s Darfur region.

Selling ‘sacrifice beads’
Sitting at the kitchen table of her family’s home in Burnsville this week, Freya explained that a speaker at a church in Minneapolis awoke her to the needs in Darfur. Her version of doing something for the cause has been to sell strings of “sacrifice beads” at church bazaars and other public gatherings. Proceeds go to the Minnesota Genocide Intervention Network.

Freya was just 2 years old when the conflict erupted after mostly ethnic African rebels took up arms against Sudan’s Arab-dominated government, claiming that non-Arabs were being oppressed. Virtually every version of what happened after that has been debated, but U.N. investigators concluded in 2005 that the response from the Sudanese government amounted to war crimes and crimes against humanity. The United States was one of several countries to call the response genocide, a label that remains controversial.

What isn’t debated is that the aftermath has been bloody. By U.N. estimates, 300,000 people have been killed. 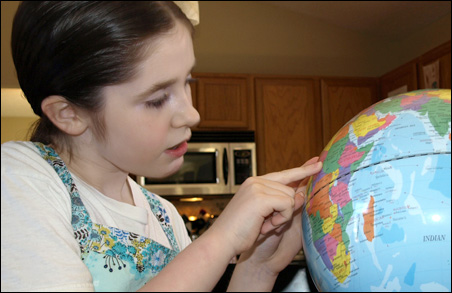 MinnPost photo by Sharon Schmickle
Freya Slocumb points to Sudan on a globe.

Relief groups had helped survivors, with backing from contributors like Freya in many countries. After the arrest warrant was issued for al-Bashir, though, more than a dozen international aid groups recently were expelled from the region and delicate negotiations for their return are underway.

Many aspects of the conflict have been too horrible for someone Freya’s age, so her mother, Marybeth Slocumb, often explains things “in G-rated terms.”

The context is relevant here. Most video games also are off limits for Freya and her two younger brothers. Marybeth expressed shock that anyone would allow kids anywhere near the game Grand Theft Auto.

“The glorification of violence is to me a lot worse than allowing kids to know there is evil in the world and giving them a chance to do something about it,” Marybeth said.

So some grisly information about Darfur gets through Marybeth’s strict screen. But not the award-winning documentary film “The Devil Came on Horseback.” It was deemed too violent.

Still, Freya has watched and read enough other material to have become a veritable encyclopedia of information about Darfur. She points instantly to its location on her globe.

Before practicing her speech for me, Freya declared that what really upsets her is complacency about need on the other side of the world.

“I care because I am a young girl and I believe young girls everywhere should be safe,” she began the speech.

The rally on Sunday, April 26, 1-3 p.m. at the state Capitol is free and open to the public. Other scheduled speakers include state Sen. Sandy Pappas and a young Bosnian refugee. More information is available here.