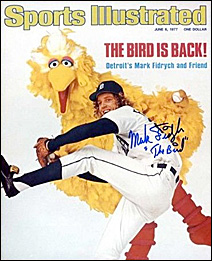 How many guys do you know that, upon the very mention of their name, you find yourself breaking into a smile? Mark “The Bird” Fidrych, who died Monday in an apparent accident on his farm near Boston, was one of those guys.

One instantly recalls Fidrych in that magical summer of 1976 pitching for a so-so Detroit team, going 19-9 on a team that won just 74 games. He was just 22 years old and looked it. He did unusual things, like manicuring the mound and talking to the baseball. When he pitched well and brought a roar from the crowd, he broke into an ear-to-ear smile that would have softened the soul of the hardest-boiled opponent.

But there was nothing odd about his pitching that summer. Mark Fidrych wasn’t blessed with a rocket-like fast ball. He didn’t throw a Bert Blyleven-like curve ball. Nor did he employ a trick pitch like a knuckle ball or a super-slow change-up.

No, Mark Fidrych simply pitched. He moved the ball in and he moved the ball out. For one summer, he took Willie Keeler’s axiom about hitting (“hit ’em where they ain’t”) and modified it to pitching. (“throw it where they can’t hit it”). He may have looked like Big Bird but, for that one magical summer, he threw like Walter “Big Train” Johnson.

Memory is a tricky tableau. However, a warm July night at old Metropolitan Stadium is seared in my mind’s eye. Fidrych was paired up against Bill Singer, an old pro of a pitcher who knew a thing or two about picking corners himself.

Calvin Griffith was always one for an odd promotion. As part of the pre-game ceremonies, several birds (actually homing pigeons that belonged to super scout Angie Giuliani) were released to the sky. Exactly what these birds were supposed to do is anybody’s guess. I suspect many in the large crowd of more than 30,000 simply took it as part of the drill when Fidrych pitched on the road.

The game began and one instantly saw why Fidrych was winning so many games. He painted corners. He gave up hits and there but, when push came to shove, he eventually got the big out he needed.

The Twins did rough him up early, jumping to a 3-0 lead. But Rusty Staub evened the game with a rocket-like three-run home run in the sixth. Before the inning was over, Detroit had a 4-3 lead.

Although they would tack on four more runs, that was all Fidrych really needed. The Twins got a lot of hits off him that night but Fidrych coaxed three double-play ground balls to end threats.

When it was over, he had thrown a rarity of a complete game – a 10-hitter with just two walks and two strikeouts. As Jim Kaat had done so many times on the same mound to opponents, he had confounded the Twins when he really needed an out – the mark of a fellow who knew his stuff.

Fidrych and Oliva
Although he bounced around on the mound doing all the mannerisms he was famous for, one moment stands out 23 years later. Detroit had an 8-3 lead in the bottom of the ninth with one out and nobody on when Tony Oliva stepped to the plate. His knees were shot but Oliva, who already had three singles and a RBI, still had the good eye at the plate. Fidrych tried to sneak a pitch inside but Oliva roped it into right field for his fourth hit. It was the 28th (and, as it turned out, final) in Oliva’s short career that he had four hits or more in a game.

Fidrych knew nothing of history but he knew talent when he saw it. It was his tradition to ask for a new ball after every hit allowed. He did so in this case and then stepped off the mound to tip his cap to Oliva.

Later, a wire service reporter wanted to know why he tipped his cap to Oliva.

“The guy who got the four hits and was on first base in the ninth inning,” was the reply.

“Oh, that guy. I don’t know his name but he is a really good hitter. I just wanted him to know that,” Fidrych replied.

There may never be another guy like Fidrych. And, in a way, that would be a shame. But those of us who spent any time watching him that summer will always remember him with a smile.

Dave Wright, a Detroit native, is a freelance writer in St. Paul. He covered that game as a stringer for United Press International.