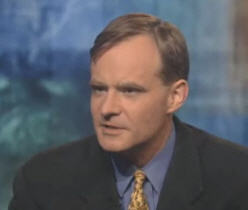 While the government’s policy of robbing the public to prop up an insolvent financial system continues to be defended daily by the usual Washington claque of true believers and the bought and paid for, an increasingly forceful critique of official folly has grown up around them. What these critics share in common, as I’ve written before, is the conviction that the path to recovery involves making the people and institutions who caused the problem take the main hits for setting the system right again–whether that solution is called nationalization or bankruptcy reorganization.

Paul Krugman, fresh off his appearance on the cover of the April 6 Newsweek, has been anointed its principal face in media, but he’s got plenty of impressively pedigreed company in the likes of Nouriel Roubini and fellow Nobel economics laureate Joseph Stiglitz. In the past week or so, another couple of voices have weighed in with implicit or explicit condemnations of the Obama administration and its financial policy architects, Larry Summers and Tim Geithner.

To deal with a troubled financial system, three fundamentally different policy alternatives are possible: liquidation, receivership, or subsidization. To place these alternatives in context, the report evaluates historical and contemporary efforts to confront financial crises and their relative success. The Panel focused on six historical experiences: (1) the U.S. Depression of the 1930s; (2) the bank run on and subsequent government seizure of Continental Illinois in 1984; (3) the savings and loan crisis of the late 1980s and establishment of the Resolution Trust Corporation; (4) the recapitalization of the FDIC bank insurance fund in 1991; (5) Sweden’s financial crisis of the early 1990s; and (6) what has become known as Japan’s ‘Lost Decade’ of the 1990s. The report also surveys the approaches currently employed by Iceland, Ireland, the United Kingdom, and other European countries….

Liquidation avoids the uncertainty and open-ended commitment that accompany subsidization. It can restore market confidence in the surviving banks, and it can potentially accelerate recovery by offering decisive and clear statements about the government’s evaluation of financial conditions and institutions.

Simon Johnson, who served as chief economist at the International Monetary Fund in 2007-08, has been a critic of the Bush/Obama bailout from the start, but his devastating essay in the May issue of the Atlantic, “The Quiet Coup,” may be the clearest short-form explanation yet produced of the problem and of the official paralysis that has greeted it.

Johnson–who is also a co-author of the indispensable Baseline Scenario blog–gets the story right: the progressive enmeshing of Wall Street and Washington culture; the rise of the math-savant “quants” and their exotic financial products, understood by no one; and the veto power that financial giants hold over U.S. economic policy. In Johnson’s telling, it all resembles the problem of reining in the plutocrats in corruption-rich emerging economies:

Squeezing the oligarchs… is seldom the strategy of choice among emerging-market governments. Quite the contrary: at the outset of the crisis, the oligarchs are usually among the first to get extra help from the government, such as preferential access to foreign currency, or maybe a nice tax break, or—here’s a classic Kremlin bailout technique—the assumption of private debt obligations by the government. Under duress, generosity toward old friends takes many innovative forms. Meanwhile, needing to squeeze someone, most emerging-market governments look first to ordinary working folk—at least until the riots grow too large.

Eventually, as the oligarchs in Putin’s Russia now realize, some within the elite have to lose out before recovery can begin. It’s a game of musical chairs: there just aren’t enough currency reserves to take care of everyone, and the government cannot afford to take over private-sector debt completely.

So the IMF staff looks into the eyes of the minister of finance and decides whether the government is serious yet. The fund will give even a country like Russia a loan eventually, but first it wants to make sure Prime Minister Putin is ready, willing, and able to be tough on some of his friends. If he is not ready to throw former pals to the wolves, the fund can wait. And when he is ready, the fund is happy to make helpful suggestions—particularly with regard to wresting control of the banking system from the hands of the most incompetent and avaricious “entrepreneurs.”

Recognize anyone you know?