For as long as we have carted our briefcases, scheduled power lunches, caught the company car pool, and gathered around the office water cooler, coffee has been a part of America’s work force.

Even during an economic downturn.

By now, you’ve already read about Starbucks closing hundreds of stores and then attempting to reinvent itself with meal deals and instant coffee in an effort to win back those of us who’ve cut back.

If coffee is still part of your morning routine, then you’ve probably noticed that quiet corner table at your neighborhood coffee shop has been taken over  by the-not-so-gainfully-employed who have little choice but to carrying on with their laptops and Blackberries as if Caribou were a conference room.

And speaking of Caribou, it appears the company is taking stock in something other than its own portfolio — namely its employees’ education. Acknowledging that brewing lattes may not offer much long-term career growth, Caribou Coffee and Rasmussen College — both Minnesota institutions — have teamed up to offer Caribou employees a 10 percent cut in tuition. Caribou says the partnership is “another opportunity to foster our culture of learning.”

CityKids and the Carlson School
And then there’s the Carlson School of Management at the University of Minnesota. Sometime last winter, down on the lower level, a small coffee shop opened there and created jobs.

Stocked with your standard food court fare — ciabatta and turkey sandwiches, yogurt parfaits, rice crispy bars and coffee — the CityKid Java Café is the newest venture and a natural extension of Urban Ventures, a South Minneapolis nonprofit organization that provides academic and athletic programs for at-risk youth and their families. 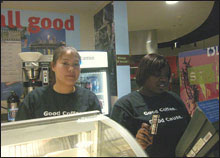 Urban Ventures has been selling CityKid Java coffee beans since 2002 to help fund its programs. Earlier this year, Urban Ventures partnered with the U of M’ s food-service provider to open its first coffee shop. It employs eight Urban Venture teenagers, who work part-time at the shop after school.

15-year-old Vulianna Speltz of Northeast Minneapolis, works behind the counter. This is her first job, and best offer.

“I was looking to get a job and then like the lady from the program I go to, she asked me if I wanted to get a job at a coffee shop that pays $8.25 [an hour] and I was gonna get a job at Dairy Queen for like $7.25 or something, so I just decided to come here because it paid more.”

Win-win situation
CityKid Java Café is open for a few hours each afternoon, and relies largely on business from the Carlson school’s evening MBA and executive business students. At first, business was slow, but now?

And while you might question the wisdom of opening a business in the middle of a recession, Mentgen says turning huge profits was never the goal. The goal was to give kids who need it a first-time work experience and a chance to earn a little dough.

“Many of them come from some pretty challenging backgrounds,” she says.

Kids like 17-year-old Markette Kuykenvall of South Minneapolis, who also works behind the counter.

“It’s pretty cool,” she says. “I like hanging out with college people.”

Markette [pronounced Mar-kee-tah] said even though she’s applied to go to nursing school, her college plans are on hold for the time being.

“I’m just not trying to go early because I’m trying to help my grandmother and my sister and them. Because I’m almost 18. My grandma is like sick, so I need to help out.”

And the money she makes working at the café?

“I give her some, give myself some,” she says.

“It’s a win-win for everyone,” says Mentgen. “The proceeds from the sales of CityKid Java coffee go back to Urban Ventures to help their programming. We employee high school students from Urban Ventures to learn-the-ropes sort of thing with their first job. And then the [Carlson School of Management] student managers are also learning how to manage, how to run a business, how to do inventory, and coach another person who’s not that much younger than them.”

“The CityKid Java Café shows that running a successful business and caring for at-risk kids are not mutually exclusive,” said Mark-Peter Lundquist of Urban Ventures.”The business school students can actually see free enterprise and compassion at work together.”