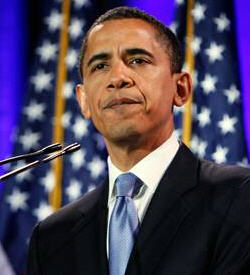 Back in January, Barack Obama swept into office promising to get the financial system on its feet again and re-regulate it to assure that nothing of the kind happens again anytime soon. The first mission was accomplished, tenuously–and temporarily?–by throwing unimaginable sums of money at financial institutions through lending, spending and guarantees, all of it ultimately backed by the public purse at minimal harm to Wall Street and the investing class. The lessons of the Japanese and Swedish experience over the past 20 years (namely, that protracted systemic bailouts don’t work and that writing down bad debt at the expense of banks and investors is the path to genuine recovery) have been duly ignored all down the line.

With yesterday’s announcement that the administration will pursue derivatives regulation, the other shoe begins to fall. And, big surprise, it’s a soft shoe. The only hard line that Obama’s Wall Street-bred economic team has taken consistently is subordinating the public interest to the wishes of the plutocrats.

Stephen Labaton and Jackie Calmes of the New York Times describe the derivatives push this way: “”The administration asked Congress to move quickly on legislation that would allow federal oversight of many kinds of exotic instruments, including credit-default swaps, the insurance contracts that caused the near-collapse of the American International Group. The Treasury secretary, Timothy F. Geithner, said the measure should require swaps and other types of derivatives to be traded on exchanges or clearinghouses and backed by capital reserves, much like the capital cushions that banks must set aside in case a borrower defaults on a loan. Taken together, the rules would probably make it more expensive for issuers, dealers and buyers alike to participate in the derivatives markets.”

Two things. First, the key word there is that “many” in the first sentence. Here’s the loophole (NYT again): “The administration plan would not require that custom-made derivative instruments — those with unique characteristics negotiated between companies — be traded on exchanges or through clearinghouses, though standardized ones would.”

And second, the proposal really seems directed at making derivatives markets more rational and efficient. If the regulatory package that emerges is truly as advertised, it would likely depress the trade in derivatives for a time–until a new set of products and practices evolved to fly below the government’s radar.

As half-measures go, depressing the trade in derivatives, and thus reducing the systemic risk they pose, would be a good thing. But why stop there? What is the social good that’s accomplished by facilitating their survival in any form? Derivatives have always been touted as a means of reducing risk and promoting the flow of capital. But as we’ve learned from the past year, there is no such thing as a derivatives market that can reduce systemic risk in a crisis, because when the whole system goes south, no one can pay off on their derivative contracts and they become just another monstrously expensive class of bad debt.

And that’s to say nothing of the fact that a lot of derivatives trading is pure gambling–bets on the performance of financial assets placed by people and institutions who have no stake whatsoever in those underlying assets. (During a February congressional turf battle over a bill on derivatives regulation, Minnesota Rep. Collin Peterson’s ag committee killed a provision that would have prohibited these “naked” trades. And Wall Street remains resolute in its opposition to any such ban.)

The logic of “risk management” through credit default swaps and other derivatives contracts is to mitigate the risk attached to expanding debt past levels that seem wise by conventional measures. Another way of putting it is that derivatives exist to prod the financial system into more debt and more stratospheric degrees of leverage. Is that really the path to a prudent, responsible, stable financial system? Is it how we should go about trying to put the bubble years in our rear-view mirror?

I vote with Warren Buffett on derivatives. Here’s what he said on the subject in his March letter to shareholders:

“Derivatives are dangerous. They have dramatically increased the leverage and risks in our financial system. They have made it almost impossible for investors to understand and analyze our largest commercial banks and investment banks…

“Improved ‘transparency’–a favorite remedy of politicians, commentators and financial regulators for averting future train wrecks–won’t cure the problems that derivatives pose. I know of no reporting mechanism that would come close to describing and measuring the risks in a huge and complex portfolio of derivatives. Auditors can’t audit these contracts, and regulators can’t regulate them.”