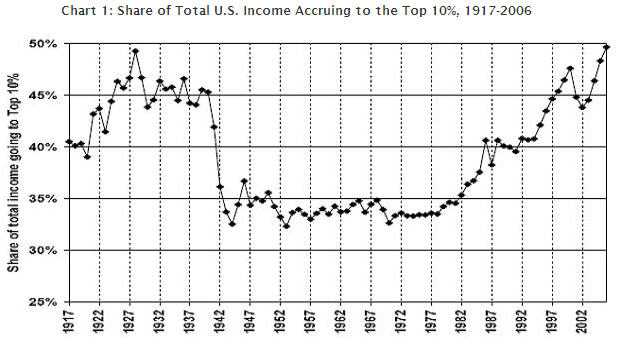 Long before the housing bubble finally broke, you would see cautionary comparisons from time to time of the parallels between the concentration of U.S. income in the 1920s and the 1990s and 2000s. The chart reproduced here, based on the work of economist Emmanuel Saez (who won the John Bates Clark Medal last week), traces the share of national income flowing to the top 10 percent of earners between 1917 and 2006.

Economic analyses of both periods tend to emphasize the explosive growth of speculation in financial markets. You might infer that it was the speculation that produced the income growth at the top, and to an extent that must be true. But the climax of speculative activity in both periods (from the start of 1928 onward in the pre-depression era, and from 2003-04 onward in the current instance) came after years of growing income polarization that produced massive concentration of gains at the top.

And that suggests that to the extent there’s a causal relationship here, it was the polarization of incomes that produced the speculative booms rather than the other way around. By way of contrast, the golden age of U.S. capitalism–both from a worker’s perspective and in terms of American economic dominance globally–came during a period from the 1950s to the early 1970s when manufacturing was king, the top 10 percent were earning a much smaller share of the national income, and finance and banking played a mere supporting role in the economy.

We’ve all heard reference to people with “more money than they know what to do with.” So here is another reason to start redressing the polarization of income in America: When the wealthiest segment of the population controls the lion’s share of income, they do not just consume gaudy baubles and build monuments to their own dubious taste; they blow unsustainable asset bubbles, too.