With her confrontational style, U.S. Rep. Michele Bachmann seems to invite competition. And sure enough, the line of candidates ready to take on the 6th District lightning rod already is forming. 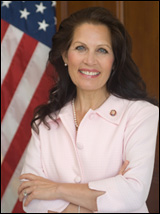 First in line is Maureen Reed, a physician, former chairwoman of the University of Minnesota regents and former 2006 Independence Party lieutenant governor candidate who ran with Peter Hutchinson. She’s also a former vice president of Health Partners. In other words, she’s no lightweight.

But soon after the words left her mouth that she was getting into the race, El Tinklenberg, who lost a close race to Bachmann on Nov. 4, said he plans to run again, too. His formal announcement will come in early summer, he said. But his website will be up and running soon, and he’ll begin the task of fundraising now.

Reed announced Wednesday that she will run for the 6th District seat and seek both the DFL and Independence Party endorsements. Tinklenberg had the endorsements of both parties last year and will again seek that double support.

“I know to some it seems like campaigns go on and on,” Reed said in a telephone interview. “They do go on. But in some ways, I wish I could have started months ago. Rome wasn’t built in a day.”

Waiting for Tinklenberg?
Reed implied she had delayed her decision to announce because she was waiting for El Tinklenberg to decide on his plans. Tinklenberg, you’ll recall, is the moderate DFLer who raised tons of money in the final weeks of his campaign — thanks to Bachmann’s controversial “Hardball” TV comments — but ended up losing to Bachmann in a three-way race.

Because of Bachmann’s questioning of the patriotism of her congressional colleagues, Tinklenberg ended up with higher name recognition than he’d ever had in his political career. 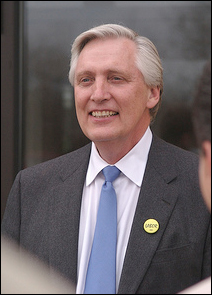 He also ended up with a substantial surplus of money. As reported by MinnPost’s Blois Olson recently, Tinklenberg had $453,000 left at the end of his campaign. (The money poured in so late and so fast, that he couldn’t spend it all.) Of that, Tinklenberg gave $250,000 to the Democratic Congressional Campaign Committee and still has $183,503 left if he decides to run again.

“I met with El months ago,” Reed said, “and let him know I was interested in running. He wasn’t sure what he was going to do. So I decided to wait.”

Time passed. Tinklenberg didn’t get back to her with his plans. While she waited for Tinklenberg’s call, she kept talking to people.

“I was talking to DFLers, Independents and moderate Republicans,” she said. “They believe this is a winnable race.”

Reed staking out middle ground
Reed’s approach will be little different from Tinklenberg’s. She will offer herself as the candidate in the middle, a self-described “Blue Dog Democrat.”

That’s the same ground Tinklenberg tried to stake out in the conservative district. He had the endorsement of both the Independence Party and the DFL. He  was pro-gun and neither pro-life nor pro-choice. He was middle, middle, middle and still he lost.

Is he concerned the two are running from the same place?

He noted that her only political experience was “running against the DFL” team on the IP gubernatorial ticket, a ticket that garnered only about 6 percent of the vote.  In fairness, it should be noted that Tinklenberg was appointed Department of Transportation commissioner under an Independence Party governor, Jesse Ventura.

Many DFLers believe it wasn’t Tinklenberg’s stances on the issues that cost him the election. Rather, they believe he lost because his campaign lacked both focus and resources, until Bachmann’s mid-October interview with Chris Matthews on “Hardball.”

It should be noted that the campaigns of all losing candidates are always seen, by insiders, as poorly run.

Tinklenberg thinks everything will be different for him this time around. He believes he’ll have early support of the DCCC. The national party was not a factor in the 6th District race until the final weeks of his last campaign. He’s earned that support. He contributed some of his surplus campaign money to the campaign of Democrat Scott Murphy in the recent special election congressional race in New York. He also believes his name recognition is far greater from the last race.
“We’ve established credibility both nationally and within the district,” Tinklenberg said. “Delegates (at the endorsing convention) will respond to that.”

Challenge 1: Bachmann nearly lost an election she had in the bag by doing that “Hardball” interview.  The lesson most pols would have taken from that experience would have been to keep their mouths shut and their heads down. Not Bachmann. A week doesn’t go by that she isn’t doing a nationally television or radio interview. Those sessions often include wildly controversial statements. But they don’t seem to hurt her.

“When everybody’s watching you, somebody will find fault with something you have to say,” said Michelle Marston, who runs Bachmann’s campaign office. “We can’t help what the press focuses on. She does a telephone town hall meeting once a week. Overwhelmingly, people are saying, ‘Keep fighting for us. Stop them from spending money. The people from Santa Barbara can think what they want; we’re concerned about what the people in the 6th think.”

In fact, her views, which agitate so many, have made her a money-raising machine.

As Olson reported in his recent MinnPost piece, Bachmann was the top fundraiser of everyone in the Minnesota congressional delegation.

On the other hand, some of the statements Bachmann makes so agitate those on the left that whoever runs against her will have a chance to raise money fast, too.

Challenge 2: Bachmann never has lost the devotion of her base, the social conservatives from fundamentalist churches.

Where does Reed stand on socially conservative issues, such as abortion, gun rights and gay marriage?

For the moment, she’s not saying.

“I want to concentrate on the things that matter most to people day in and day out,” Reed said. “The economy, health care, jobs. There will come a time to go into detail on a whole range of issues.”

There’s a bit of contradiction in Reed’s lack of comment on her positions. Right after saying she wasn’t yet ready to talk about her stances on hot-button issues, she explained how she will deal with them.

“What is important is that you are authentic and people know where you stand and don’t bob and weave,” she said.

Clearly, Reed does not want to get into either attacking or ridiculing Bachmann.

“My reason to run is that the real issues of real people, the real problems, are not being addressed,” Reed said when asked about Bachmann. “What I hear and know about people in the district is that they are losing jobs and homes. Businesses are closing. These things are very difficult to tackle but there are solutions. … To be ideological on one side or the other is not the best way to solve problems.”

It should be noted that Tinklenberg took such an above-the-fray approach, too, for the first several months of his campaign. It wasn’t until he started making the point that Bachmann is out of the mainstream, a non-player in Congress, that he made his big jump in the polls.

And he’s picking up where he left off.

“She has persisted in her behavior,” said Tinklenberg of some of Bachmann’s comments. “This could be fun. She shows a total detachment from reality. It must be liberating to live in a world where you can totally make stuff up.”

Health care expertise her issue
Reed believes her main strength in any race will be her understanding of health care issues, an understanding from serving as both a physician for 20 years and as a health-care administrator.

“I went to the websites of the House and the Senate,” Reed said. “There are only about two dozen senators and representatives that have medical backgrounds.”

The health care industry, she said, is “a huge drag on the economy.” Reforms must be made, she said, but her thoughts are not a simplistic up or down on a national health care system.

Bachmann has shown she’s a master of sound-bite solutions to complex problems.

It is interesting to note — as The Minnesota Independent did in a short article Tuesday — that Bachmann once came to Reed’s rescue. That’s when she was a member of the board of regents. In 2003, there was a movement by some legislators from her district to replace Reed on the board. Bachmann, a state senator at the time, and others came to her rescue.

“It would be a shame to lose Dr. Reed’s talents and tenacity on the board,” Bachmann was quoted as saying in the St. Paul Pioneer Press at the time.

“I am grateful for her support in 2003,” said Reed of Bachmann.
That two moderates already are in the race likely means that others, from farther left on the DFL political spectrum, also will see opportunity in the 6th. The line will get longer. And the IPs have not yet made it clear whether they’ll endorse one of their own this time, or again focus their efforts behind a moderate DFLer.

“She’s focused on things like cap and trade and all of the spending that’s going on here, not who our opponent’s going to be,” said Marston.