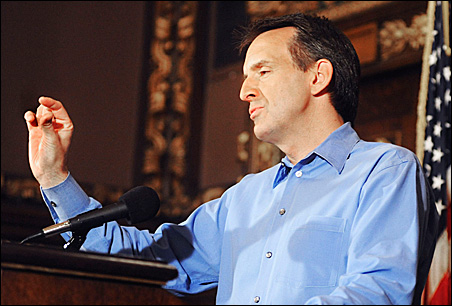 He will veto the DFL tax bill that was blasted through the Legislature in the final seconds of the session Monday night.

He will veto the medical marijuana bill, though, “I have great empathy for the sick.”

He will veto the election bill, because it was not done in a “bipartisan way.”

And he’ll look closely at the Legacy bill, too, to see if the final product is closer to the House or Senate version. If it looks more like the House version, he’ll veto that, too.

Despite all of these vows of vetoes and soon, unallotment, Pawlenty seemed to be in an almost buoyant mood.

“I’m not here to rehash the DFL failures,” he said. “The sky is blue, the sun is out. The minds of Minnesotans are turning to Memorial Day, summer, fishing. . . .We’re a strong state, we continue to lead the nation in quality of life. I’m confident, optimistic we can get through this.”

Still, it should be noted that by the time Pawlenty is done vetoing and unalloting, for the first time Minnesota will see a real reduction in state spending over a biennium. In the current bienniem, the state has operated with revenues of about $34 billion. After Pawlenty is done cutting, the next biennium will total about $31 billion from state revenues and will receive about $2 billion in one-time federal money.

By Pawlenty’s math, he will be cutting “at most 3 or 4 per cent” from the state’s budget.   He promised to announce where the big unallotment cuts will come in short order, likely before the start of the new fiscal year, which begins July 1. He also hinted that many of the cuts will come from the second year of the biennium, meaning there will be a legislative session between now and when the cuts would actually take place.

“This will be done in a quick, thoughtful manner,” said Pawlenty.

He even said there’s the public to advise him: People can send their thoughts on what should be cut to budgetideas@state.mn.us.

The governor insists he’s on firm legal ground using the unallotment process in a way it’s never been used before.

“It’s going to be a challenge,” Pawlenty said. “But it’s not an option. It’s a duty. I will fulfill that duty.”

But DFLers are implying that he may be skirting the intention of the unallotment statute.

Rep. Ryan Winkler, DFL-St. Louis Park, spoke to the media following Pawlenty’s news conference. Though Winkler said the DFL has no plans to take legal action against the governor, he hinted that institutions that may get hit hard by unallotment — local governments and hospitals, for example — may raise legal questions.

The law, Winkler said, gives the governor authority to unallot when there are “unanticipated” revenue shortfalls.

“In this case,” Winkler said, “the governor decided there would be a shortfall.”

Winkler noted that Pawlenty signed all of the legislative spending bills but now promises to veto the bill that would pay for the spending.

Unlike times in the past, when he’s used his bully pulpit to say unkind things about DFLers in the Legislature, Pawlenty seemed to go out of his way not to use angry rhetoric.

He even called the overall work of the Legislature “a reasonable conclusion given the circumstances.”

Pawlenty skirted a question about how his decisions during this session were guided by his own political ambitions.

“I get these questions a lot,” Pawlenty said. “There are a lot of people in the Legislature who have announced they’re running for governor. Ask the others those same questions. … This is not some new position for me. There’s nothing new here. I’ve said all along you don’t raise taxes in the worst recession in 60 years.”