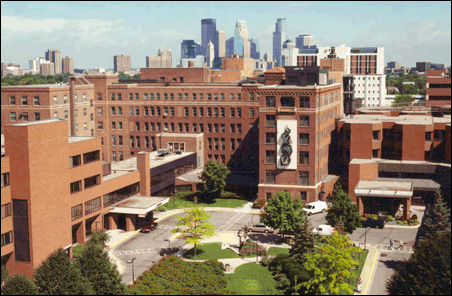 Phyllis Jaeger thought her job was secure until her position at Abbott Northwestern Hospital was terminated in October 2008.

“I was stunned. How could that be?” said Jaeger, who at the time was an outpatient clinic manager with 33 years of nursing experience.

Throughout 2008, monthly hospital management meetings increasingly focused on rising hospital and clinic expenses, particularly uncompensated care costs, Jaeger said. And although she learned of pending workforce reductions in early September, she never thought her clinic would be affected — it was productive, heavily supported by donations and had met its end of year revenue projection.

Jaeger is one of hundreds of Minnesota hospital and clinic employees laid off within the past eight months, largely because of rising costs of uncompensated care.

From 2003 to 2007, uncompensated hospital care in Minnesota nearly doubled, increasing from $128.7 million to $247.4 million, according to an analysis of data from the Minnesota Department of Health (MDH) Health Care Cost Information System (HCCIS).

“Uncompensated care is growing at unprecedented rates — some hospitals have reported 30 to 50 percent increases in the past year,” said Minnesota Hospital Association President Lawrence Massa.

Yet hospitals have an obligation to provide care to everyone regardless of their ability to pay — it’s part of their mission and it’s a federal law, Massa said.

“The increase in overall uncompensated care is a significant factor in the financial pressures that hospitals and health systems are under,” Allina spokesman David Kanihan said.

With the state struggling with its own budget shortfalls, hospitals are expecting reductions in state reimbursement rates, which are also contributing to financial difficulties. “While our business, if you will, our busy-ness, has not gone down tremendously, our ability to get paid for our services has…and to take a workforce reduction when we still have to care for patients is tough,” Kanihan said.

People still get injured, they still get sick, and they still need care — and that knows no economic boundary, Kanihan said. “Meanwhile, the budget limitations [for the hospitals] are real and I think they’re going to be with us for a long time.”

‘It was a miracle’
Beth Sanchez understands the value of uncompensated care. Sanchez, who works in sales and can’t afford health insurance, was uninsured when pelvic pain started that persisted for months. Despite fears of cervical cancer, she postponed medical care — concerned she couldn’t afford the bill. But her worries finally disappeared when her pain was evaluated at no cost to her. She had qualified for charity care.

“Several times I felt grateful that I could get the care I needed even though I was not insured,” Sanchez said. “It was a miracle.”

Hospitals report charges for charity care and bad debt to MDH each year. Since charges are typically higher than the actual cost incurred by the hospital to provide the service, numbers reported in this analysis were adjusted to more accurately reflect the cost of providing care.

This recent change in bad debt may reflect increasing numbers of people who are underinsured, Kanihan said. As insurance covers less, people pay more for their health care. “And they’re not able to do it,” Kanihan said. But whether charity care or bad debt, it’s all the same — an unpaid bill.

“That’s a substantial impediment to the viability of our institution or any other institution that would have numbers of that magnitude,” said Mike Harristhal, HCMC vice president of public policy and strategy. “We live on a razor thin margin … so when you have an increase in uncompensated care, that means we are already at the tipping point.”

Focus on HCMC
HCMC is the largest provider of uncompensated care for several reasons: its location in an urban area where people without resources tend to live, a huge outpatient system with charity care and sliding fee services that allow anyone to access care, a reputation that HCMC is able to handle any kind of illness or injury and the limited ability of other Minnesota hospitals to incur uncompensated care costs, Harristhal said. 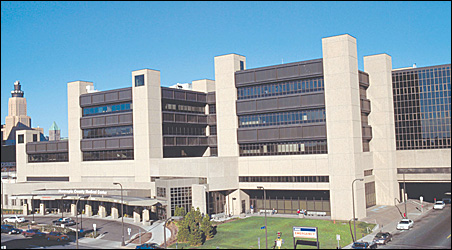 pathology.umn.edu
Hennepin County Medical Center: May need to limit some clinic services for people who reside outside Hennepin County.

“We can’t be unthoughtful about eliminating programs [at HCMC]…by definition, the reason these programs exist and have a sizable following is because the private sector is unable or unwilling to provide these services,” Harristhal said.

Yet eliminating programs or reducing services may be necessary to preserve the institution. For example, even though HCMC historically has served the entire state, it may need to limit some clinic services for people who reside outside Hennepin County, Harristhal said.

Ultimately, patients are the ones who will suffer because of increasing uncompensated care costs and other financial pressures. Either access to care will be limited or patients will have to wait longer for services. And  patients may put off getting health care until they have a catastrophic illness, Harristhal said.

Although HCMC is not the only Minnesota hospital carrying the burden of increasing uncompensated care costs, these costs are concentrated among a small number of hospitals. In 2007, five hospitals accounted for more than one third of total uncompensated care costs. The top five were HCMC, Regions Hospital, University of Minnesota Medical Center-Fairview, Saint Marys Hospital and North Memorial Medical Center.

Growing pressures
Minnesota hospitals face a dismal financial situation. Net income fell from a positive 4.8 percent in third quarter 2007 to a negative 2.5 percent in third quarter 2008, according to the Minnesota Hospital Association. And yet Minnesota hospitals are critical to the overall health of this state. “The health care that [hospital systems] provide to our citizens is crucial to the quality of life in Minnesota,” Massa said. In addition, as large employers within communities, hospitals contribute to the overall economic strength of the state, Massa said.

Historically, increasing uncompensated care costs were shifted to people with private health insurance through higher premiums. But we have nearly exhausted this option. “So then the only things hospitals can do is begin to eliminate other programs in order to be able to focus on their core missions,” Massa said.

Growing financial pressures have resulted in changes at many Minnesota hospitals. In addition to workforce reductions and administrative restructuring, some hospitals have eliminated home care and chemical dependency treatment programs, Massa said. Other changes may be necessary, such as hospital consolidations and closures.

“[Although] hospitals are really trying to protect care at the bedside…I think we’re running out of places to cut that’s not going to impact patient care,” Massa said.

Kay Schwebke is a physician and a health journalism graduate student at the University of Minnesota School of Journalism and Mass Communication.