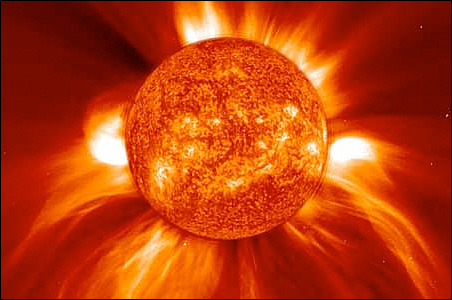 SOHO/NASA
An image taken from the Solar and Heliospheric Observatory Extreme Ultraviolet Imaging Telescope that shows a widely spreading coronal mass ejection as it blasts more than a billion tons of matter out into space at millions of kilometers per hour.

WASHINGTON, D.C. — Whether it is a red “rayed arc,” a green “omega band or a pulsating “final phase” aurora, the Northern Lights that occasionally dance across Minnesota’s night skies are always breathtaking. And as the Sun begins its ascension toward the next “solar maximum,” expected to arrive between 2010 and 2012, there will be more storms and, as a result, more aurora high in the atmosphere.

But the charged particles from the Sun can do more than create pretty lights when they interact with the Earth’s magnetic fields, and “space weather” scientists fear an extreme solar storm could do enormous damage to our technology.

For the scientists gathered recently for the 2009 Space Weather Enterprise Forum in Washington, D.C., the talk of the Earth being hit by catastrophic solar storms — both past and predicted — was almost casual, the currency of the work they do.

There was the legendary “Carrington Event,” a series of magnetic storms from the sun that hit the Earth in August and September of 1859, disrupting telegraph lines across the United States and triggering aurora so bright they turned the night skies into day as far south as the Caribbean. The storm went on for days.

They spoke of a solar storm in May of 1921 that stunned scientists with its power and one in March of 1989 that blacked out the entire power grid in Quebec, Canada, in just 92 seconds. In 2003, the “Halloween storm” caused a massive blackout in the Northeast United States and $10 billion worth of damage to electrical systems.

There are lessons to be learned from these past events, the researchers emphasized, and the danger posed by solar storms is increasing. This growing threat comes not from changes in the Sun, but from the increasing dependence of human societies on technology and electricity. A storm on the scale of the Carrington Event could damage the U.S. electrical grid to such an extent that vast regions of the country could be without power for weeks, perhaps months. Without electricity, drinkable water would soon be in short supply, as would fuel, food, communications and just about everything else society depends on to function.

Lives at risk
“The consequences would be almost incalculable,” said Daniel Baker, director of the University of Colorado’s laboratory for atmospheric and space physics. An extreme solar storm hitting our modern, high-tech world would severely disrupt oil and gas supplies, emergency and government services, the banking and finance industry, and transportation. The cost of the damage could reach into the trillions of dollars, he said.

New electrical systems are designed to be efficient, which is different from being robust and hardened against the effects of a solar storm. “There is an efficiency-vulnerability tradeoff,” said George Mason University social scientist Todd LaPorte, who studies critical infrastructures. “Sometimes efficiency isn’t your friend.

“Large storms can literally place millions of lives at risk,” he said, and our growing dependence on technology is increasing that risk. “We should be preparing for a storm four to 10 times the intensity of the 1989 event [that blacked out Quebec]. There is a false sense of security.”

The reason the danger posed by space weather is not drawing more concern from the federal government, electric utilities or the public was summed up by David Crain of the space systems division of ITT, an engineering and technology company.

“The problem with space weather is nobody directly dies of space weather, and that is a detriment in getting funding and increasing public education,” he said.

Unlike hurricanes or floods, the damage caused by solar storms is to underlying systems and not obvious in terms of visible devastation.

Heeding warnings
Preparing for extreme solar storms also involves spending millions, even billions, of dollars, and it is difficult to get the government to spend significant money to prepare for an event that is merely predicted, the speakers agreed.

“We have a hard time thinking about anticipation,” said LaPorte. “We tend to react to events, not anticipate them. We’re not good at heeding warnings.”

“We have developed a new awareness of the extremes of severe geomagnetic storms,” said John Kappenman, founder of Storm Analysis Consultants and an expert on the vulnerability of the power grid to solar storms.

The scientists were assured by officials from the Obama administration’s Office of Science and Technology Policy that the threats of space weather are a concern. But because solar storms do not result in immediate, visible damage, the participants at the forum said public education is critical to developing and implementing a plan to mitigate the damage from a future extreme solar storm.

“But if you do too much of that, what you end up with in the public is disaster fatigue,” Crain said.

The danger of solar storms
Solar activity oscillates between minimums and maximums on an 11-year cycle, and the Sun is currently beginning its “climb” toward the next maximum in 2011 or 2012. As the Sun gets closer to its maximum, the likelihood of major storms increases.

The two kinds of solar storms experts are concerned about are solar flares and coronal mass ejections. Solar flares appear as explosive bright spots on the surface of the Sun, which is about 93 million miles from Earth. The flares occur when magnetic energy built up in the solar atmosphere near a sunspot is suddenly released in a blast of radiation and electrically charged particles.

A coronal mass ejection (CME) is, according to NASA, the “violent eruption of a huge magnetic cloud of plasma from the Sun’s outer atmosphere.” The plasma from a CME — typically more than 10 billion tons of partially ionized gas — travels thorough space at several million miles per hour. A CME cloud can hit the solar wind — electrons and protons that normally stream from the Sun — and accelerate those particles into a high-speed shock wave. If a CME happens on the side of the Sun facing Earth, the shock wave can collide with Earth’s magnetic field. This impact can dump about 1500 gigawatts of electricity into the Earth’s atmosphere, twice the generating power of the entire U.S. electrical system.

Extreme CME’s can destroy the electronics in orbiting satellites, including those that provide data for all of our GPS devices. At the surface, extreme CME’s change the strength of the Earth’s magnetic fields in ways that can trigger massive power surges that blow power transformers and damage electrical grids. These power surges can even create corrosive electrical currents in gas and oil pipelines. —Jim Dawson

The Space Plasma Research Group at the University of Minnesota has created a web page to guide people in viewing and understanding both aurora and space weather. The page, Aurora Borealis in Minnesota, can be found here.

A video about space storms can be found here.