If you were there, you’re invited back for a 40th reunion party next weekend. The National Guard hasn’t been deployed, but they move quickly. Remember?

It had started as a plan for a much more modest gathering, according to the most widely accepted “origin story.” A student leader at North Dakota State University in Fargo was miffed that he and his friends couldn’t afford a spring break trip to someplace exotic.

But plans for the “Zip to Zap” grew as stories appeared in college newspapers in Fargo and across the state. The Associated Press took note of the impending youth invasion and spread word around the country.

It ended in a drunken tumult. The local bar owner may have contributed to the rowdiness by raising the price of beer when a band he had hired started to play. Students trashed the place, tossing a jukebox through a window, and tore apart an abandoned building to fuel a bonfire on Main Street. According to the bar owner, they also threw much of his furniture onto the fire, including the jukebox.

National Guard — and CBS Evening News
The North Dakota National Guard was called to disperse the throng, the only time the state guard has ever been called upon to quell a riot, and pictures of 500 soldiers chasing regiments of college students through Zap and the rural countryside was the lead story that night on the CBS Evening News with Walter Cronkite.

I watched, amused and horrified and dumbstruck, from the safety and serenity of the University of North Dakota campus in Grand Forks, where as editor of the Dakota Student I had fanned the “Zip to Zap” boom shamelessly.

An AP reporter from Bismarck, clearly irritated that he had been ordered out on that spring weekend to cover the “riot,” demanded to know why I, having helped to foment the disaster, hadn’t even shown up. I mumbled something about finals approaching, and he hung up on me. 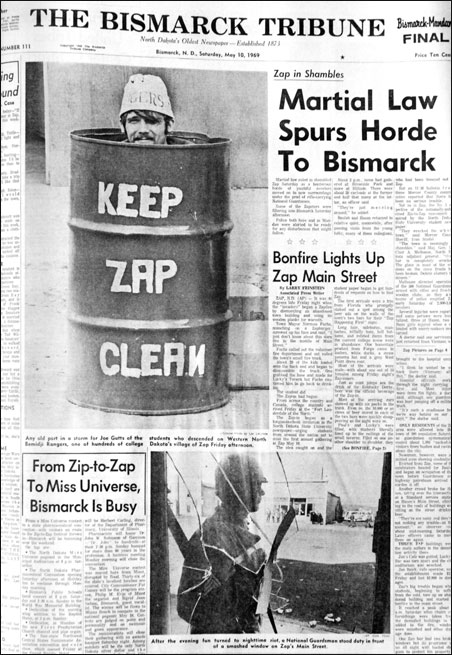 I remember hearing that early arrivals found a banner: “South Carolina was here first.” Or maybe it was Tennessee. In the Dakota Student, we had reported inquiries from students in Minnesota, Iowa and Ohio, and plans by students at San Diego State in California to charter buses for 250. But most of the young people who descended on Zap, which then (as now) claimed a population of 250 or so, were from North Dakota’s colleges and universities.

Ten people bid on that eBay button in March. The winning bidder paid $57.35, plus shipping.

Maybe he or she will be at the Zip to Zap reunion next weekend (May 16).

The father of Zip to Zap
Chuck Stroup plans to be back. A banker now in western North Dakota, he was NDSU student president in 1969 and is widely seen as father of the Zip to Zap.

“I was sitting in my office one evening and I was thinking about the poor suckers like me who weren’t going to Fort Lauderdale” for spring break in 1969, he told the Dickinson (N.D.) Press recently. “And I thought, well geez, NDSU knows how to party. Why don’t we have a party over a weekend out of town and invite all the other college kids.”

Kevin Carvell, who was my counterpart at the Spectrum, NDSU’s student newspaper, made sure everybody knew about Zap and how to get there, part of the famous (to us Nodaks) Rice Krispies Tour of western North Dakota. (Say it out loud: Zap, Gackle and Mott.)

“I got kind of carried away with the story,” Carvell, recently retired as an aide to U.S. Sen. Byron Dorgan, D-N.D., says now.

He said he was “mortified” when the guard was called out, and he fled to his hometown of Mott “and hid in the basement of my parents’ house for a couple days.”

The Dickinson paper caught up with a former guard soldier, Rick Price, who said the troops formed up outside Zap after midnight but didn’t march in until morning. They were nervous, he said. This was, after all, a time of massive student protests against the war in Vietnam.

But by morning, most of the students had passed out or fallen asleep.

It was supposed to be great fun. Mayor Norman Fuchs had promised to welcome the young revelers with a UND-NDSU tug-of-war over the creek that runs through town, plus a barbecued beef chow line and lots of German fleisch kuechle.

When it comes to “good, clean, beer-bust, food-munching, rib-tickling fun, most of us will be ready to show you a few tricks,” Fuchs told the UND student president in a letter, reprinted in the Dakota Student on May 6.

But “we’re a peace-loving community,” the mayor added. “We’ll take a strong measure to discourage riots.”

Trashed, but rebuilt, too
Keith Kasanke, a resident of Zap, is organizing the reunion party.

It got trashed, but it got rebuilt a little, too.

I’ve always regretted my decision to be “responsible” that weekend 40 years ago, hitting the books instead of hitting the road. I wish I had a button that proclaims I was there. But while I didn’t zip, I did organize the “Zap Relief Fund.”

We set up an account at a Grand Forks bank and eventually raised about $2,000, which I believe the good people of Zap put into a new community center. Contributions came from all over the country.

One check, for $10, came all the way from Vietnam, from a soldier serving in the war. I’ve always suspected he wished mightily that he could have been in Zap in May 1969.

Correction: An earlier version of this story had the reunion date wrong. It is May 16.

Some who zipped to Zap will gather again