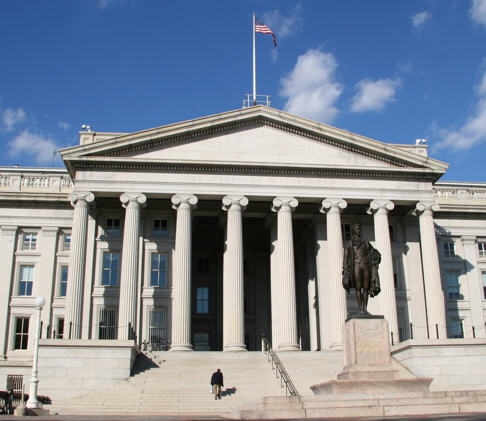 The show-and-tell part of the bank stress test results won’t happen until this afternoon, but most of the bottom-line findings have already been leaked. (Calculated Risk has put them in a handy table.) By the lights of the Treasury Department, only four of 19 institutions need $5 billion or more: Bank of America, $34 billion; Wells Fargo, $15 billion; GMAC, $11.5 billion; and Citigroup $5 billion. Sunny headlines abound this morning: “Stress-test leaks suggest big bank bailouts may be over” (NYT). “Fed’s bank results ‘reassuring,’ show no insolvency” (Bloomberg); “Credit risk tumbles to lowest since Lehman crisis on bank tests” (Bloomberg again).

The news is buoying markets, as it was designed to do. The stress test program is the largest scale, and most politically critical, propaganda offensive of the crisis era that started last fall–a last-ditch effort to convince investors and markets that the major banks are not broke and should not need additional government bailout rounds on a par with the $700 billion TARP. As one analyst–who, appropriately, gets the last word in the NYT story linked above–puts it, “This is sending a message that the banks need more capital, but their losses are manageable and the system itself is solvent. Whether it sticks is something else.”

The Fed and FDIC will abet this exercise in wish fulfillment by continuing to use their balance sheets to extend guarantees on assets, because those measures don’t have to be approved by Congress or subjected to much public scrutiny. That had better be enough, because if more congressional bailout dollars were a difficult sell before the stress test PR blitz, they’ll be even harder to justify afterward.

Let’s review the recipe for all this good news:

Portray average-to-best-case scenarios as worst-case scenarios. As Nouriel Roubini noted in Tuesday’s Wall Street Journal, “using a market-based scenario in the stress tests would have given worse results than the adverse scenario chosen by the regulators. For example, the first quarter’s unemployment rate of 8.1% is higher than the regulators’ “worst case” scenario of 7.9% for this same period. At the rate of job losses in the U.S. today, we will surpass a 10.3% unemployment rate this year — the stress test’s worst possible scenario for 2010.”

Let the banks decide what their “risky” assets are. One of the most vital problems in sorting out banks’ capital gaps is determining what portion of their assets are worth less than they’re booked at. Most people probably assume that impartial government regulators reviewed the banks’ balance sheets in close detail to make these judgments. But regulators reportedly relied to a large extent on the banks’ assessments of their assets–and indeed, it would have been impossible to conclude the tests this quickly if they hadn’t.

Have regulators negotiate with the banks about which information to release, and how to couch it.  This is why there was so much misdirection and two-stepping over when the results would be released, as the Financial Times reported last Friday.

Vis a vis the banks’ purported recovery, Dean Baker has an incisive item about the role of government in cooking the books at Citigroup:

“[T]he government effectively spent $25 billion to get a 36 percent stake in Citi that could have been purchased on the market for just $7 billion. When banks can arrange deals like this with the government, it is not surprising that their books look good. Most businesses would be doing quite well if they could get the government to pay them more than three times the market value of their stock.”

There’s a nifty findings summary at Bloomberg, but you have to click on the “graphic” tab once you get to the story.