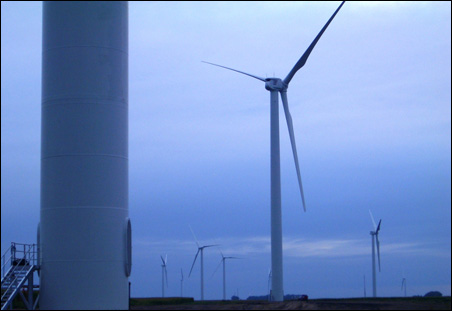 To get the wind to blow over a tranquil sea, sailors in the Royal Navy used to whistle, drive a clasp knife into the mainmast, or scratch a backstay. The wind industry in Minnesota, which faces greater challenges than a calm day, may need to look into one of the old superstitions for help.

The immediate problem in Minnesota, as elsewhere, is not variable access, old transmission systems or storage capacity — all hardy perennials. It is a clogged-up capital market that has frustrated developers of the renewable resource.

Take the case of National Wind. The Minnesota-based company, which has its own market niche, has an intriguing business-model mix of local partnerships, supply, demand and government support. But the model takes money, and not a little.

“Right now everything is at a standstill,” National Wind CEO Leon Steinberg told me.

National Wind, which develops utility-scale projects (50 megawatts and over), sets up partnership LLCs with local landowners and other community leaders. Rather than stick turbines in the ground and pay farmers for the privilege (a typical lease might be for $6,000 per turbine per year), National Wind establishes what looks a lot like a co-op and local farmers have an ownership stake in the business.

National is a large player in a relatively new area that the state has called Community-Based Development (C-BED). There are eight C-BED wind generators at work in Minnesota; National Wind developed the largest (50 megawatts) near the Cottonwood County town of Jeffers. The Jeffers system (National has since sold its stake to Edison Mission Group) has 20 turbines generating 2.5 megawatts each.

Dramatic growth, and then a halt
C-BED projects grew dramatically during 2008 — and then came to a screeching halt. The economy was already in free-fall and the tax credit market, which is used to finance a typical project, was dried up.

Most of the operational Minnesota C-BED projects are smaller than 50 megawatts. Large or small, those in the industry hope that the federal stimulus plan will alleviate the bad credit problem in a few months, and “once that happens there will be a rush to the goal line,” Steinberg said.

The stimulus package includes investment tax credits, as well as cash grants, $6 billion in federally guaranteed loans, and Department of Agriculture funds for qualified projects. Companies will be able to get started with about a 20 percent equity stake, said Dan Yarano, an attorney for Fredrikson and Byron.

Yarano helps establish wind-energy and biomass companies. He said the stimulus package will get money flowing in the coming months. “But we are all guessing [as to when],” he said. “People are exploring financing but nobody is inking deals.”

Waiting for DOE rules
The industry is waiting for the Department of Energy to publish the rules about how the stimulus package can be applied.

Dan Juhl of Woodstock, Minn., is often acknowledged as the founder of “small wind” in Minnesota. He’s developed 14 wind farms that develop a total of 117 megawatts of energy and took his company public in 2008.

“Our equity partners didn’t fall off the cliff,” he said. “They took a deep breath.”

Minnesota is fourth nationally in wind energy production capacity. State requirements that 7 percent of our power be renewable by next year (and 25 percent by 2025) are helping drive the market.

Wind still faces problems of a) transmission; b) access on demand (there isn’t any — see whistling, knife and scratching references above); and c) storage. Transmission is the biggest long-term challenge, mostly because the wind farms are far away from the population centers; two decades of transmission-line neglect did not help.

“The next great leap forward is going to be defined by transmission,” Juhl said.