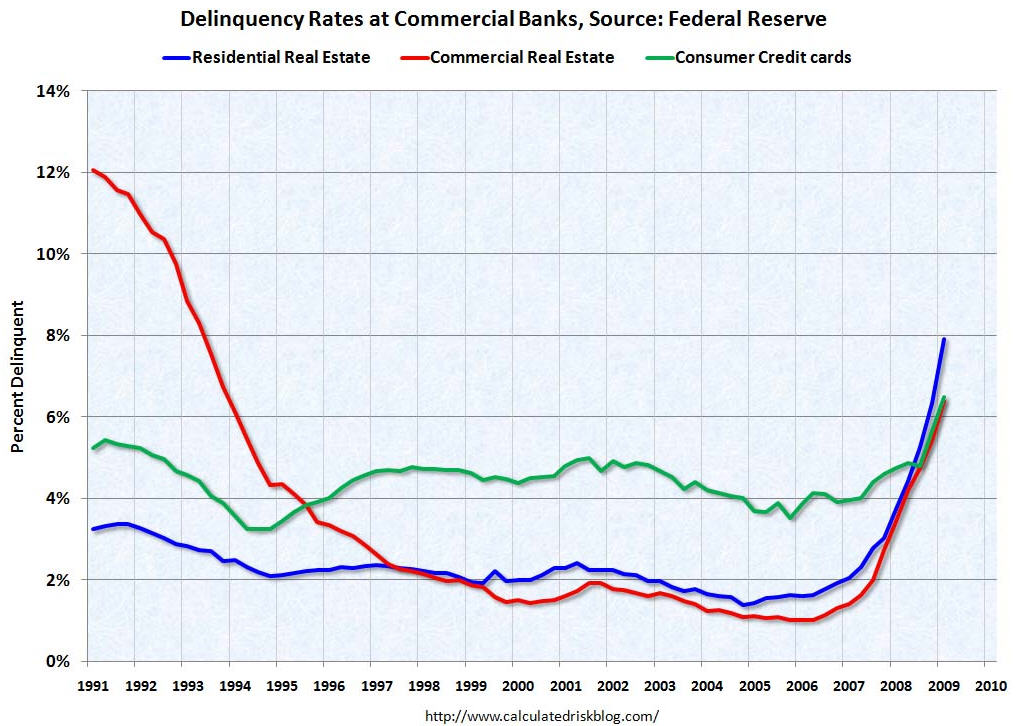 The past month-plus has been a strange, schizoid time in the financial press. Talk of green shoots and recovery sits cheek-by-jowl with accounts of serious and chronic problems that show no sign of abating. The good news–banks are starting to lend to each other again, major economic indicators are no longer in the terrifying freefall of the autumn and winter, the stock market has made gains and at least for the moment held them, the public is feeling less freaked out–has inevitably dominated the headlines.

At the same time, there is plenty of sobering news about the debt monster that still looms over the economy.

1) Of particular note is the Federal Reserve survey (PDF) of senior loan officers released earlier this month. David Wessel of the Wall Street Journal summarizes the findings across major lending categories–commercial/industrial, commercial real estate, prime and subprime mortgages, home equity, and other consumer lending–and all of them come out badly. In the words of the Fed report (emphasis added):

“Respondents indicated that demand for loans from both businesses and households continued to weaken for nearly all types of loans over the survey period, an exception being demand for prime mortgages… In response to the special questions on the outlook for loan quality, a significant majority of banks reported that credit quality for all types of loans is likely to deteriorate over the course of the year if the economy progresses according to consensus forecasts.”

3) Mark Thoma of the Economist’s View blog calls attention to a paper from the Federal Reserve Bank of San Francisco that analyzes the likely impact of historically high household debt on the eventual recovery. The most revealing stat, to quote the paper (again, my emphasis): “U.S. household leverage, as measured by the ratio of debt to personal disposable income, increased modestly from 55 percent in 1960 to 65 percent by the mid-1980s. Then, over the next two decades, leverage proceeded to more than double, reaching an all-time high of 133 percent in 2007.“

4) Goldman Sachs economist Ed McKelvey measures our current situation against five standard benchmarks of recovery from a recession, and finds the outlook grim on four of those counts.

5) Agricultural lending is now hitting the skids, too, as farmers get to the time of year when bridge loans are most critical to their operations. Lauren Etter writes in today’s WSJ: “Deepening slumps in the livestock, dairy and ethanol industries have contributed to mounting troubles for rural lenders…. Lending woes are an about-face for the agriculture sector, which has remained a relative bright spot in the economy. Over the past two years, high grain prices and rising global demand for food and the biofuel ethanol lifted farmers’ profits and helped rural businesses and banks. Debt-to-asset ratios for farmers are still at all-time lows.”