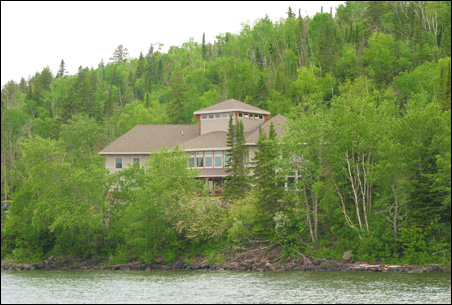 MinnPost photo by Catherine Conlan
The new interpretive center at Grand Portage, which opened in 2007, provides an excellent history of the fur trade in the area.

THUNDER BAY, Ontario — On the first leg of our trip circling Lake Superior, there were more surprises than I bargained for. After a boiling weekend, the morning was cool, damp and cloudy. During our planning session, I apparently missed the fact that we were stopping at Grand Portage National Monument. And once we got to Thunder Bay to file this dispatch, it was almost impossible to find public wi-fi.

Up the North Shore and over the Canadian border, the land changes dramatically. Highway 61 veers away from the lake — I didn’t know we would lose it so soon! — and climbs huge shoulders of stone that seem to loom out of nowhere, and suddenly you’re barreling down the other side of a palisade through the trees without knowing you had risen above the lake in the first place.

The Grand Portage monument opened a new interpretive center in 2007, and it is a jewel.  As a relative newcomer to Minnesota, I was a little fuzzy on the details of the fur trade and its role in bringing trade to the area. But even the Minnesota-born in my family learned a lot at the center, which is just big enough to tell you what you need to know, and small enough to be manageable with children. 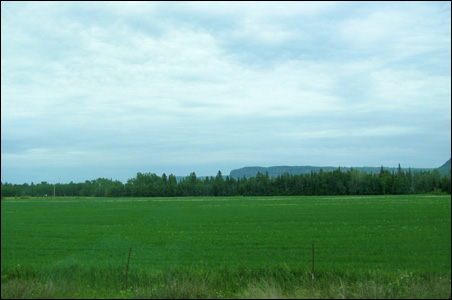 MinnPost photo by Catherine Conlan
Cliffs rise behind farm fields on the road to Thunder Bay.

On the other side of the border, the road to Thunder Bay winds through a valley, again out of sight of the lake, with the huge bluffs far on either side. Suddenly there are no towns, or tourist stops, and few houses.

The distance between Grand Portage and Thunder Bay spans miles and years. On this side of the lake, work stretches from native trappers and voyageurs to fishing villages to paper-mill workers and railroad workers. 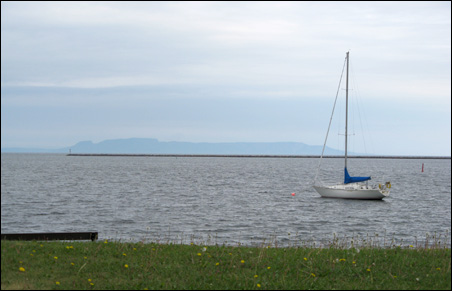 MinnPost photo by Catherine Conlan
Nana Bijou, or the Sleeping Giant, rises behind a sailboat at Thunder Bay, Ontario.