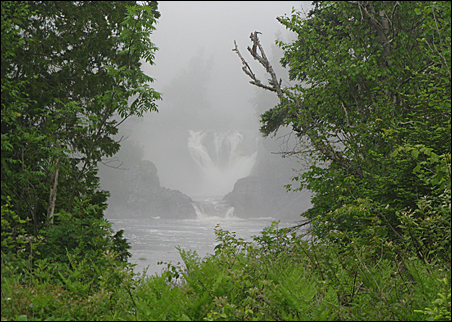 AGAWA BAY, Ontario — Lake Superior welcomed us back fiercely. We were engulfed in fog in Wawa as we turned out of the interior back to the lakeshore. My photo of the Magpie High Falls shows our greeting. We stopped later at Katharine Bay to see the beautiful rocks there (lots of wolf prints, as well as more inuksuit). And it was there the lake took its first casualty — my camera, which Matt dropped when he slipped on an algae-covered rock.

It was then of course, that we arrived at the most gorgeous campsite. Write this down: If you ever go to Agawa Bay, stay in campsite 253. It had to have been a half-acre. We were 50 feet from the lake on a sandy beach that changed to smooth pebbles on the waterline. We had been talking about our previous campsites: The first had been perfect except for the biting black flies. The second had been perfect except for the rain. This one? The waves beat on the shore all night long, and while most of the campsites up and down the shore were occupied, we felt like we had the whole place to ourselves.

The next day we went back to Agawa Rock to see the pictographs there. The guidebooks, the interpretive center and all the signs there are covered with bilingual warnings about the DEATH and INJURIES that will occur when you climb down the unimproved gorge to view the pictographs. While harrowing, I didn’t take them very seriously — until I was standing next to Lake Superior under a towering cliff and watching my children creep out on a narrow ridge while holding onto a chain so they didn’t fall in. 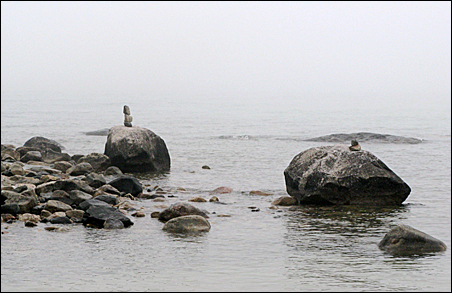 We carefully made it out to see the hand-drawn pictographs of people in canoes and a moose and the Great Lynx spirit of Lake Superior. The kids were entranced. Once we had made it off the ridge back to relative safety — a rock with a larger margin of error between safety and drowning — 6-year-old Maia said, “That was TOTALLY worth it.”  John, 10, added his thoughts: “I will bring my children here. AND my grandchildren. If I have them.”

And that, friends, is what travel is all about.