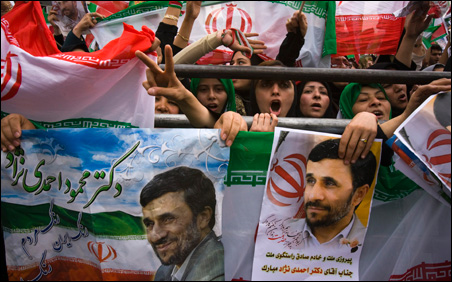 REUTERS/Caren Firouz
Supporters of Iranian President Mahmoud Ahmadinejad during a victory celebration in central Tehran over the weekend.

Iran’s disputed election was a puzzle to the outside world even before the government in Tehran virtually shut down communication over the weekend, isolating angry protestors who insist the landslide victory for incumbent president Mahmoud Ahmadinejad was rigged.

The one clear signal is that Iran’s controlling powers feel threatened by forces inside and outside their country — including President Obama’s invitation to more engagement between Washington and Tehran.

I asked Professor William Beeman to help make sense of the intriguing developments. He chairs the University of Minnesota’s Anthropology Department and he has written several books about Iran, most recently, “The Great Satan vs. the Mad Mullahs” published in paperback last year by the University of Chicago Press.

First, an update on this morning’s post-election news:

In a stunning turnaround by the country’s most powerful figure, Iran’s supreme leader ordered an investigation into allegations of election fraud, the Associated Press reported.

Who’s in charge?
Americans can be forgiven some confusion about this turbulent election. The true significance is more complex than many outsiders realize.

First of all, Ahmadinejad does not control Iran. No president could under a power structure that is as intricate as Persian design. The president has little authority over foreign affairs, the military and Iran’s nuclear development. 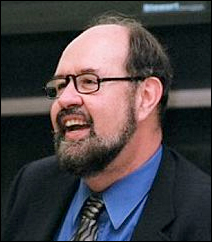 “This is what makes Iran so absolutely fascinating,” said Beeman, who had expected to be in Tehran today. He was invited to give talks there at three universities. Because visas were delayed as the election approached, though, his trip had to be postponed.

Khamenei, the supreme leader, and dozens of theocrats work behind the scenes to control every important aspect of Iranian policy. That reality wouldn’t change regardless of who won the election.

Iran’s power structures are so diffuse that even Khamenei “doesn’t have a free hand,” Beeman said. More than 100 power brokers can weigh in on decisions before a policy finally “comes down from the government, and you don’t know where it came from,” he said.

Extreme fear of change, Obama
So, if the election was rigged it likely happened with the approval of dozens of influential clerics. And the real challenge is to understand what could have motivated them to blatantly alter election results and risk not only the wrath of the youthful reform movement but also the integrity of Iran’s democratic institutions.

“These election results are very hard to believe,” Beeman said. “But if, in fact, they were manipulated, it is a severe departure from what was done in past elections. It would have to have been the result of extreme fear on their part of radical change that they couldn’t control.”

Even while personal liberties were sorely lacking in Iran, there was deep pride in a tradition of reasonably fair elections. Iranians often touted their process as superior to that in Egypt where elections are presumed to be phony.

“So to risk that reputation would require some extreme sense of danger,” Beeman said.

Obama poses that danger in his own way.

After he riveted the Muslim world with a major speech this month in Cairo, a pro-Western coalition won Lebanon’s elections. Many analysts credited Obama with making a difference there and predicted that Ahmadinejad could be vulnerable to the Obama effect.

For his part, Obama seemed to invite the comparison. Speaking from the White House Rose Garden on Iran’s election day, he said: “Ultimately, the election is for the Iranians to decide, but just as has been true in Lebanon, what can be true in Iran as well is that you’re seeing people looking at new possibilities.”

The youth vote
Americans know full well how potent the Obama effect can be with young voters. And young voters are one of the most serious internal threats to Iran’s existing regime.

More than half of Iran’s population was born after the 1979 Islamic Revolution, and millions of young people are frustrated. They chafe under conservative restrictions imposed by the regime that has been in power since the revolution. They also lack jobs and opportunities, something they blamed on Ahmadinejad.

During pre-election campaigns, young Iranians rallied for change. (Where have we heard that before?) They shook the country’s political landscape, campaigning via text message and other tactics Obama’s supporters had deployed to propel his stunning victory in U.S. elections last year.

As the youth vote rallied behind Mousavi, Iranian authorities grew increasing alarmed. Among other steps, they blocked access to Facebook three weeks before the election.

A related threat to the existing order came from rising demands for women’s rights. Mousavi championed this issue and pledged to disband the “morality police” who enforce standards of Islamic dress upon women in public.

Iran’s conservative leaders are wary about the growing power of women, Beeman said. But it’s hard to say how the issue affected the vote because many women favor modest dress and oppose liberal and western influences on their society.

The axis-of-dialogue threat
Also unsettling to the Iranian regime was the loss of a unifying force when George W. Bush left the Oval office. It had been easy to portray him and his axis-of-evil rhetoric as an insult and a threat to Iran.

Now comes Obama calling for more dialogue between Washington and Tehran. Demonizing him is far more difficult. And as a result, one of the regime’s most effective weapons is disabled: its ability to rally the nation for confrontation with the West.

Iran’s voters may be swayed by Obama’s conciliatory tones. But its leaders are not.

“They really believe that the United States and Israel are trying very hard to undermine their governmental structure and trying to foment a revolution, a soft revolution,” Beeman said.

The recent arrest, trial and conviction of Iranian-American journalist Roxana Saberi was one symptom of the paranoia that has gripped authorities in Iran, Beeman said.

And that paranoia is not unfounded. It was an open secret that Bush was spending huge sums to destabilize the Islamic Republic.

Although Obama offers a fresh start, Iran’s leaders are deeply suspicious of some of his top appointments, fearing that his administration is playing a game of good cop-bad cop with them.

“As a presidential candidate, then-Senator Clinton ran well to the right of Mr. Obama on Iran, even saying she would ‘totally obliterate’ Iran if it attacked Israel,” the Leveretts said.

“Since becoming secretary of state, Clinton has told a number of allies in Europe and the Persian Gulf that she is skeptical that diplomacy with Iran will prove fruitful and testified to Congress that negotiations are primarily useful to garner support for ‘crippling’ multilateral sanctions against Iran.”

Even more disturbing to the Iranians is Obama’s choice of Middle East expert Dennis Ross as the point person for Iran policy at the State Department.

“Mr. Ross has long been an advocate of what he describes as an ‘engagement with pressure’ strategy toward Tehran, meaning that the United States should project a willingness to negotiate with Iran largely to elicit broader regional and international support for intensifying economic pressure on the Islamic Republic,” they said.

Should that pressure fail and should Iran continue to expand its nuclear fuel program, Ross has said military strikes against Iran’s nuclear targets would be necessary, they said.

While agreeing with the Leveretts’ analysis, Beeman doesn’t doubt Obama’s sincerity in calling for dialogue. “The United States still is committed to pursuing talks with Iran and relations with Iran because it’s within the United States’ interest to do this,” he said.

The question now is whether post-election Tehran will feel too threatened to engage.

At a minimum, this eruption of suspicion and violence in Iran is going to cost Obama precious time he needed to pursue his strategy of engagement with a country that holds enormous influence over the outcomes of the conflicts in Iraq and Afghanistan, Trita Parsi told Reuters.

Parsi, president and founder of the National Iranian American Council, appeared with Beeman in Minneapolis last year at a forum organized by U.S. Rep. Keith Ellison.

“Obama is already trying to win time within Washington and from Washington’s allies,” Parsi said. “There are already pressures from Congress, from pro-Israeli corners, from Israel itself, from some of the Persian Gulf Arab states, for a strict timeline for these efforts. Their patience for how long Obama can pursue this is strictly limited.”

Time to wait and see
Now, as post-election violence consumes Iran, there are many reasons for the United States to stand back and wait.

First, there is the possibility that Ahmadinejad actually won the election by some margin.

In the West, he is dismissed as something of a buffoon — denying the Holocaust, crudely bashing the West and insisting that there are no homosexuals in Iran.

But like everything in Iran, Ahmadinejad’s image at home is more complex.

Expectations of his defeat were built on shaky ground, Beeman said, beginning with the media coverage of the campaigns.

Foreign journalists typically focus on Iran’s upper classes and connect with those who tweet, blog and frequent Facebook. But that is not by any means a cross section of the Iranian electorate. It leaves out Ahmadinejad’s base: the poor and the rural residents who are less connected with the world and less inclined to talk with strangers.

Within his more pious and conservative constituency, Ahmadinejad is respected as a straight arrow, the rare politician who abhors corruption and even declines to take the salary that comes with the presidential office. Over the years, Ahmadinejad and Iran’s higher powers have differed, but he now stands as the leader who could salvage and solidify the Islamic Republic’s control. In that regard, many Iranians see him as the man for this troubled time.

“Polling and reporting did not take into account huge sectors of the population that who were supporting Ahmadinejad,” Beeman said.

It’s no wonder Vice President Joe Biden said Sunday on NBC’s “Meet the Press”: “I think we have to wait and see…. we don’t have enough facts to note — to make a firm judgment.”