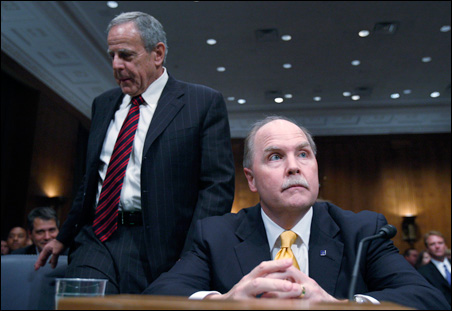 WASHINGTON, D.C. – Members of the Senate Commerce Committee pummeled the heads of GM and Chrysler today at a hearing on how the auto giants’ restructuring has affected dealerships around the country.

Sen. Amy Klobuchar, who sits on the panel, opened her comments by expressing puzzlement at how dealers in Minnesota, who had been doing relatively well, had still been asked to close.

“Walser Buick Pontiac for four out of the past five years has been number two in sales for all Buick Pontiac GMC dealers in Minnesota,” Klobuchar said. “Fury Dodge Chrysler set an 85-year record for sales in January with 103 new cars sold. They beat the record again in May with 113 new cars sales.” Still, Klobuchar said, these dealers “received termination notices.”

Klobuchar said that Minnesota’s auto dealers, about 11 of whom were seated in the second and third rows of the hearing room, wanted answers to how the decisions to discontinue their franchises were made.

For emphasis, Klobuchar waved a stack of 1,200 letters her office had received in protest of Fury Chrysler Dodge in Lake Elmo being let go.

“You know when mistakes have been made and acknowledged by the auto industry in the past, [that] would lead one to believe that there could be mistakes made in decisions about which auto dealerships should be terminated,” Klobuchar said.

“We would like to see fairness injected into this process.”