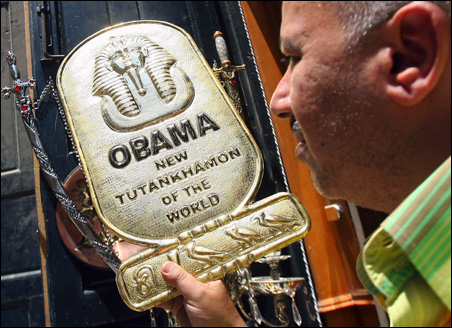 You would need to have been sleeping in a cave since Sept. 10, 2001, not to appreciate the significance of the speech President Obama is set to give in Cairo on Thursday.

The long-awaited address is billed as Obama’s formal opening handshake with the Muslim world. That’s a big world — more than 1 billion people, most of them living outside the Middle East in places like Indonesia, Pakistan and even the United States.

But it is tension in the Middle East that has defined the dynamic between the United States and Muslims in recent years. And whether you are a worshipper at a mosque in Minneapolis or a soldier in the Minnesota National Guard, you know the stakes are high for everyone as Obama sets the nation’s new course in that region and with Muslims around the world.

MinnPost asked Ragui Assaad to help assess the expectations Obama faces as he steps to the lectern in Cairo.

I met Assaad in Cairo in 2005 while I was there reporting a story about Egypt’s frustrated youth and their resentment toward America. He was on leave from his post as a professor of international planning and public affairs at the University of Minnesota’s Humphrey Institute. Now he is back in Minnesota after three years in Cairo working as the Population Council’s regional director for West Asia and North Africa.

MinnPost: The venue chosen for this speech is Cairo University, which has a history of anti-government protests. It also is home to many followers of the Islamic opposition movement known as the Muslim Brotherhood. Would people in that part of the world see any particular symbolism in this choice?

Raqui Assaad: No. You are right that it has been a center of student activism, but in the early 1970s it was leftist students who were active against then-President (Anwar) Sadat. Later the Islamists became more active. But I don’t think Cairo University is more Islamist than any other university in Egypt.

More relevant is that it is the most important seat of learning in Egypt. So the fact that he is giving his speech at Cairo University means he is trying to reach the intelligentsia.

In any case, the government is going to keep most of the activist students away from the university during the speech.

MP: At a minimum, Obama is expected to set a new tone for America’s relations with that part of the world. How significant is that?

RA: It is very significant. Expectations are very high that he will make a dramatic change in U.S. policy. It’s going to be very hard to meet the expectations that have been built up as a result of his momentous election. So the question is how he can show that there has been a dramatic change from the past while at the same time not raising expectations too much.

MP: The president also is expected to address anti-American sentiment. But that sentiment is useful to some governments in the region. Essentially it provides an escape valve for frustration over problems at home such as Egypt’s authoritarian rule. Do we have hidden agendas here in terms of who expects what?

RA: The moderate Arab regimes — Egypt, Saudi Arabia and Jordan — really are very keen to see President Obama’s agenda in the Middle East succeed for two reasons. One is that they are very worried about Iran — its growing power and its threat to regional stability and to these regimes themselves.  Second, they would like to see a resolution of the Israeli-Palestinian conflict because that destabilizes their own governments.

At the same time there are going to be parties in the region — possibly the Syrians, Hezbollah in Lebanon and the Iranians — who don’t necessarily want to see him succeed in making dramatic change because they are getting a lot of popular support as a result of the frustrations in the region.

So you have to look at agendas differently depending on which governments you are talking about.

MP: What main issues does Obama need to address?

RA: Right now the main issue is for him to show these changes in U.S. policy:

• First, in Iraq, that the United States really will pull out and leave behind a relatively stable Iraq.

• Second, that the United States will be an honest broker in the Israeli-Palestinian conflict and will not hesitate to put pressure on Israel to compromise to reach a settlement with the Palestinians.

• Third, that the United States, while it will talk to Iran, will be firm and tough so that Iran does not continue its destabilizing efforts in parts of the region.

MP: On the Israeli-Palestinian conflict, Obama is likely to reiterate his call for establishing a Palestinian state but also ask Arab nations to recognize Israel’s existence. Will the audience be satisfied with that much or will they want more?

RA: What they want to hear is a more even-handed and balanced approach to the conflict. With the Bush administration, it was ‘Whatever Israel wants, Israel gets,’ and there was a feeling that there was absolutely no neutrality in that relationship. The United States was seen not as a mediator but as a backer of Israel.

I don’t think they are going to be looking for specific details because they know those have to be negotiated. What they will be looking for is an open and honest call for a freeze on settlements — which President Obama already has made a couple of times — and for a Palestinian state to be established alongside Israel. At the same time, they will look for acceptance of the Arab Peace Initiative which has said that the Arab states will normalize relationships with Israel if Israel returns to its 1948 borders and allows the formation of a Palestinian state within the Occupied Territories.

MP: Will the audience believe anything Obama says in this regard given that Israeli officials are signaling in advance of the speech that they are not willing to go along with some of his points?

RA: I think they will hear his words and then they will look for action that follows to put pressure on Israel to go along with these words. So the speech is not going to be the end of it all.

MP: Your work in the region was focused on broad underlying problems that give rise to unrest and resentment such as the acute lack of jobs for young people. Can Obama propose policy initiatives that produce tangible change in those areas?

RA: I don’t think that people are really looking for policy initiatives directed at Middle East economies in particular. They do however realize that the state of the world economy very much impacts the economies of the region. The economic crisis that happened this past year has affected them very directly. So, to the extent that he can solve the U.S. economic problems — and through that the world economic problems — that is going to improve the situation for young people who were already having trouble even in boom times. With this crisis they are being hit with a double whammy.

MP: Obama’s deep agenda in the region reportedly is to reconcile modernity and the Islamic world. The Wall Street Journal and many others are reporting White House signals that Obama will confront claims of Islamic radicals that there is an inherent conflict between modernity and Islam. In that regard, we can expect to hear Obama pay homage to a golden age of Muslim culture when scholars in the Middle East led advances in mathematics, science and literature. Is this a significant topic for him to address?

But ultimately it’s really about U.S. policy in the region that has people worried as opposed to this kind of vague issue of enmity between Islam and the West. This thesis of the clash of civilization is much more popular in the West than it is in the East. I don’t think people in the East really buy it.

MP: Still, is there a risk that some people in the region would see any proposed “reconciliation” bid as akin to former President Bush’s efforts to push democracy in the region? Could it be seen as another way of looking down on Muslims?

RA: I’m not sure President Obama’s agenda is to reconcile Islam and modernity. I actually don’t understand what that means or what that looks like. There is no such thing as Islam. There is Islamic culture and civilization, Islam as a religion, Islam as a people: Muslims around the world. I’m not sure what he would be trying to reconcile with modernity because Islam is a construct that does not exist in people’s mind as one thing.

The idea here is that you want to demonstrate that you can have democracy in Muslim countries, you can have the rule of law, you can have respect for human rights, etc. That’s a different thing than saying you can reconcile Islam with modernity, which is a shorthand that doesn’t mean too much to people.

MP: How important is it for this president to carry on the call for democracy and human rights in the region?

RA: Condoleezza Rice came to the region three or four years ago and said United States’ policy has been on the wrong footing for 60 years and the Bush administration is going to come and fix that. She said we have focused on stability at the expense of democracy and human rights for too long, and now we are going to push democratization come what may. Of course nothing happened. It was just a speech that was never followed by any attempt to do something. So I’m wondering to what extent President Obama is going to approach this issue of democratization and human rights or whether he is going to avoid it altogether.

MP: When I saw you there in 2005, Egypt was celebrating relatively open elections, and there was clear enthusiasm for democracy. What’s happened to push that issue to the background?

RA: Since 2005 there has been a big reversal. The government cracked down more, reduced the democratic space available. And there was a sense that the United States was not going to pressure them to do anymore because of what happened in the Palestinian Territories with Hamas winning the elections (in 2006). So the United States lost it s taste for democratization in the region after 2005.

MP: Is it safe to assume that people in the region very much like Obama?

RA: Most people did not believe it was possible for the United States to elect a black man. Those who thought he might be elected also thought he might be assassinated because of that caricature of racism in the United States. So, it is very refreshing for the region to see a man of African origin at the helm in the United States. There is a tremendous amount of positive feeling because of that. So now the question is are the expectations way too high, so high that they are bound to be frustrated? And is he going to be able to deliver on some of those expectations?

Sharon Schmickle writes about international affairs, science and other topics.