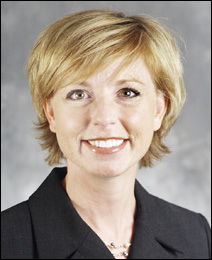 Laura Brod, a three-term state representative from New Prague, is among the more intriguing Republicans in “exploration” mode to run for Minnesota governor.

There’s a bit of Tim Pawlenty in Brod, who has the ability to put a smile on her conservative message. Sometimes, she even echoes Pawlenty’s favorite messages.

Like the governor — and most other Republicans these days — Brod is pro-life, opposed to gay marriage, a supporter of Second Amendment rights and opposed to increases in taxes.

But expect Brod, unlike the governor, to come out with some very specific reform proposals when she does decide to officially announce she’s a candidate. She wants a “fundamental reform” of Minnesota’s tax system, saying the current one is too volatile. She promises specifics on just what reforms she would push for in the system.

She also believes that the state’s health care system for the poorest also needs reform, by aligning it with private insurers.

Gender, of course, would separate her from most of the Republicans likely to express interest in the crowded race for her party’s nomination.

To date, neither major party has ever gone into November with a woman as the party’s nominee for governor. That has been a more troublesome reality among DFL activists than Republicans, but Brod said there would be “no irony” if it was the Republicans who would be first to come forward with a female candidate for governor.

“We’ve had a number of strong women in constitutional offices,” said Brod, who is viewed as media-savvy for her use of social media, such as Twitter, to communicate with the public. But she is also quick to say that “it’s the message, not the gender,” that will matter most to Minnesotans.

“I think if folks are interested in a pragmatic, Main Street approach to government, they would be interested in my message if I decide to run,” she said.

What of the “No New Taxes” pledge that seemed to limit Pawlenty’s options?

“The pledge will be brought up at some point,” Brod said. “I think we need to talk about the pledge in terms of why it’s a bad idea to raise taxes.”