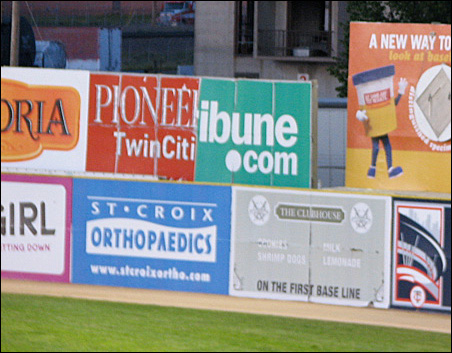 Are the two daily newspapers now sharing marketing and advertising at Midway Stadium? Or did the St. Paul Saints get hold of a secret memo about a pending newspaper merger?

A sign on the right field fence in the Saints stadium in St. Paul says:

Observers have wondered for months if the two papers might somehow merge to stop the financial bleeding, so the outfield billboard sign intrigued me on several recent visits to the stadium to watch my son’s Hill-Murray team in the high school baseball sectional tournament.

I figured the Saints might be messing with us — Veeck-like — as is the franchise M.O.  Like last month’s Re-Count Bobbleheads with a Franken head on one side and a Coleman head on the other. Or 2007’s Michael Vick doggy chew toy.

Alas, the facts are getting in the way of a good story, once again.

A check with Annie Huidekoper, the Saints’ vice president of  community partnerships and  customer service, shows the billboard isn’t related to newspaper troubles at all.

“It is an ironic image out there,” Huidekoper said. “But the Pioneer Press had that billboard for several years, and recently the Star Tribune had it, and now we’re just preparing it for a new sponsor, Hirshfield’s,” she said.

So they’re stripping down the board for the new paint store ad, and parts of the old ads are still visible.

She said it’s like seeing a mannequin with its top off, waiting for the next fashion.

The Star Tribune is still a partner with the Saints and the Pioneer “is still a good friend” to the team, she said, so no disrespect was intended.

It does look kind of funny, though.