WASHINGTON, D.C. — Somewhere, the late William C. Norris is thumbing his nose at Wall Street and saying “I told you so.”

Actually, Norris, the founder of Control Data Corp., and one of the pioneers of the computer industry, undoubtedly would have used much stronger language after reading an article about corporate social responsibility in the May 29 business section of The New York Times, if only St. Peter allowed it.

In the article, headlined, “A Promise to Be Ethical In an Era of Temptation,” reporter Leslie Wayne wrote that graduates of Harvard and other top business schools no longer ascribe to Gordon Gekko’s claim that “greed is good,” but believe the goal of a business manager is to serve the greater good.

“In the post-Enron and post-Madoff era, the issue of ethics and corporate social responsibility has taken on greater urgency among students about to graduate,” Wayne wrote. “They are far more concerned about how corporations affect the community, the lives of its workers and the environment.”

Well, pardon me, but isn’t that just what Bill Norris was preaching to skeptical Wall Street analysts and corporate America more than 25 years ago as he masterminded Control Data’s unique corporate strategy of addressing society’s unmet needs as business opportunities?

Norris, who retired as chairman and CEO of Control Data in 1986 and died in 2006 at age 95, was often ridiculed as a misguided visionary who bet his company’s future on “foo-foo social projects” and was more interested in solving societal ills than generating profits. Fortune magazine once labeled him “a business genius who unfortunately thinks he’s a social philosopher,” while Inc. magazine called him an “eccentric corporate do-gooder.” One Wall Street analyst called him “the Ralph Nader of the computer industry.”

Doing well and doing good
Nevertheless, Norris proved his company could do well and do good at the same time as the Minneapolis-based firm grew into a $5 billion worldwide computer giant with more than 60,000 employees in the early 1980’s. Norris’s strategy of pursuing “unmet societal needs” launched dozens of ventures that sought to use computer technology to rehabilitate decaying inner cities and revitalize depressed rural areas, improve education and healthcare, reform the penal system, produce cleaner, less expensive energy, promote job creation through innovation, and help its employees improve their lives.

I was privileged to work for Norris from 1982-89 when he headed Control Data, and later  the non-profit William C. Norris Institute, as a Washington-based aide who traveled the world with him. Mr. Norris didn’t suffer fools — or people who didn’t share his vision of corporate America — gladly. I don’t know how many times I heard him say, “Most of those Wall Street analysts don’t know their butts from third base about our company.” Only he didn’t say “butts.” 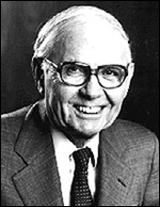 Norris explained his view of the business community’s responsibility to society in his 1983 book, “New Frontiers for Business Leadership,” even as Reagan era deregulation opened the door to a decade of unfettered capitalism that helped set the stage for the nation’s present economic crisis, the worst since the Great Depression.

Corporations, Norris said, “must take the initiative and provide the leadership in planning, managing and implementing programs designed to meet society’s needs and turn them into business opportunities. … Business must cooperate with government, labor unions, universities, organized religion, and other influential segments of society. [And] there should be appropriate sharing of costs between business and government.”

Norris summed up his disgust with Wall Street’s fixation on short-term profits in an interview with The Times of London in 1985, even as Control Data, like other U.S. computer companies, was struggling with financial problems that left it $568 million in the red that year.

“Unless we take a longer view,” he said, “capitalism is going to change and we’re not going to like it. If we let society deteriorate and violence continue to grow, if we let the cities decay and rural poverty grow, soon we’ll have two societies. Then you’ve got instability, and capitalism can’t survive in an unstable environment.”

Unfortunately, by the late 1980’s, Control Data had lost its competitive edge as the market turned from massive mainframes and supercomputers to personal computers, and its data storage and data services businesses were decimated by foreign competition. By 1992, it was split it into two companies, an information services business called Ceridian and a computer products business called Control Data Systems, with only $1.2 billion in annual revenues and 10,500 employees. By the turn of the century, the name Control Data disappeared when Control Data Systems was acquired by a British company.

‘Social agenda’
But Norris remained unapologetic for pursuing his “social agenda.” Pointing out that only about 7 percent of Control Data’s revenues were devoted to “so-called social initiatives,” he said in 1997 that they “were just a convenient red herring for the securities people to bring up. The thing was that we were unable to move quickly enough in switching from manufacturing computers to providing computer services.”

But he conceded that the corporations can’t solve the nation’s social problems by themselves. “I know now that with the focus on short-term earnings growth, a publicly traded company can’t take the lead in the kind of long-term efforts that are needed to affect social change. Companies can play a major role in them, but they need a non-profit partner to provide an umbrella for the collaborative long-term development and transfer of new technologies that create good new jobs and meet other social needs.”

In 1990, Norris was instrumental in bringing Soviet President Gorbachev to Minnesota, where he met with Gov. Rudy Perpich and Midwestern business executives after his summit meeting with President George H. W. Bush in Washington.

Nineteen years later, on June 6, 2009, I read a Reuters report about Prime Minister Vladimir Putin castigating a Russian business tycoon for closing down three factories in the hard-pressed city of Pikalyovo on the eve of Russia’s annual economic summit in St. Petersburg. Putin angrily asked the tycoon, “Where is the social responsibility of business?”

I can almost hear Bill Norris’s gruff reaction: “Even the damn Communists understand that business has a responsibility to address the unmet needs of society.”

As usual, Bill Norris had the last laugh.

Albert Eisele is editor-at-large of The Hill, a newspaper that covers Congress, and a former executive of Control Data Corp.