It seemed like a big production, with about 20 news photographers, videographers and reporters gathered outside the still-unmoved-into office of Sen.-elect Al Franken on the third floor of the Hart Senate Office Building. A full hour before blastoff, the camera types jockeyed for the best position in the narrow corridor.

Word was out among the nation’s media corps that the placing of Franken’s name on the wall beside the glass doors was set for 10:30 a.m., Washington time.

Curiosity seekers walked by or waited with the media horde.

The anticipation was high. 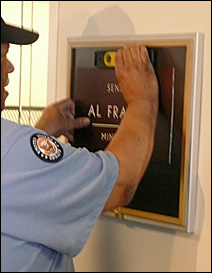 Then, at exactly 10:30, a man in a Capitol employee’s uniform motored up to the office doors in a handicapped-accessible cart. In the front of the cart sat a basket. Inside the basket was Al Franken’s office name plaque.

The man, James Pogue, a longtime worker, without a word, a wave, a smile or a grunt, took the thin, faux-wood sign from the basket, stood and stepped to the blank board outside the office. He affixed the name tag to its frame. He swiped and pushed it with his hands to ensure it would stick … for at least five-and-a-half years.

Mr. Pogue’s work was completed within about 30 seconds.

Silently, he plopped back into his cart and drove off down the corridor.

“Wait, it’s got to be more than that,” a photographer muttered.

Nope, that was the first show of the day.

He’ll be sworn in Tuesday at 12:15 p.m., Washington time. Then, Franken and his staff will be able to move into the office that was once used by Norm Coleman. Today, carts of computer screens, mouse pads and keyboards filled the entry way behind the glass doors. Tomorrow, the phones should be working in the space beyond the name tag.

Check back throughout the day for more reports on Franken’s day on Capitol Hill.