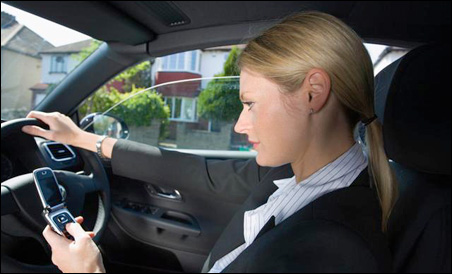 CORBIS
A Minnesota safety official says one in four crashes can be blamed on driver distraction.

Distracted driving has been getting a lot of national media attention in recent weeks, largely stemming from New York Times reporter Matt Richtel’s series on the dangerous combination of cell phones, texting and driving.

Columnists and commentators across the country seem to be chiming in daily in response, some shamefully admitting to their own distracted-driving behavior and others calling for a federal ban on any cell phone use while driving.

All of this is helping to create a national dialogue on the issue that some believe is long overdue.

Here in Minnesota, distracted driving long has been viewed as a danger by public safety officials but has not seemed a high-priority issue for many in the media or at the Capitol.

On Friday, former car dealership king Denny Hecker admitted to the judge that he had been texting and checking his email on his BlackBerry last December when he crashed his SUV into a utility pole near his home.

Hecker’s admission subjects him to a new state law, in effect since last August, that makes it a misdemeanor to text-message and drive at the same time. It’s the state’s one and only legislative measure so far that limits all drivers’ use of digital media behind the wheel.

It is not clear whether the new attention to distracted-driving issues will lead to further reforms and stiffer legislation in Minnesota and elsewhere.

But one sign that the issue may be gaining local political momentum comes from Gov. Tim Pawlenty, who has declared this Saturday Distraction-free Driving Day.

“Eighty percent of all crashes occur within three seconds of a driver distraction event, and many fatalities could be avoided by simply following safe driving practices such as using hands-free cell phones and avoiding texting, e-mailing, accessing the Web, tuning radios and stereos, and looking at maps while driving.”

But, as Pawlenty’s proclamation points out, the problem of distracted driving is not limited to texting, web surfing or talking on the phone. There are many things we do as drivers that take our attention away longer than the three dangerous seconds when most crashes occur.

There’s the perennial distraction of chatting or arguing with other passengers … or searching for the right song on the radio. And the 180-degree head-turn to grab something from the back seat.

The director of the state’s Office of Traffic Safety, Cheri Marti, calls the statistics “conservative” and says distracted- driving statistics generally are under-reported, because they depend on the drivers admitting to the behavior.

Still, Marti estimates that one of every four traffic crashes in Minnesota is related to distraction, making it “the leading cause of crashes in the state.”

“We have an epidemic of multitasking on the road,” says Marti. “Drivers are overestimating their abilities and there’s a dangerous overconfidence. Driving itself is a multitasking activity, with all you have to pay attention to — your mirrors, your brakes, signage, watching for pedestrians, bicyclists, other vehicles and the unexpected. Anything added to that takes your focus off the road.”

Given the potential deadliness of distracted driving, which everyone seems to agree is getting worse as digital multitasking becomes more commonplace, it’s surprising that, lawmakers nationally are doing next to nothing to curb distracted driving.

Minnesota is slightly more proactive than most states, but that’s not saying much.

Just 14 states (including Minnesota) have laws prohibiting texting and surfing the web while driving. Minnesota’s law allows the use of cell phones — you can still talk and drive.

Only five states have a “hands-free”-only law for cell phone use in cars (Minnesota isn’t one of them).

The lone Minnesota statute related to outlawing cell phone use while driving pertains only to teens and new drivers when they’re in the permit phase. After they pass that probationary period, though, they’re free to chat and drive like the rest of us.

This frustrates such public safety advocates as Minnesotans for Safe Driving, which says that Minnesota is slow to change its ways when it comes to rules of the road. (Remember, back in 2005, Minnesota was among the last three states in the nation to lower the state’s legal blood alcohol level from 0.10 to 0.08.)

Right now, if a driver is texting or grabbing something from the back seat and ends up killing somebody, the maximum penalty he or she can be charged with is a misdemeanor (up to 90 days in jail and a fine of $700 to $1,000).

Over the last couple of years, Johnson’s group has been pushing a bill that would make distracted driving a gross misdemeanor (up to a year in jail and $3,000 fine) in the case of a fatality. It also would give prosecutors the option to charge the crime as a felony.

By contrast, if you kill somebody while driving drunk, you could face up to 10 years in prison and a $20,000 fine.

“People are just as devastated when a loved one dies in a non-alcohol-related crash,” says Johnson. “And it’s even more difficult for the families because the penalties are so much less. A gross misdemeanor penalty gives more credence to the seriousness of the crime. Of course, people don’t intentionally try to kill somebody while driving, but people have to learn to focus on driving and not everything else.”

How dangerous is driving while texting, compared with driving after drinking?  Check out this Car and Driver video, which compares reaction times of texting drivers and those who have been drinking. The results show that texting can be more dangerous in some cases.

Johnson says the bill has never gained much traction at the Legislature. Last session, it never made it out of committee. Johnson says the bill will be back next year. And Marti of the state’s Office of Traffic Safety says that some lawmakers already have expressed interest in an informational hearing next session on the issue of distracted driving.

As a member of the Pawlenty administration, Marti would not say unequivocally if she would support tougher penalties for distracted driving.

“Having stronger laws is important,” says Marti. “We know strong laws change behavior. That’s the formula that works. I’m not here to lobby. As people start to build their awareness of the issue, it will bubble up to the legislators.”

Commemorative walk on Saturday
Gov. Tim Pawlenty's declaration of Distraction-free Driving Day on Saturday coincides with a 5K walk in Eden Prairie designed to draw attention to the dangers of distracted driving.

The walk commemorates Shreya Dixit, a 19-year-old Eden Prairie resident who was killed in a 2007 distracted-driving crash.

Dixit was a passenger in the front seat, heading home to Minnesota from the University of Wisconsin-Madison with three other students. The driver of the car turned away from the wheel for just a few seconds to grab a napkin from the back seat. Her distraction caused the car to slam into a concrete pylon on I-94, killing Dixit. Everyone else in the car survived the accident.

Her parents, Vijay and Rekha Dixit, have channeled their grief into a campaign to end distracted driving. They created the Shreya Dixit Foundation. Through it, they sponsor an annual 5K walk (this is its second year) to raise funds for scholarships for inner-city school students to enroll in driver education classes. They also are raising money to provide schools with curricula that teaches students about the dangers of distracted driving.

"We would like everyone to be very responsible," says father Vijay Dixit. "That iPod, that cell call, that texting can wait. A 15-second wait won't kill you. But 15 seconds of distracted driving will."

Vijay and his wife were born in India and are Hindu. Saturday's Raksha walk honors their culture with a protection festival — a holiday in India where a sister ties a thread on her brother's hand and wishes for his protection and good will.

Dixit says each walker will receive a raksha banhan, a colorful wrist band from India used in the protection ceremony, and then he'll ask each walker to take a pledge:

"I will treat everyone driving next to me on the road as someone's son, daughter, sister, brother, wife, husband," says Dixit, reciting the pledge. "I pledge to keep my eyes on the road and not get distracted."

Dixit says his 27 year-old daughter, Neyha, will ask walkers to then tie the thread, the raksha banhan, to the person standing next to them as an expression of protecting each other's lives with distraction-free driving practices. —Marisa Helms