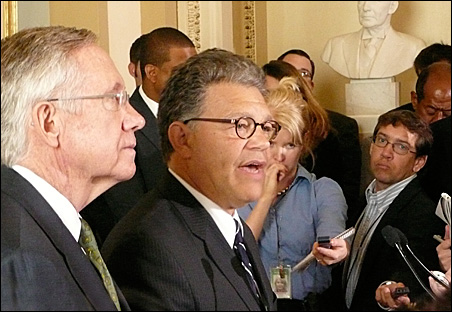 With all the cameras and excitement, all the spinning and smiling, “Cirque du Al” opened today under the biggest tent of all, the U.S. Capitol.

About 1 p.m., Democrat Standard Time here, a beaming Franken walked into a jumble of flashes and strobe lights. The clickclickclickclick of cameras sometimes drowned out the words of the powerful Reid and the still-unofficial Franken, the least senior of any member of Congress.

It was a stunning scene, one of those pinch-me moments long-awaited by Democrats and long feared by Republicans: somber Reid and serious Franken, side by side and triumphant, the leader with his 60th vote, Franken about to fill Norm Coleman’s seat and, indeed, Coleman’s former Hart Senate Office Building offices. It’s a virtual invasion and takeover.

A call for bipartisanship
For his part, Reid used Franken’s arrival in Washington and the marble halls of the Capitol to call for bipartisanship, a sort of counter-intuitive presentation in light of the most expensive Senate race in the nation and bitter post-election recount that has Republicans back home still smarting.

As if to stick it to those annoyed GOP faithful, Reid quoted former Republican Congressman Vin Weber of Minnesota — as powerful a lobbyist and kingmaker as there is in Washington.

Reid quoted Weber as saying about Franken, “When people find out that he’s a smart guy and is serious about issues and a hard worker, they will be very pleasantly surprised.”

He went on to address the anticipation around Franken’s arrival, confirmed by the 50 or so photographers — more, said a Senate Press Gallery official, than even Hillary Rodham Clinton commanded at her first media event as senator.

“Much has been made of the expectations of Al Franken joining the United States Senate,” Reid said. “I expect Al to work hard for the people of Minnesota, who have gone far too long without full representation. I expect him to help deliver the change this country demands as we work to strengthen our economy, ensure all Americans can access and afford quality health care, and make our country more energy independent. I am confident Senator-elect Franken will make a difference, but we will need more than just his presence to effectively address all of our nation’s challenges.”

Then, Reid said: “The challenges we face are not Democratic or Republican in nature. They are America’s challenges, and they are too great to be solved by partisanship.”

“Democrats aren’t looking at Senator Franken’s election as an opportunity to ram legislation through the Senate,” said Reid. “In turn, Senate Republicans must understand that Senator-elect Franken’s election does not abdicate them from the responsibility of governing. That is why we have and will continue to offer Senate Republicans a seat at any negotiating table. It is up to them to decide whether they will sit down and be the Party of No or sit down and work for the common good of the people. I would hope the Party of No is coming to an end.”

It was now Franken’s turn as this pre-swearing-in coronation. He reiterated a message he’s been delivering since the Minnesota Supreme Court upheld his election a mere week ago.

“A lot has been made of this number 60, but the number I’m focused on is No. 2,” Franken said. “I see myself as the second senator from the state of Minnesota.”

“I am going to work day and night to make sure that our kids have a great future and that America’s best days lay ahead,” he said. “I’m ready to get to work.”

It felt like a movie; it really did. The head of the U.S. Senate introducing the Hollywood star-writer to the national media corps. A curiosity could be felt hanging over the room, the city. For us in Minnesota, it is the end of Part I, or even Part II, for that matter, in this unconventional Franken saga.

For the rest of the nation, it is the beginning.

Name on the wall
Two-and-half hours earlier, Franken’s name plate was actually affixed to the wall outside of his Hart Senate Office Building. We wrote about this earlier today.

As Reid and Franken spoke in the Capitol, a group of new Franken hires were trying to set up their offices on the third floor of the Hart Senate Office Building. The Twin Cities’ light rail line should be as convenient as the teeny-weeny subway that connects Franken’s new Capitol work place to his new headquarters.

A tour of the offices Monday morning revealed lots of chairs, tons of cherry-wood filing cabinets, vacuumed blue rugs, countless cubicles … all waiting to be filled and active.

The phones, computers and conference room in SH 320 are Franken’s now. The daunting issues, too. From the look on Harry Reid’s face, everything is about to turn real serious. So, after these 48-hours of ceremony, paparazzi and shindigs, Cirque du Al will quickly move out of town.