Dr. Hochfeld, of Corvallis, Ore., should know. He recently produced a 48-minute video titled “Health, Money and Fear,” in which he asks doctors, hospital administrators, professors and ethicists across the country to frankly answer these questions about health care: “Why does it cost so much? What does it say about us? What can we do about it?” You can see chapters of the video at his website, OurAilingHealthcare.com, or in its entirety here.

One wouldn’t think that a bunch of talking heads could hold one’s attention for 48 minutes, but that’s just what occurs as doctors, administrators, ethicists and historians bluntly dissect how our system became the most expensive one in the world. Some blame themselves for being part of the problem.

Hochfeld and videographer Todd Trigsted also just released a six-minute video titled “Our Trillion-Dollar Health Care Factory,” and they’re at work on another video — about the troubling practices and expenses surrounding end-of-life care.

Doesn’t Hochfeld have his hands full in the emergency room? Yes and no. About two years ago he found his job was driving him “crazy” and “I needed to do something about it.” He wanted to explore questions that have bothered him in three decades of practicing family medicine and then emergency medicine.

Shifting from ER to videography
After a trip to Africa and comparing the shortage of health care there to the excesses here, he decided to go half time at his hospital job. He signed up for a videography class at a local college and read everything he could find on health policy. He knew whom he wanted to interview — from West Coast to East Coast. 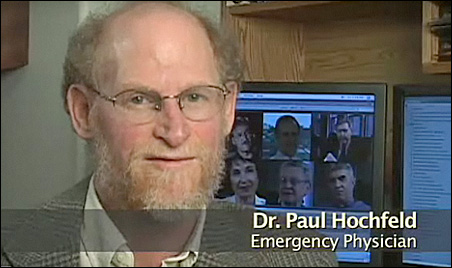 Dr. Paul Hochfeld in a scene from “Health, Money and Fear.”

Though Hochfeld thought he could just wing it with his two cameras, two lights, one class and a list of questions, his teacher (Trigsted) convinced him that he needed a specialist in videography for a polished portrayal of an important topic.

So, the men spent a week on the road filming a number of observers, including professors at Harvard Medical School, a former editor of the New England Journal of Medicine, a co-founder of Physicians for a National Health Program, the president of the Center for Studying Health System Change, the founder and editor-in-chief of Emergency Physician Monthly, and last but not least, the administrator of the hospital where Hochfeld works.

At one point in the video, Hochfeld describes U.S. health care as a “bizarre blend of the worst of capitalism and the worst of socialism; it isn’t a system at all.”

In a phone interview, he says he started out with a libertarian bias that maybe there weren’t “enough market forces” in health care and “people were too insulated from the costs.” But as he read more and listened to his subjects and spent hundreds of hours editing video, he became convinced that a single-payer government-run system is the only way to control costs.

“The point is, we’re all taking care of everybody anyway,” he says. “Sixty percent of our trillion-dollar health factory is funded by taxpayer money. Beyond that, private insurance premiums are inflated by 15 percent to 20 percent because of the cost-shifting that goes on [as a result of people who don’t have insurance or don’t pay their co-pays]. … My collection rate in the emergency room is probably 40 percent and that’s OK because my charges are inflated by 100 percent in order to compensate.”

Supply, demand and health care
The laws of supply and demand “just don’t work in health care,” he says. “As a supplier I have too much control over demand. If I want to increase demand, all I have to do is order more tests.”

Consumers also shoulder some of the responsibility for the state of U.S. health care, he says.

“[Insured] people demand lots and lots from the health care system because they don’t have to pay for it,” he says. “This is especially true toward the end of life. Medicare is paying for lots and lots of stuff, and patients don’t have to pay for any of it. If these 85-year-olds or 90-year-olds getting aortic valve replacements were told, ‘We can do this operation but it will cost you $150,000 that is not going to be there for your grandchildren’s college education,’ they probably wouldn’t consent.” 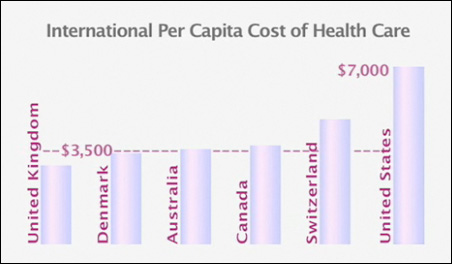 A scene from “Health, Money and Fear” depicting the international per capita cost of health care.

Frank and difficult discussions about outcomes need to take place between doctors, patients and their families, he says.

Speaking of supply and demand, Hochfeld would like to see more demand for his video in the mainstream. He is shopping it to film festivals, public broadcasting and other media. It’s not about the money (he spent $20,000 altogether), he says. It’s about spreading the message. He’ll send a free copy to anyone who asks, but will accept donations to help defray expenses.

“My goal is not to be famous or anything,” says Hochfeld, who still works eight shifts a month in a hospital emergency room in Oregon. “My goal is to get it in front of voters so they can understand and put pressure on our Congress people. … Accomplishing that really requires getting some media attention. I need to get the film in front of people who aren’t already part of the choir.”

Even though health reform is front and center this summer, he is skeptical about meaningful change occurring because “the health care industry is manipulating public policy and public opinion.” He’s worried that health reform will result in more government subsidies to the industry.

“I think we’re going to end up with health care reform that’s just like Medicare, Part D [the prescription program with the costly “doughnut hole”], and we may have to make lemonade out of it. What I mean by that is I don’t think it’s ever been quite as transparently obvious that our legislators are being bought off by the industry,” he says, in reference to recent analyses that lobbyists for the health-care industry have spent about $1.4 million per day on Capitol Hill this year.

Casey Selix, a news editor and staff writer at MinnPost.com, can be reached at cselix[at]minnpost[dot]com.