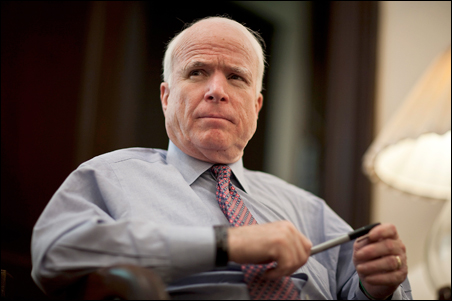 Some are holding town-hall forums with constituents and others are looking at language for a public plan that would get a loan from taxpayers and eventually be funded by premiums.

According to the Associated Press, draft language for a public plan was making the rounds Tuesday in the Senate Health, Education, Labor and Pensions Committee.

“An upfront loan from taxpayers would get the plan started, but it would have to pay its own way after a few months, relying on premiums collected from beneficiaries to stay solvent,” AP reported.

“The public plan would be offered alongside private coverage through new insurance purchasing pools called exchanges. The government option would have to follow the same consumer protection rules as private plans it competes with.”

Meanwhile, the Houston Chronicle (via Kaiser Health News) reports that Republican Sens. John McCain of Arizona, John Cornyn of Texas and Mitch McConnell of Kentucky told a forum at the University of Texas M.D. Anderson Cancer Center that a public plan is a “gateway to a single-payer system”:

“Prominent Houston health officials did give senators an earful about all that they felt was wrong with the current system, from the financial impact of illegal immigrant patients to insurance company greed to a doctor’s limits if the individual doesn’t take responsibility for his or her health. ‘The status quo is not an option,’ Dr. Kenneth Mattox, chief of staff at Ben Taub General Hospital, told the senators.”

Wal-Mart stuns business community
Among the jaw-dropping developments of the week is retailer Wal-Mart’s support of a federal mandate for large employers to provide health insurance to employees. The Wall Street Journal notes that Wal-Mart’s move is a “major break” from other large employers and could give impetus to health reform. But trade groups aren’t pleased with the discounter’s decision.

“The National Retail Federation, the industry’s main lobby, said it was ‘flabbergasted’ by Wal-Mart’s move. ‘We have been one of the foremost opponents to employer mandate,’ said Neil Trautwein, vice president with the Washington-based trade group. ‘We are surprised and disappointed by Wal-Mart’s choice to embrace an employer mandate in exchange for a promise of cost savings.’ “

But small businesses are divided when it comes to an employer mandate, McClatchy’s Washington bureau reports.

“With 68 million workers, small businesses will have big clout in deciding the fate of President Barack Obama’s effort to overhaul the health care system. In 1994, the small-business lobby, led by the National Federation of Independent Business, helped kill the Clinton administration’s plan, partly because it included an employer mandate.

“Since then, health costs have risen sharply. The proportion of small businesses that offer coverage also has fallen precipitously, to 38 percent last year from 61 percent in 1993, according to the National Small Business Association.

“The result: Among small businesses, there’s more support than there was in the past for government action of some kind.”

Minnesota’s Mayo Clinic continues to be singled out for keeping costs down. The Economist, in an article headlined “Health-care reform in America: This is going to hurt,” notes:

“There is solid evidence to suggest that by cutting back on unnecessarily expensive procedures and prescriptions, anything from 10% to 30% of health costs could be saved: a gigantic sum. The Mayo Clinic in Minnesota and the California-based Kaiser Permanente system have shown that it is possible to save money and produce better outcomes at the same time. So reform must aim to encourage more use of managed health care, provided by doctors who are salaried, or paid by results rather than for every catheter they insert. Medicare, the government-run insurance scheme for those over 65, could show the way, by making much more use of results-based schemes and encouraging more competition among its various providers and insurers.”

National Public Radio is following the money in the health-care debate with a new investigative series called Dollar Politics. “These days, just about every interest has a lobbyist,” NPR says. “Drug manufacturers, hospitals, doctors, pharmacists, marriage counselors, chiropractors, unions; they all have people working the Hill for them. And that’s just a fraction of the groups. After all, the health care industry now represents one-sixth of the U.S. economy.”

A separate report out from Common Cause estimates the health-care industry has spent $1.4 million a day this year on lobbying, up 73 percent since 2000. The “Legislators under the Influence” report also found explosive growth in the industry’s campaign contributions to members of Congress.

Casey Selix, a news editor and staff writer at MinnPost.com, can be reached at cselix[at]minnpost[dot]com.