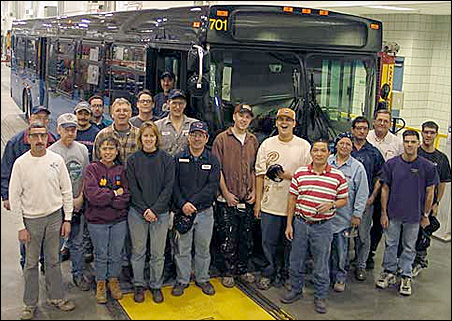 ST. CLOUD, Minn. — By now, this city an hour northwest of the Twin Cities was supposed to be a stimulus boomtown.

Home to New Flyer, the largest manufacturer of hybrid buses, St. Cloud was poised to benefit from a big chunk of the $8.4 billion in public transit money tucked into the stimulus package.

In March, the city drew Vice President Joe Biden and four Cabinet secretaries for a town hall at the factory. They promised that the stimulus would invest in transportation, energy and education and create a new “green” middle class and good-paying jobs — not a year from now but this spring and summer.

So where do things stand?
Five months since the bill was signed, New Flyer has yet to report hiring anybody because of the stimulus.

The city’s main stimulus road project hasn’t started. Nor has the upgrade of the veterans’ hospital heating and cooling system, the $1.6 million project to rehabilitate foreclosed homes, the weatherization job at City Hall or the new jet bridge at St. Cloud Regional Airport.

St. Cloud’s experience is like that of many American cities — still waiting for that promised influx of stimulus cash and wondering when it’s going to get here. 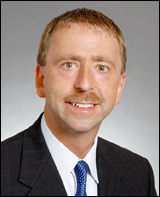 After months of political wrangling and news conferences to announce new funding, the stimulus languishes in a summer lull as projects simmer in the contracting phase. Few in the Capitol or the media know what to make of the $787 billion package. Even administration officials and congressional Democrats have waffled about whether the stimulus is working.

The verdicts lean toward the extremes: It’s moving too slowly. It’ll ramp up any day now. The stimulus has failed. The stimulus isn’t enough — we need another one. The economy is improving. The worst is yet to come.

According to Recovery.gov, about $60 billion of the two-year package has been spent so far, not including the tax cuts. Another $115 billion is in the pipeline awaiting contracts and required paperwork.

The road to St. Cloud says it all. An orange traffic sign informs visitors that for the next 49 miles, they’ll be on a road being repaired by the American Recovery and Reinvestment Act.

But on a recent day, as visitors drove past the barns and silos that dot Interstate 94, it was the only visible sign of any construction work.

Weathered the downturn
St. Cloud sits on the edge of the Rust Belt and the Western prairie. It is the first city of significance on the Mississippi River, which here is narrow and placid and crossed by an unremarkable concrete bridge. Garrison Keillor’s fictional town of Lake Wobegon is based on a town not far from here.

The city of 63,000 people is made up mostly of German Catholics, whose ancestors were drawn here by the black, loamy soil and by missionaries who came in the 1850s to convert the Ojibwe Indians.

Despite its lofty name (after a sixth-century French monk), St. Cloud became known as Granite City for the number of quarries that proliferated in the early 1900s. 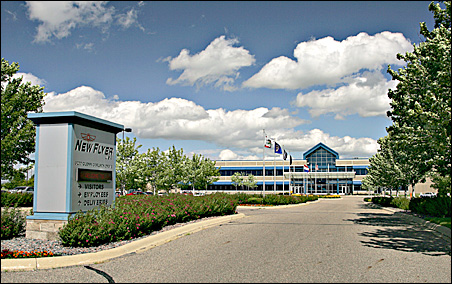 It’s a somewhat awkward nickname for a city now being hailed as a model for the future green economy. If you think of old industries, the plight of Detroit and the auto industry comes to mind. If you think back further, there’s Pittsburgh and steel. And if you go back further, there’s granite. With cities growing vertically, steel replaced granite as a primary building material in the 1950s, relegating it to the realm of monuments and gravestones.

St. Cloud nevertheless managed to avoid the fate of many Midwest cities. The downtown stretch of St. Germain Street is a mix of old and new. An appliance store and a restored movie house. A civic center and hotel connected by a sky bridge. The granite columns and yellow terra cotta dome of the courthouse. The angular glass facade of the Falcon National Bank.

St. Cloud has weathered the downturn better than most cities. Unemployment has actually dropped during the last two months, from 9.6 percent to 7.7 percent. Food and beverage taxes have shown double-digit increases for three months in a row, Kleis said.

“One of things that has been fortunate for the city — we’ve seen an increase in construction jobs, and that’s prior to the stimulus,” he said.

Kleis credits a well-timed bond issue that paid for a new library, law enforcement center and other major infrastructure projects, as well as the area’s diverse economy. Although manufacturing is important, two large hospitals employ 7,500 people. The area is home to seven colleges and universities. Some people commute to Minneapolis and St. Paul. There are dairy farms nearby.

And granite still has its place. The St. Cloud Correctional Facility, as many in town proudly and apocryphally point out, is home to the second-longest continuous granite wall in the world — next to the Great Wall of China.

Stands to win big
The New Flyer bus factory sits on the southeast edge of the city in an isolated business park near crop fields and the city’s sewage treatment plant.

A snake of a transit bus with an accordion center turns the corner emblazoned with “Clean Air Hybrid Bus” and transitchicago.com on the side. It passes a bus marked SEPTA, Philadelphia’s transit system, and one belonging to Blacksburg Transit in southwest Virginia. This is where many of the transit buses that grunt and hulk and crawl the streets of America’s inner cities roll off the assembly line. 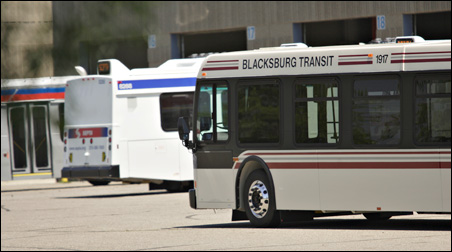 Photo by Jason Wachter
A bus manufactured for Blacksburg Transit in southwest Virginia, foreground, and another built for Philadelphia’s SEPTA system sit in New Flyer’s lot in St. Cloud.

New Flyer started in Winnipeg, Manitoba, in 1930, and opened its St. Cloud plant in 1999. Since then, it has become one of the city’s largest private employers, with roughly 700 workers.

Despite the economic downturn, the company has added 230 employees in the last two years, as rising gas prices and greater environmental awareness have led to a record number of public bus riders.

So far, the stimulus package has led to less than 100 new orders, New Flyer CEO Paul Soubry said. The company is still evaluating what impact the stimulus might have.  “It wasn’t a light switch,” he said. “I’m not too excited yet because there’s a long process.”

The deadline for transit agencies to apply for half their stimulus money passed on July 1, and in recent weeks, the Federal Transit Administration has awarded 343 grants, worth $3.2 billion. Chicago plans to buy 58 hybrid buses. Los Angeles County will replace 140 buses. Connecticut will spend $68 million to replace 136.

In part, transit money took longer than highway dollars to get out the door because transit grants, under an earlier law, must be reviewed by the Department of Labor to ensure that they won’t have a negative impact on transit unions, said FTA spokesman Paul Griffo.

New Flyer already has a backlog of orders and options for 9,800 buses worth more than $4 billion, Soubry said. More than three-quarters were for hybrid or natural gas vehicles. By comparison, the company produces roughly 2,500 buses a year.

At the town hall meeting in March, Biden heralded the company as a “pioneer,” “a true American success story” and “an example of the future.” In the months since, whenever discussing the stimulus’s role in building a green economy, administration officials have often highlighted St. Cloud and New Flyer.

But local leaders, while delighted by the attention, are skeptical the stimulus will mean big changes for the area’s economy.

“The New Flyer bus company was doing well before the stimulus package,” said Kleis, the mayor. “It will continue to do well because of the influx of stimulus dollars to transit systems around the country. There are going to be more buses; so because of that, yes … in that respect, it will continue their boom.”

Not looking for handouts
The adoption of St. Cloud as the model for President Obama’s green economy poses interesting political implications.

This is the congressional district of Michele Bachmann, a small-government Republican who famously said during the run-up to the 2008 election that she was concerned that Obama “may have anti-American views.”

“Nobody around here is looking for a handout,” said Teresa Bohnen, the chamber president. “That’s why I’m so doubtful that you’re going to see a lot with the economic stimulus. Because you know what? Largely in this community, nobody thought the economic stimulus was the right thing to do.” 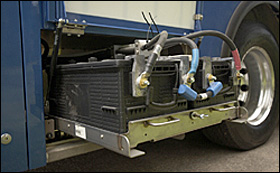 At a traditional German restaurant over a dinner of sauerbraten and spaetzle, Kathleen Virning and Jim Rugg argued that the stimulus package is yet another attempt by the government to intrude on people’s lives.

Virnig, 65, owns a Catholic bookstore in town, and Rugg, 76, ran an air-conditioning business before retiring. The two helped organize St. Cloud’s “tea party” on April 15 to protest government policies like the stimulus that they fear will lead to higher taxes.

“To me, it’s a bunch of money that we don’t have that is being thrown around to cull favor,” Virnig said.

“It’s a political move,” Rugg added, “but it has a mission to degrade the free market system.”

The $8 billion in the stimulus for public transit? An unneeded subsidy for a system that should sustain itself. The plan to bring high-speed Internet to rural communities? A grab for big telecom. Grants for “smart meters”? An attempt to dictate how much electricity people can use.

“The success story was a success story already,” Virnig said. “They’re taking advantage of that success. They’re just pumping it up a little bit more so that they can take the glory for it.”

Happy to have jobs
All the politicking over the stimulus is far above the dozen teenagers who are adding rocks to the shoreline of St. Cloud’s main lake.

They’re just happy to have jobs.

“I was looking all over St. Cloud, and this was the only opportunity I got,” said Martell Burson, 16, his face dripping with sweat.

One of the few signs of the stimulus in late June was a summer job program that will employ 192 people, ages 14 to 24. For four weeks, they’ll paint buildings, clear trails, pick up trash, distribute posters for an epilepsy walk and make hats for cancer patients. If they succeed, they’ll earn $980, minimum wage plus bonuses.

There is other action. The regional employment agency is training adults in electronics and health care. The school district used stimulus money to balance its budget and avoid layoffs. A third-generation printing company received a small-business loan that will cover it if it misses a bank payment.

For now though, the most tangible sign of the stimulus is an assembly line of four teens lifting football-size stones from a pile, passing them down and dropping them into the back of utility vehicle for a ride down to the lakeshore.

ProPublica is an independent, non-profit newsroom that produces investigative journalism in the public interest.