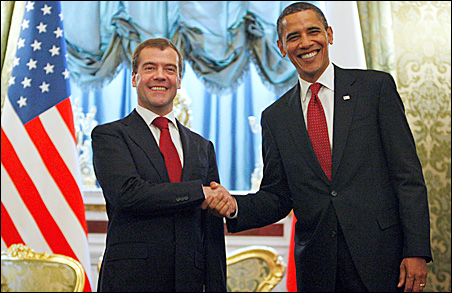 In the final days before Obama’s arrival in Moscow, the Russian President Dmitry Medvedev appeared to have had second thoughts about why he had invited the U.S. president. Medvedev must have felt Obama was at least a bit indiscreet in his public remarks in advance to the summit.

Although Obama promised both to spell correctly and push the “reset” button in Russia-U.S. relations, he pushed the wrong button when, in an interview with the Associated Press, he described Russia’s prime minister and former President Vladimir Putin as a relic of the Cold War past. The former KGB agent replied in kind, tacitly reminding Medvedev and Obama of just who really pulls the strings of power in the Kremlin.

Moreover, Obama’s interview with the opposition newspaper Novaya Gazeta was published on the day of his arrival in Moscow and led with his intention to push Medvedev on the issues of “democracy, human rights and the rule of law.” Obama’s remarks left the Russian president looking forward to this Wednesday — the day after his guest’s visit.

The Kremlin was a bit desperate in its efforts to drum up bad publicity for Obama. Last week, the Moscow city government approved a permit request for about 25 Russian gay activists who plan to demonstrate during Obama’s visit outside the U.S. Embassy and demand Obama move forward on single-sex marriages in the United States. (For the record, same sex marriages are illegal in the Russian Federation. Attempts to de-criminalize homosexuality remain mired in the political process, and Moscow’s police routinely beat up gay demonstrators.)

The main national television networks and news publications know what to say, or, to put it more accurately, what not to say. Advance news coverage of the Obama visit is conspicuously low. Even network weather predictions for the days of Obama’s visit over-emphasize the likelihood of rain and unseasonably cool temperatures. The powers that be in the Kremlin are both literally and figuratively threatening a cold rain on Obama’s visit because, as one Moscow pundit told Reuters, “the last thing they want . . . is Obamamania in the country.”

Meanwhile, Obama is texting and tweeting toward Moscow. Rumors on the street are working in his favor. One says that the American president loves the poetry of the great Russian poet Alexander Pushkin, (1799-1837) who also had African roots. His grandfather was Ethiopian. Another whispers that Obama is preparing the Russian equivalent of his “Cairo moment” when he will give a talk to the graduating class of Moscow’s New Economic School. Above all else, one rumor trumps the Kremlin’s promotion of Medvedev and Putin on Facebook and Twitter. The word is going around young Moscow that Obama is “friending.”

The big issues
From texting to issues of substance, the 2009 Moscow summit plays to Obama’s advantage. His bent for nuance and understatement suits well the modest gains to come from these meetings and does not aggravate the disagreements that remain.

There is no need to turn to hyperbole to describe the most significant and far-reaching agreement — the Russian willingness to grant us permission to cross through Russian airspace to deliver weapons and troops to Afghanistan. Those Americans who can remember the U-2 spy plane incident (1960) get it; those who don’t remember will never get it.

What is more, the issues that divide Washington and Moscow — the Missile Defense Shield in Poland and the Czech Republic, NATO’s eastward expansion, Ukraine and Georgia — suggest that both Russians and Americans in the post-Cold War era are repeating a mistake from past history. Our minds are set on fighting the last war, the Cold War.

We should not be surprised, therefore, that both sides are haggling down to the last minute on the renewal of the treaty with which Ronald Reagan and Mikhail Gorbachev brought the Cold War to an end in 1988. The START Treaty, which brought on deep cuts in the nuclear arsenals of both sides, expires this December. There is a proposal on the table that would renew the treaty and accept even deeper cuts, reducing our respective arsenals from approximately 6,000 to 1,500 nuclear war heads.

However, neither Medvedev nor Obama appear to be inclined to make this summit a Reagan-Gorbachev moment. Medvedev prefers to link the treaty to the politics of the Missile Defense Shield, which, in truth, he does not fear. Obama feels obliged to defend the shield, which he does not really want but which he publically supports.

Gorbachev is talking
The best and perhaps the most important stories of this Moscow summit are yet to come. The history of past Russian-American summits tells us that we will probably have to wait decades until the memoirs and talk shows appearances tell all.

These days it’s Gorbachev who is talking. He has his reasons for spinning his memories of encounters with U.S. presidents in a way that casts him as the statesman of statesmen. He gives the impression that he put up with a lot of nonsense dished up by the Americans and had to steer the conversations to the issues that mattered.

If we are to believe his remarks in a recent interview with Charlie Rose, Reagan once asked Gorbachev whether the Soviet Union would come to the aid of the United States in the event that we were attacked by extra-terrestrials. Gorbachev kept a straight faced and replied, “Of course.” The Russian President then moved the conversation to an understanding on a more likely threat. He knew from Soviet intelligence sources that Iran had the potential and intention to pursue the acquisition of nuclear weapons. They readily agreed that Moscow and Washington should quietly work together to see that Iran never entered the nuclear club.

It’s not likely that in private conversations Obama will return to the idea of a joint U.S.-Russia defense against space aliens. But it is extremely likely that he will remind his Russian counterpart that for the past two decades, Washington and Moscow — with both Republicans and Democrats in the White House and Communists and post-Communists in the Kremlin — have understood that they must work together to prevent Iran from acquiring nuclear weapons.

I look forward to Obama’s next memoir — the work not of the young man in search of his father but of an older Obama recounting how a strategy that kept nuclear weapons out of the hands of Teheran started with quiet summit diplomacy in Moscow.

Nick Hayes is a professor of history and holds the university chair in critical thinking at Saint John’s University in Minnesota. He may be reached at nhayes@csbsju.edu.

Is Russia having second thoughts about inviting Obama?